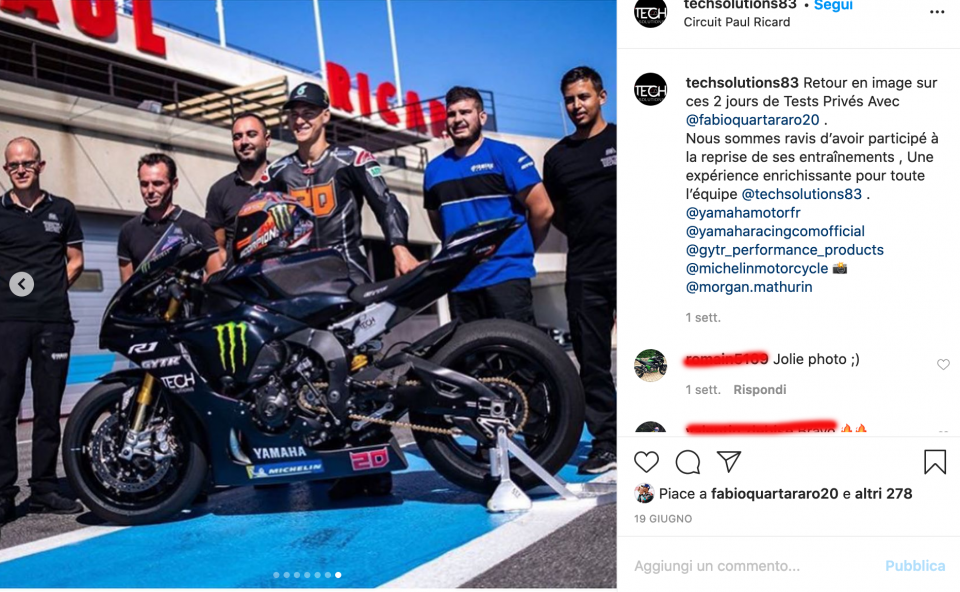 Following the issuing of an FIM press release announcing the start of an investigation into the alleged violation of Article 1.15.1 c) of the FIM regulations regarding motorcycles that can be used in private tests, even though the text does not make reference to any rider, one of the names made was none other than Fabio Quartararo.

The Frenchman in fact tested a Yamaha R1 on the Paul Ricard circuit in France in mid-June. This bike was prepared by Tech-Solutions. Both Quartararo and Tech-Solutions shared the test photos on Instagram.

It appears that a rival team noticed that modified parts were used to increase performance that are not allowed. Consequently, a formal protest was made.

This is where the FIM came to know about the issue.

The result is that, if this is confirmed, when Fabio arrives at Jerez he will have to appear before the FIM officials and explain the matter. However, no significant sanctions are expected.

It must be remembered that for MotoGP, tests are prohibited this year. An exception is represented by the teams with concessions. KTM and Aprilia can test with their usual riders. And both manufacturers have already done so.

The remaining manufacturers can only deploy their own test-riders with official MotoGP bikes.

For everyone else it is possible to train on the circuit with Superbike bikes. Road versions, which for safety reasons can be modified, even if, for example, carbon brakes cannot be fitted. Modifications to the exhaust, ergonomics and suspension are allowed and unnecessary parts such as mirrors and headlights are obviously removed. The tyres used must be commercially available.

Other more specific rules are indicated for Moto3 and Moto2 riders. For example in the middle class if you use a Triumph motorcycle, the engine must have a displacement of 100 cubic centimetres different from that of the Moto2 engine.

For Moto3, if a rider uses the same brand he rides in the race, there must be a difference of 50 cubic centimetres in the engine displacement compared to the Moto3 engine.

At this point the attention shifts to the whistle-blowers: what sense does it make to accuse a rival of having tested on the track with a production bike, even if prepared?

Who are these guys? It's OK to be aware of the movements of your rivals, but to split hairs on details of this kind seems really on the limit. Also because no prepared bike will ever be at the same level as a MotoGP bike. At this point it would be better, to resolve the problem once and for all, to do as in F1 where the teams can test, but with old cars.

Fabio Quartararo 'arms himself' for the battle in Austin