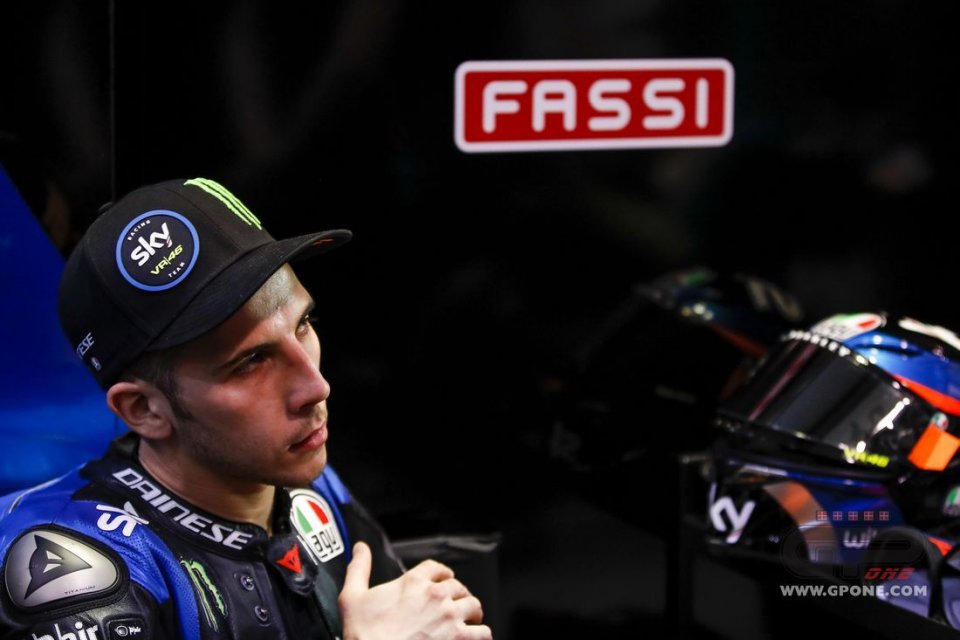 Andrea Migno is a Moto3 veteran. He debuted in 2013 and, since 2015, he's been in the cadet class. He was able to follow the evolution of a category that opens the door to young people in the World Championship, and he didn't like what he saw. A few weeks after the start, the rider from the SKY VR46 team explained why his goal is to leave the Moto3 and move to the Moto2.

Andrea, do you think this will be a key season for your career?

“Yes, mostly because I'd like to get into the Moto2, so I'd like to have a good championship. That's my goal, and I don't want to think about anything else."

Is the Moto3 starting to wear you thin?

“Honestly, I'm a little fed up because it's changed, it's become very strange. I don't think that the more you stay in the Moto3 the better you get. It's like a graph. During the first few years you go up, then you flatten out. That's why my goal is to switch to the Moto2."

How has the Moto3 changed?

“The races have become strange and often not very fun.It may happen that a fast rider is unable to get the same results as riders who are less talented but have other characteristics, such as being lighter or not as honest when racing. Now they're all group races. Until 2017, there was a small group of 8 or 10 riders and it was fun. Those who were faster could break away, make a difference, like in the premier classes. Now it's not longer like that. All riders are attached, and it's even more dangerous. Racing like this is only trouble. It's a class that I'd like to get out of, but I always think of it with great fondness."

Why this change in recent years?

"The bikes are very similar to each other, and there are only two manufacturers. There were more in the past, and there was a much nicer and varied championship. One circuit was good for one and the other was good for another."

Do you mean that with current bikes, the rider can no longer make a difference?

“You can't do it at all, it's easier during the tests. In qualifying, you can be very fast, but if you don't get into a slipstream, you start in 20th, and you ruin the race. You no longer only think about giving 100%. You have to, above all, think of the rest, find a good slipstream, and be careful not to get penalized and not go fast. When I watch the Moto2 and MotoGP races, I have more fun, they remind me of past years when we were doing normal races: at the beginning there was the group, the best would breakaway, then there was the final duel."

What could be done to improve the situation?

“I often ask myself. First of all, adopting the Superpole formula like in the MotoE, with one flying lap per rider, there would be time to do it, and it would become more spectacular. It would be a qualification that would respect the numbers on the field. The Moto3 has become one of the most dangerous categories in recent years. Some races are really absurd. For example, in Australia, you can race a second and a half slower than the best and risk winning the race. Last year, I had passed 1st on the finish line and, after two laps, I was 14th. To be able to make a difference, things become dangerous, you start paint-swapping. I don't want to name names, but there are very dishonest riders. I've gone to the Race Direction in the past to complain, even if they penalized me later."

Is there no solution?

“The main problem is that there's a trail of 20 or more riders both during testing and in the race, on all tracks because, even in those where slipstreams normally don't count, they make a difference in the Moto3. Everyone is always very close together. The strongest always wins. I do not want to say otherwise, but often the numbers on the field get really mixed up. In recent years, riders have raised their levels a lot. Bikes are very similar to each other and, in the end, it's a kilo of weight that makes the difference, more or less. When Marco Simoncelli was in the 125, even with his size, he was able to compensate in corners for what he was losing on the straights. Now that's very, very difficult to do."

Are you ready to start again now that you've resumed your motorcycle training.

“We were a bit rusty in the beginning, but I'm sure everyone is training, and it'll be as it always has been in Jerez. At the end of the first round, we'll be one second away from the track record. It'll be a different championship, like with fewer races and all attached. A zero will weigh more, and we'll have to adapt. But the gist of it will be the same."

Was it an advantage to have done at least one GP before the stop?

“It was certainly better, because the race gives you more information, but I've almost forgotten it by now. Sometimes I see the photo of Qatar and I almost can't remember."

“As long as we race, anything is good but, in general, I like the tracks we'll have. There are two things that I don't really like: the double race and no spectators, which is part of the show. Their presence is felt so much. Racing twice on the same track will probably be good for the show. We'll have very level races in the second week."