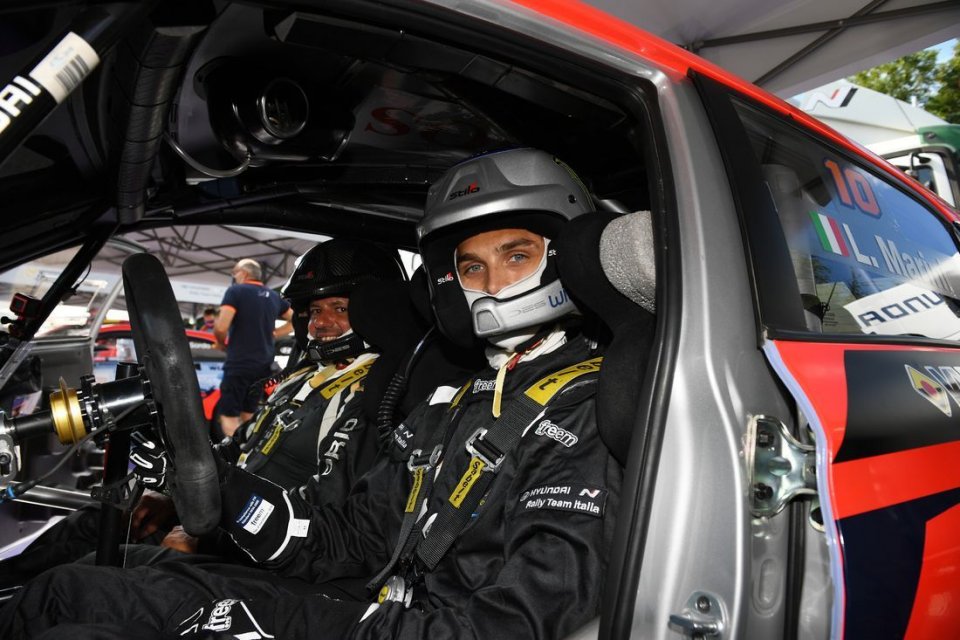 Luca Marini seems to be at home both behind a steering wheel and in the seat of a bike. In recent days he has tested the Hyundai rally car on the roads of Il Ciocco in an event organized by WithU and in December he had raced a Ferrari together with his brother Valentino Rossi in Abu Dhabi. Luca, however, has no intention for the moment of abandoning his Moto2 bike of the Sky VR46 team to go and do motor racing.

"I became passionate about four wheels growing up - he explained – when I was young I only looked at bikes, then I started to get passionate about Formula 1, afterwards rallies and I had an opportunity to race in the Monza Rally and in Abu Dhabi with Ferrari together with my brother. I've always had fun in the car. "

Have you ever thought about racing seriously in a car?

“I'd like to but it's complicated to organize. But it's a world I really like, it's safer because you're inside a cockpit, but the competition is real. I feel more comfortable on a circuit than in rallies, where you have to go flat-out on narrow roads, but when you drive, you let yourself be carried away ”.

"Racing drivers think differently, I'm not sorry I chose bikes, I feel more speed, in the car it seems you go slower."

Let's talk about your future. This is a strange year from a rider market point of view, is it an interim year for you?

“For anyone who thought they had a chance to do a great season and then go to MotoGP, everything is postponed a year. If I were stay in Moto2, I see it as an opportunity to win more races and improve my statistics. "

“It's all so strange that there may be other surprises between here and Valencia. I don't want to say anything, but you never know. The teams that have yet to decide will wait for the first races, let's see what will happen ”.

What do you think of the probable pairing in the Petronas team of Rossi and Morbidelli?

"In MotoGP, the relationship with your teammate is different from what is in the lower categories, it is as if you are in two separate offices, one on one side and one on the other, there is not much talk between them. In my opinion, a teammate in MotoGP is relative, while in Moto2 and in Moto3 one is in close contact, the box is smaller, there are fewer people. We look each other in the eye, they are more separate. I work a lot with my teammate, in MotoGP it is more difficult to do that. Sure, if there is a good relationship, coexistence is easier. "

Would you have agreed to race in the same team as your brother, like Alex Marquez did?

“For sure! I don't see any particular pressure, you must have a teammate, whether it’s Valentino Rossi or another very strong rider. I don't see it as a problem. "

Is there not a risk of being ‘recommended’?

“It’s acceptable that Marc put a good word for his brother… if he did. God forbid, it's the beauty of being brothers, you help each other. Indeed, it would have been nice to see Alex for another season in the official Honda team, he would have deserved it, but now it seems he has been put to one side. I did not expect that".

The same thing happened to Petrucci too.

"In that case, I expected it a bit more. Ducati wants to win but it is still missing something to beat Marquez, Dovizioso himself said so. So you have to find that little bit extra in the rider or bike, they are trying with Miller, otherwise you will finish second and I guess that’s not good for Ducati. "

Have you ever thought about which bike you would like to ride in MotoGP?

"I grew up in the Yamaha garage, I am emotionally tied to them, but now the level in MotoGP is incredible, all the bikes are going strong, Aprilia seems to have done a great bike, KTM has Pedrosa as a test rider so he will do a great job, Suzuki, Honda and Ducati are awesome. Now, wherever you go, you end up with a good bike, you need a team where you can feel at ease. "

You could ask Valentino to leave his seat to you...

What was it like getting back on the bike after the lockdown?

"Nice, I immediately returned to a good level. It always works like this; first time out, you wonder if you still remember everything and then second time you go like you did before the break ".

We are getting closer to a return to racing...

“These last days before we start are taking ages, but I feel ready. I trained really well in this break, without any hurry, I think I will get to the first race in excellent shape. I also worked with my team to prepare for the races, as I have a new crew chief and telemetry guy. "

"I think it could not have been done otherwise, but I can't say I like it, especially since there is no Mugello. In addition, two races will be held at Aragon and Valencia, two tracks that very few riders like. Even the double race does not convince me, but I understand that it is useful to increase the number of GPs and limit movement ".

Do you expect a different championship than usual?

“With so many races close together I think that in the end we will get tired less, it is worse when the championship lasts a long time and then you want a break. In this case we will stay concentrated for 4 and a half months, 24 hours a day, it will be OK. I don't think the values on the track will change, but you have to be careful, the risk of injuries will have to be taken into account, you will have to crash as little as possible, otherwise you will throw away the championship. "

What goals will you start with?

“I am stoked, like everyone else, because we have never been without races for so long. I believe that right from the first free practice session on Friday morning we will already be rocketing away. Maybe it will be strange not to have the fans, but for me it won't be a big problem, it's something you only notice when you exit and enter the pitlane. "