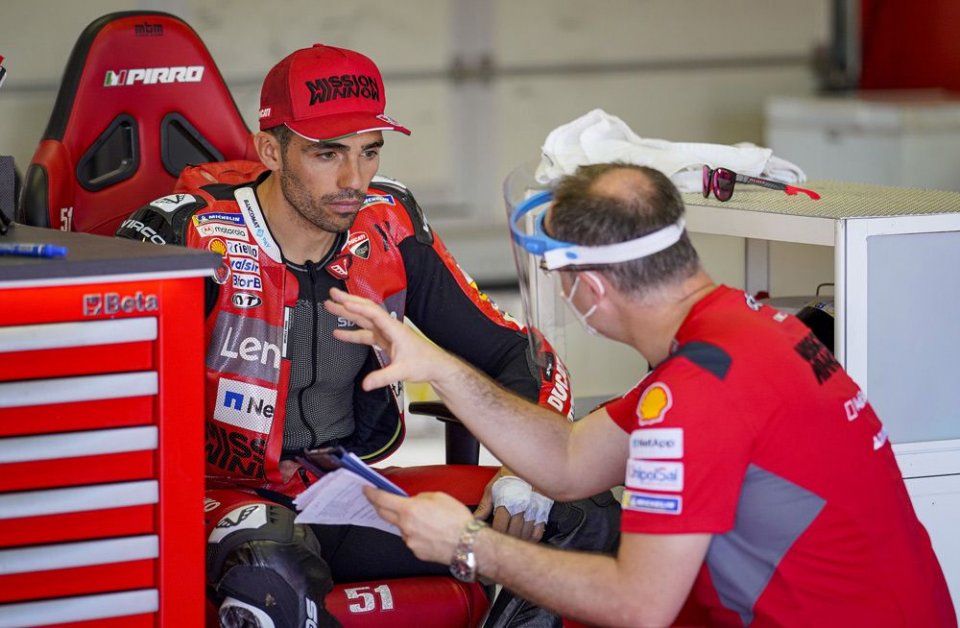 The Ducati test team and Michele Pirro concluded three days of testing in Misano, returning to the track after the long suspension caused by the Coronavirus emergency these past months. It was since the Sepang shakedown during the first week of February that the rider from San Giovanni Rotondo hasn't been on the GP20, and now he's  started preparing again for the MotoGP 2020 season, which will finally start July 19th on the Spanish circuit in Jerez de la Frontera.

Thanks to the favorable weather conditions during these three days, Pirro managed to complete the work program established along with the team's engineers, reaching a total of 178 laps and achieving good results, setting his best time at 1'33"000 the last day.

In addition, the Ducati test team was also able to experiment with the safety protocol that will be adopted during the MotoGP events scheduled for this year. Besides the use of personal protective equipment, the Italian team has also introduced a communication system between the technicians and riders via microphones and earphones, so as to allow for normal conversations in the pits, while maintaining the appropriate safety distances.

"It's been three days of great tests, which have allowed us to regain confidence with the bike after the long break these months," Michele Pirro said. "Despite the heat, the recently resurfaced track was in excellent condition, and it allowed me to feel immediately at ease. We got good time results, which give us confidence for the two races scheduled in September. In addition, we worked on various electronic components, as well as on some aspects that remained pending after the Sepang shakedown test, and we're sure that, thanks to these three days, the Ducati riders will be ready for the first event in Jerez and be immediately at the highest levels of competitiveness."

Valentino: “I remember him when he was racing. As a team manager, he was my great rival in the 250 with Capirossi and in the MotoGP with Gibernau and...
5 hours 4 min ago

MotoAmerica and AMA have given the green light to the RS 660 model to compete in the Twins Cup starting next season in compliance with the...
6 days 1 min ago

For 2021, Herrera will take part in the WorldSSP Challenge, featuring at the European stages of the championship, which currently make up the first...
6 days 4 hours ago