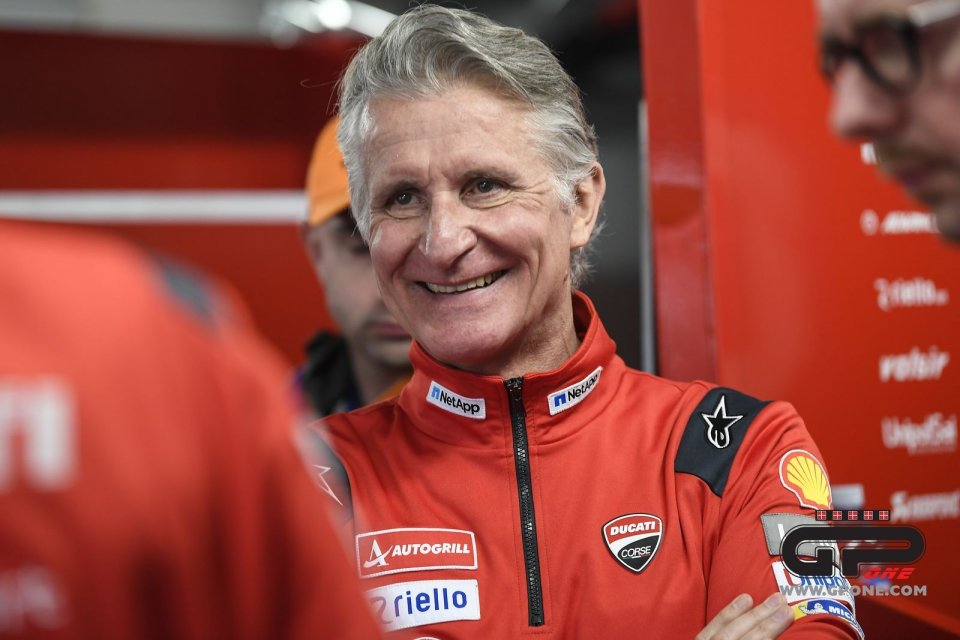 Lin Jarvis' declarations on Jorge Lorenzo, intent on returning to the track at the end of his unproductive year as a Yamaha tester due to Covid-19, have triggered a series of hypotheses, even suggesting his return to Ducati.

As always, Paolo Ciabatti says he knows nothing, but with Andrea Dovizioso's renewal that's dragging on, probing is a must.

So we discovered that Ducati seems inclined to wait for the first five Grand Prixs of the year before reaching a decision on Dovizioso. The negotiations therefore, haven't stopped, but maybe both sides thought it better to take a breather and let the first two races, Jerez and Brno, pass to then meet again after the Red Bull Ring-2.

It's no coincidence that the circuit on which to predict a (double) victory for the Desmosedici GP20 seems possible. A success that could make Dovi realize that, after all, victories are more important than money. But this is our idea and not what Ciabatti said.

“I don't like to talk about having the upper hand, " the Ducati sports director explained on the phone while he was going to Misano. "But, actually, those who have one of the best bikes can. And we have it. And I must also add that, if Marquez did not exist, Dovi would have won three world titles. But, obviously, I'm not giving a speech... But that we're slow in our choices isn't true. We think Miller, who is really talented, can make a breakthrough. Then we hope that Bagnaia will show what he's worth, and there's still Zarco."

In short, Ciabatti returns to sender, namely us, the accusations of not having attacked the market with a sufficient decision. And he explains it.

Ciabatti: "Quartararo wanted to stay in Yamaha. It was his priority."

“Quartararo was a very difficult objective to achieve because he wanted to stay with Yamaha. When you're 20, it's a logical choice. His first goal was to have an official M1 this year, and he got it. To offset this, Jarvis asked for a two-year. After all, having Fabio keep the bike with which he made his amazing and unexpected debut in the MotoGP was a priority. We must not forget that we're talking about twenty-year-olds, even though they're mature. In three years, Quartararo will be 24 and could decide on a whim and even change bikes… In the meantime, he can race without concerns, which he would not have been able to do if he had changed his plans."

Albeit. But it's difficult not to agree with Ciabatti regarding Fabio Quartararo, and even his manager, Eric Mahe, had confessed to us during the Sepang tests that he had never had a written offer from Borgo Panigale. So we can say that Ducati, with Fabio, didn't even try, since they were convinced of their own reasoning on how he would not have had a chance. Right, but this is equivalent to not courting a girl because she's too pretty or already engaged. That's not a great demonstration of character.

“Things went differently with Vinales," Ciabatti continued to explain. "He got a proposal directly from Japan, offering him the role as premiere rider. After so many years in Rossi's shadow, he must have been strongly motivated, undoubtedly."

Ciabatti: "Marquez wanted to stay in Honda, which paid him 20 million per season."

That makes two of us. But, basically, Paolo Ciabatti is right. Like Ducati, that would have zero titles without Casey Stoner, Honda without Marquez would still be looking for a rider to have their bikes win. That's why they took on Martin. But Ciabatti didn't speak about this.

The impression is that Ducati is now waiting for the end of a cycle: Marc Marquez's.

"It's not true that we didn't contact him," he revealed. "The truth is, he immediately told us that his priority was to stay with Honda. And the Japanese secured him with a figure that, if it's not 20, it's 15 million a year. There's little you can do on a financial level against them."

So while Ducati waits for the hostilities to start again, they'll be waiting on the sidelines July 19th in Jerez. They're already looking beyond 2021, a season in which they could appear on track with two riders with an annual contract.

“But they may not. It's not true that Dovizioso is thinking of quitting. That's what Carletto Pernat says ..., Ciabatti concluded with a little jab at his manager friend from Genoa.