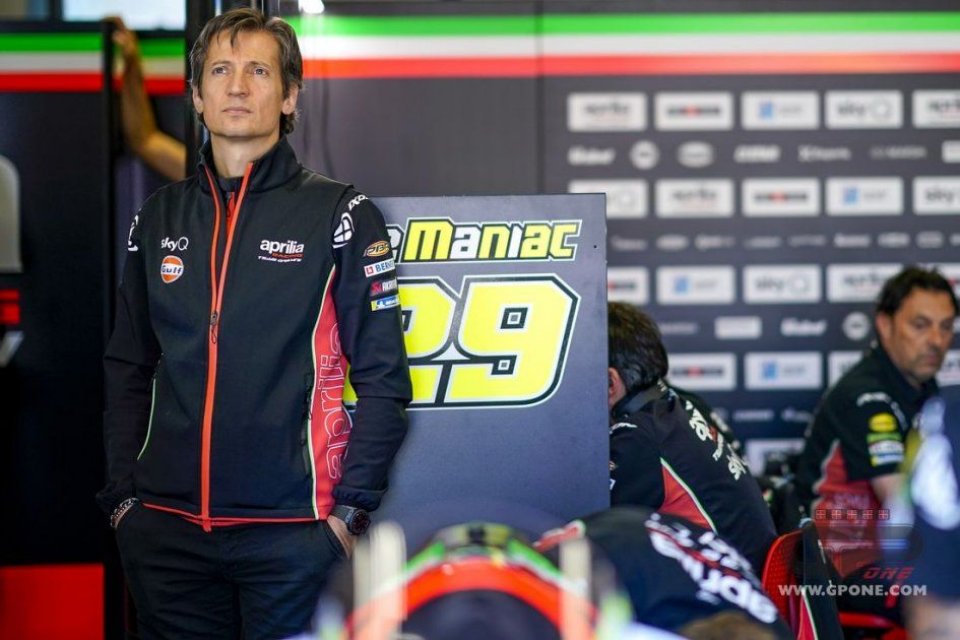 It is too early to say if it will be a positive year or not, but there is a new atmosphere in Aprilia. This was declared by Massimo Rivola, CEO of Aprilia Racing, one of the manufacturers involved in the three-day test which started at Misano today. It’s a declaration that instils positivity, all the while keeping ones feet firmly planted on the ground as it should be.

“Since the end of May we had the opportunity to resume work - he explained - and we’ve done it at top speed, to make up for lost time. Today we have been worked in many different ways: we have tried something new with the chassis, and in the next few days we will try some more new stuff. As for the engine, we have decided which one to homologate, so then we can think of everything else. I think it is too early to say that it is a completely different Aprilia bike, but we can say that it is a different Aprilia company for the environment and the air that we are breathing: there is enthusiasm and a desire to emerge, growing without haste ".

Continuing with his report, Rivola underlined the priorities of the day.

"We are moderately satisfied with the day, I give it a mark of 6.5, both for the good number of laps we did and for the almost total lack of problems, given that the bike is almost new. Bradley (Smith, Ed.) could count on greater confidence with the bike having also ridden it two weeks ago, while for Aleix (Espargarò, Ed.) today was his first real return to the bike: we are also satisfied with the work done by Lorenzo (Savadori, Ed.) with the RSV4 1100 ".

Obviously, we also had a look at the timesheets, which Pol Espargarò topped having set a fastest time of 1m33.00s, against a 1m33.90s by Aleix Espargarò and 1m34.00s by Bradley Smith. These nine-tenths of a second might appear to be an abyss, but Rivola wasn’t particularly concerned.

“We know that this is not our best track, seeing as there are a lot of accelerations from low down, while KTM set a second place in qualifying here and has certainly done more kilometres than us in this recent period. We didn't look for performance today, but a base from which to start, which we found. Aleix is ​​a rider who always aims very high, so he didn't like seeing that gap, but it is right that he should: the renewal of his contract has certainly galvanized him, he knows he has a future with us and is working to improve ".

It was impossible not to talk about Andrea Iannone, for whom the situation remains at a standstill, and in the first GPs he will be replaced by Bradley Smith.

“As far as Iannone is concerned, I have no news, we await the sentence continuing to consider him innocent. We are the injured party in fact, since if things were to go wrong, we would be the last team to look for a ride on the market. Bradley gave excellent feedback from a physical point of view; he did 75 laps which are quite a lot. Today for the first time he was able to ride with his teammate and being able to stay close to him immediately motivated him. This is important - he concluded - because we need him to take that mental step forward to go from tester to official rider, and he is doing that ”.