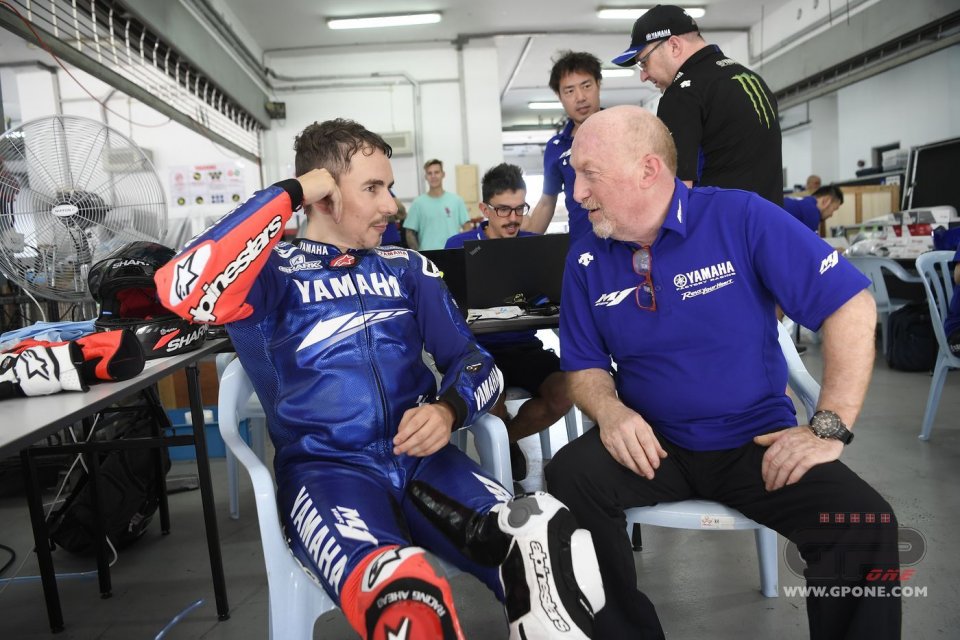 The fate of Valentino Rossi and Jorge Lorenzo continues to be tied by a double thread: seeing Jorge sign for Yamaha in his new role as tester, after the announcement of his retirement, was a relative surprise.

Finding out shortly after that he wanted to do some races as a wildcard instead made it clear what the real intentions of the five-times world champion were.

"Jorge wanted to do some tests and a race this year. But I think he had a second goal - Lin Jarvis told Speedweek - He also wanted to find out if he was still interested enough in returning to racing. I think he had a strong interest in finding out if he was still fast enough, comfortable enough, competitive enough and if he could regain his old self-confidence with Yamaha, but we had no place for him in Yamaha if Valentino decided to continue racing and signed for the Petronas team. Jorge should speak to a competitor if he wants to race an entire season again. There are manufacturers like Ducati who have not yet completed their squad. They have only signed one contract. "

If, therefore, the Iwata manufacturer wants to keep Lorenzo in its ranks, it will have to propose a contract as a test rider again, but is it able to do so?

“If we accept a new contract, it must be interesting for both partners and have a value for both - continued Jarvis - At the moment all I can say is: we will wait and see how many testing days we will be able to do this year. Then we will decide together with Jorge whether or not to continue the collaboration. We have a one-year contract. If we are both happy, we will talk about it. But many things have changed because of Coronavirus - Jarvis admitted - The financial capacities of most companies have also changed. We need to rethink the issue and reopen it in the autumn. "

The fact is that tuning fork manufacturer does not have the possibility of using Jorge Lorenzo this year. The problem is the test team: they are Japanese and cannot travel freely.

This is why Jorge will not be in Misano next week.

“It would be easy to get some of our mechanics to prepare a bike for Jorge for Misano. But if we just go out on the track, without any significant purpose, without any concrete objectives, without any new parts to test and without any engineers responsible for the test team, it makes no sense. Jorge would benefit, he could enjoy four or five hours a day lapping the track. But if we don't have any new material, what’s the point? "

So we go back to the initial question: waiting for Yamaha to decide - and it even has to decide if it still has the possibility of maintaining a test team - are there any manufacturers willing to sign ‘Por Fuera’ for the 2021 season?

There is actually one manufacturer that would need someone like Jorge. It is Italian and has won two world titles with Jorge Lorenzo: Aprilia.