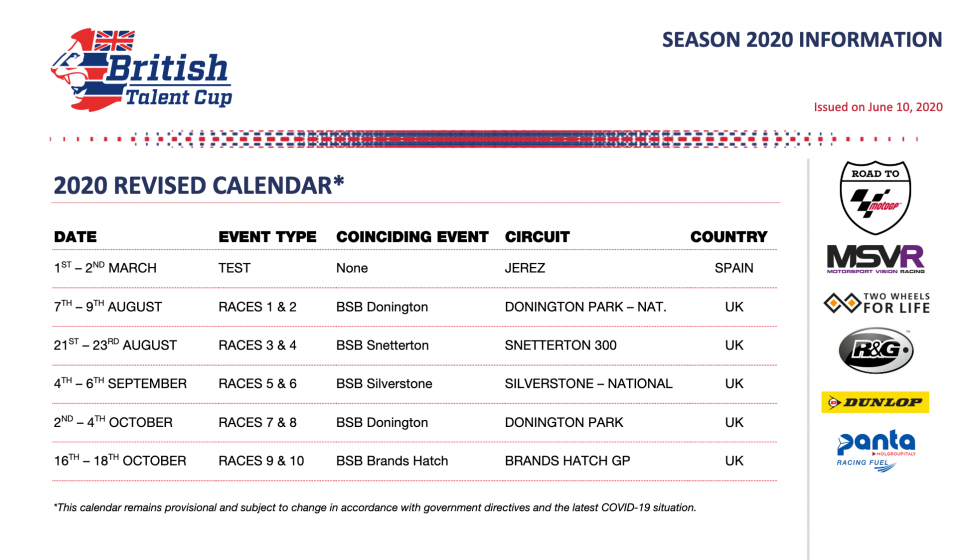 The season opener takes place at Donington Park on the National circuit from the 7th to the 9th of August, before the paddock heads for Snetterton (300) for the second event. Thereafter comes Silverstone (National) to be followed by a second visit to Donington Park, this time on the GP layout, before the finale at Brand Hatch (GP) in mid-October.

"This has been an incredibly challenging period, but the enthusiasm, commitment and passion from everyone involved in the championship has been outstanding - said Stuart Higgs, Bennetts British Superbike Championship Series Director - To reach the position of announcing a provisional calendar is a big step forward. Naturally we are very disappointed that several of the traditional circuits have had to be omitted, which has been as a result of very detailed assessments of the operational, logistical and economic consequences pertinent to all circuits arising out of the COVID 19 pandemic. The firm message though is that we look forward to a full array of circuits returning in 2021.

At the moment it’s unclear whether these events will be run behind closed doors, with spectators as normal, or with reduced capacities. This will become apparent in the coming weeks as advice from government evolves. However given our activities are outdoors at venues where you can easily social distance, we are cautiously optimistic we’ll be able to welcome fans to at least some of our race weekends.

For now though, the focus is continuing to prepare the various protocols and operational detail to ensure the safety of everyone in the BSB community."

"We're very happy to see the new provisional calendar for the British Talent Cup announced as it marks a key step forward towards seeing competition begin for the Cup this season, and after such a long delay following initial testing. Our Road to MotoGP programmes like the British Talent Cup are very important to Dorna and a key focus for the future, so to be able to now announce a BTC calendar and start working towards making that a reality is very good news", said Carmelo Ezpeleta, Dorna Sports CEO.