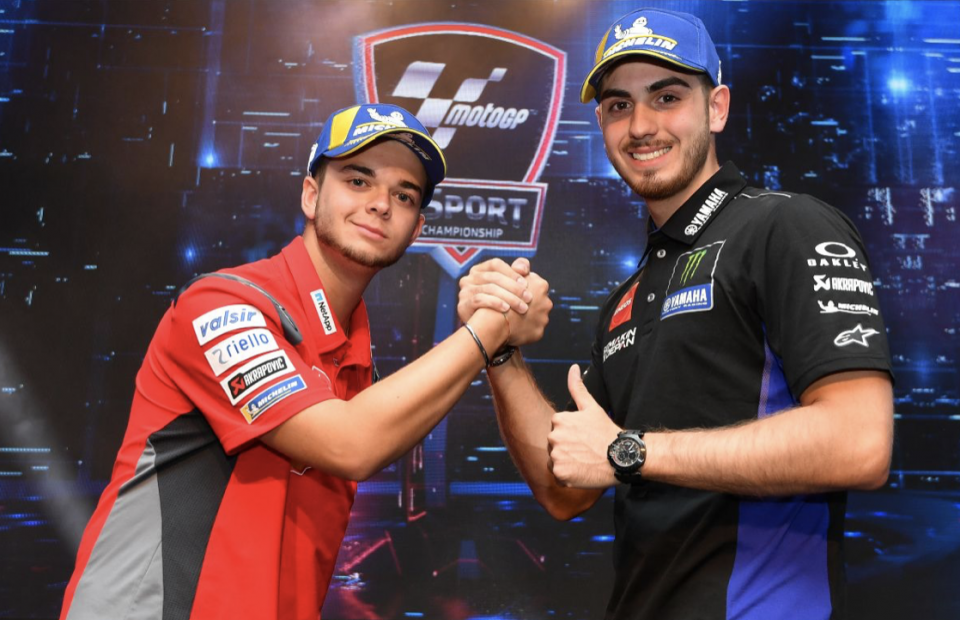 The final stage of the 2020 MotoGP eSport Championship is edging ever closer, with the line-up for this year’s Global Series now finalised and announced via the Draft Selection.

The eleven riders – hailing from four continents – will each represent one of the current MotoGP teams in the four-round Global Series, and have been chosen after some stellar time-attack performances in the Online Challenges. A total of 22 gamers (16 from Europe, 6 from the Rest of the World) were entered into the Draft Selection phase, and the 11 competitors heading through come from Australia, Brazil, Indonesia, Italy and Spain to make up a strong Global Series entry list.

The reigning MotoGP™ eSport Champion (real name: Andrea Saveri) remains with Ducati Team for a second year for his title defence. The 19-year old Italian from Bologna has been an eSport regular since 2018, when he finished third overall.
Reserve Rider: 阿仁_15 (Taiwan)

trastevere73 (real name: Lorenzo Daretti) is the closest thing to MotoGP™ eSport royalty. The Italian secured championship victories in 2017 and 2018, which convinced Monster Energy Yamaha to secure his services for 2019 – when he finished just two points off the top.
Reserve Rider: Vindex813 (Italy)

FooXz – real name Henrique Botton – will make his debut appearance in the MotoGP™ Global Series after some inspired showings in the Online Challenges. The 26-year old took maximum points in the Pro Draft and becomes only the second competitor to represent Brazil in the Global Series.
Reserve Rider: wallydj (UK)

Previously known as adrianDP26, Williams_Adrian (real name: Adrian Montenegro, brother of Williams_Cristian) was undone by inconsistency in the 2019 Global Series, when he finished fifth, but he had excellent showings in the 2020 Pro Draft.
Reserve Rider: Motero_1 (Spain)

Another name with plenty experience, EleGhost555 (real name: Francisco Javier Santiago) will be keen to put the disappointment of the 2019 Global Series behind him when competing for Aprilia Racing Team Gresini in 2020. The 22-year old Spaniard finished second in 2018, but only placed seventh a year ago.
Reserve Rider: Joel_Clay (Spain)

Another new name, Sanshoqueen (real name: Mulkanarizky Kane) will be one of two Indonesians in the 2020 Global Series. The 22-year old was something of a revelation in the Pro Draft, amassing 70 points from a possible 75 to gain a seat in the ultra competitive Petronas Yamaha SRT squad.
Reserve Rider: JulitoCampeon15 (Spain)

A string of excellent performances in the 2019 Global Series helped Moe (real name: Putut Maulana) gain a large following in his native bike-mad Indonesia. He finished eighth in last year’s championship and is only getting better.
Reserve Rider: PieroRicciuti55 (Italy)

Arguably the surprise package of the 2019 Global Series, little was expected of Juan_nh16 (real name: Juan Antonio Nuñez) before he took his Red Bull KTM Tech 3 to fourth in the championship.
Reserve Rider: Riky (Italy)

A returning face for 2020, Davidegallina23 was an impressive performer in the 2018 MotoGP™ eSport finals but didn’t make the cut in last year’s series. Now the 19-year old Italian (real name: Davide Gallina) is back.
Reserve Rider: Jack Hammer4659 (UK)

Fans of the Championship will be familiar with MrTftw (real name: Christopher Telep) after his incredible journey to last year’s Global Series – having no previous experience in bike racing prior to buying MotoGP™19 early last year. MrTftw quickly learnt the secrets of the game to sensationally qualify for the Global Series and is back in 2020.
Reserve Rider: bushino47 (Morocco)

Get ready for more scintillating action in 2020 as the MotoGP eSport Championship powers up, and stay up to date on all the latest at motogp.com and esport.motogp.com, as well as across social media platforms including YouTube, Twitter, Instagram, and Facebook.