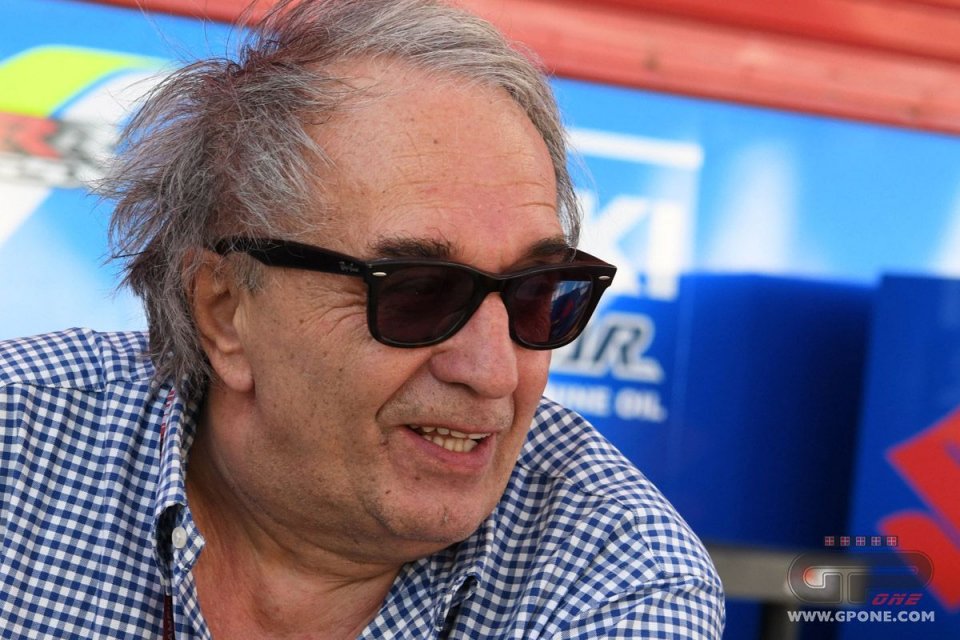 The MotoGP rider market, with the arrival of Jack Miller in the official Ducati team, is going through a period of renewed excitement. The ‘hot’ names of the moment are Danilo Petrucci, Andrea Iannone and Andrea Dovizioso, with Valentino Rossi always on standby and involved in negotiations with Petronas. In our now usual Live session with Carlo Pernat together with Paolo Scalera and Matteo Aglio we have had a look at all the topics of the market and beyond.

“I am a big fan of Miller - said Pernat - he has all the characteristics of ‘ignorance’ and talent to do well. I don't know if he is the right man for the world title, but it is certainly a big coup for the market, they had been preparing it for some time. "

But why do Ducati continue to offer its riders one-year contracts with only an option for the second year?

“At Ducati they have always done two-year contracts, now they have changed their strategy for both the official team and Pramac. At Ducati they hope to be able to pull a new Stoner out of the hat and, as a result, they always have a free seat available. "

You mentioned the Pramac team, how do you see Pecco Bagnaia?

“Bagnaia's contract expires at the end of the year and if he has a season like last year, I don't think Ducati will confirm him. So for next year there may be two free seats in Pramac in 2021. Martin is an option, then there is Bastianini and Baldassarri ".

"A line has been drawn under Lorenzo's return to MotoGP"

Could Zarco be another option for Ducati?

"I really don’t think so; he might go to Pramac, but the policy now is to go looking for young guys, we are in a period in which a lot of MotoGP riders are getting old. Johan only went strong with the Yamaha, he never adapted to the KTM or the Honda ".

What about Petrucci's situation?

“Danilo has three alternatives right now. The first is Superbike with Ducati which will formalize an offer for the next two years. The second is Aprilia but we will have to see Iannone's situation. While the third could be to go to Lucio Cecchinello's team, but Honda will have a veto on that seat in the event of Crutchlow stopping. "

Does Lorenzo still have any chance of returning to Ducati?

“A championship without wild-cards has drawn a line under Lorenzo's return, but perhaps he has done the same as well. Ducati's sin was not confirming him, because if they had done, they could have fought for the world championship the following year. "

"Iannone can return to Ducati"

At this moment, the future of Andrea Iannone is a bit of a concern; if he is not acquitted, what might Aprilia do?

“We said it before, the idea of having Petrucci could also go ahead because Danilo's manager (Alberto Vergani, Ed.) is very capable. Iannone could also end up in Ducati, with Miller that would be a truly ‘ignorant’ squad. Then Andrea is training really hard, he has been able to understand a lot of things in his life and Dall'Igna has a special regard for him ".

How did things really go at the end of Iannone's relationship with Ducati?

"There was that cursed weekend of Termas de Rio Hondo, when Iannone caused the crash with Dovizioso. Before that race we had agreed on everything with Ducati but that day in the box Dall'Igna was really very nervous, he came in and said to me and Battistella (manager of Andrea Dovizioso) "We’ll talk about the contracts in three months’ time". I had never seen him so angry. "

"Marquez wants to win with two bikes because Rossi did it"

Will we ever see Marquez in Ducati?

“In 2015 Ducati and Philip Morris wanted it but after what happened in Malaysia with Valentino Rossi the slate was wiped clean with Marc. Now maybe this slate has gone, and I think Marquez wants to win with another bike, because Valentino did it. "

Valentino Rossi's comments with BT Sport in which he said he was not afraid to retire have also been a subject for discussion in these days, what do you think he will do?

“What Valentino' said is more than acceptable. In recent months he has thought about it a lot, but from the information I have he will probably continue. The only problem is with the team he wants to bring to Petronas. Rossi would like to bring all of his guys while it seems that the team will only allow him two. The people who form part of Rossi's team all travel in business, this might seem to be bullshit but it is actually very important, especially in this period when Petronas has reduced the retainers of its employees ".

Why do you think Valentino wants to have his team in Petronas too?

"It's all a matter of psychology and then Valentino has nothing to learn from anyone."

And if Vale decides to quit who could join the Petronas team?

“I think his brother, Luca Marini, but the Sky Racing Team VR46 has confirmed both him and Bezzecchi for Moto2 in 2021 ".

We are getting closer to the restart, how do you feel about the resumption of the championship?

“The news coming from other sports is encouraging for MotoGP. F1 has got the go-ahead to start in Austria and the championship will also restart in Spain shortly. But I will tell you more, I am convinced that from the second weekend of Misano the paddock will be open to the media and I know that there is an evaluation underway to allow the public access to the stands too. "

Johann joked about the incident at the end of FP2. "I'm in the good group but I’m not riding relaxed, I'll look at Bagnaia's data to solve the...
47 min 2 sec ago

"The recovery surprised me. It was faster than I expected. I had surgery on Monday, and I could already train on Wednesday. I'll have to see how I...
2 hours 47 min ago