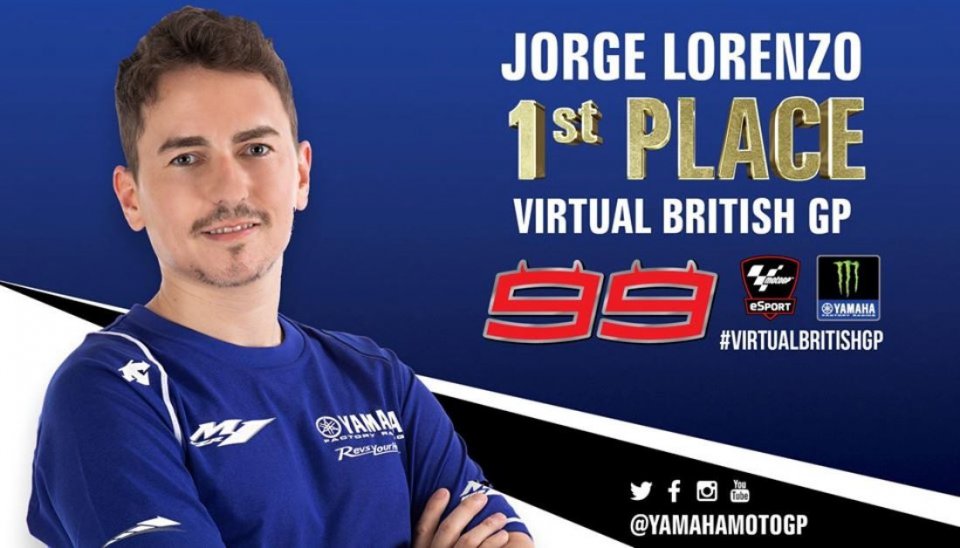 All eyes were on him, and he didn't disappoint. We’re talking about Jorge Lorenzo, who made his debut today in the world of virtual racing, doing it in his own inimitable style. Jorge did not just take part; he took pole position and then the win, despite a crash (caused by the ‘usual suspect’ Nakagami) after a few turns. "I have always been a player of the PlayStation since I was a child - Jorge said in the usual live post-race interview aired on the MotoGP Instagram profile - especially with video games such as MotoGP or Formula 1."

He stepped up the training in the last few days, and you could see the results.

“In these days I practice with my friends and I have become quite good. It was not easy to win: at the third corner Nakagami entered like a bull, took me off the track and I crashed like I did last year in Barcelona (laughs), but luckily I did not lose concentration, I knew that the race was long and that there would be a lot of crashes from the other riders".

The last opponent to beat was Tito Rabat, who tried to destabilize the Majorcan without success. Lorenzo was also helped by training with Trastevere73, Yamaha's official Esports rider.

"Tito was saying ‘Why today, why today? The first time I was going to win you have to be there’, so I apologize (laughs). When I do something I always do it completely 100% with my friends I try to win, so even in video games I always try to do my best; you can also see it from the outside, since while I play, I am completely focussed, I don’t play around and I almost never speak. I went practising two times with Trastevere, he gave me some tricks in entering and exiting corners and it helped me take the victory. "

Jorge enjoyed the world of virtual races, but obviously his first thoughts remain the real ones.

“It’s a completely different world, because on a normal bike you are feeling the bike. But in terms of concentration, it is quite similar, since you have to be very precise, so it can be a good training. For the moment I need to understand when and where the next test will be. I saw KTM testing in Austria, so hopefully we can make a test as soon as possible: I had a lot of fun with my bike in Sepang, and I’m looking forward to doing it again".

Speaking of real races, it is impossible not to think of the fact that he can’t do a wild-card race at Barcelona because of Covid-19.

"On the one side I am sad, since I really wanted to race, but on the other side I am aware that without enough tests I don’t think I could be competitive. That's okay. In any case, Now I keep training: obviously, not as hard as when I was a professional racer, but I keep fit and I try to keep as healthy as possible”.