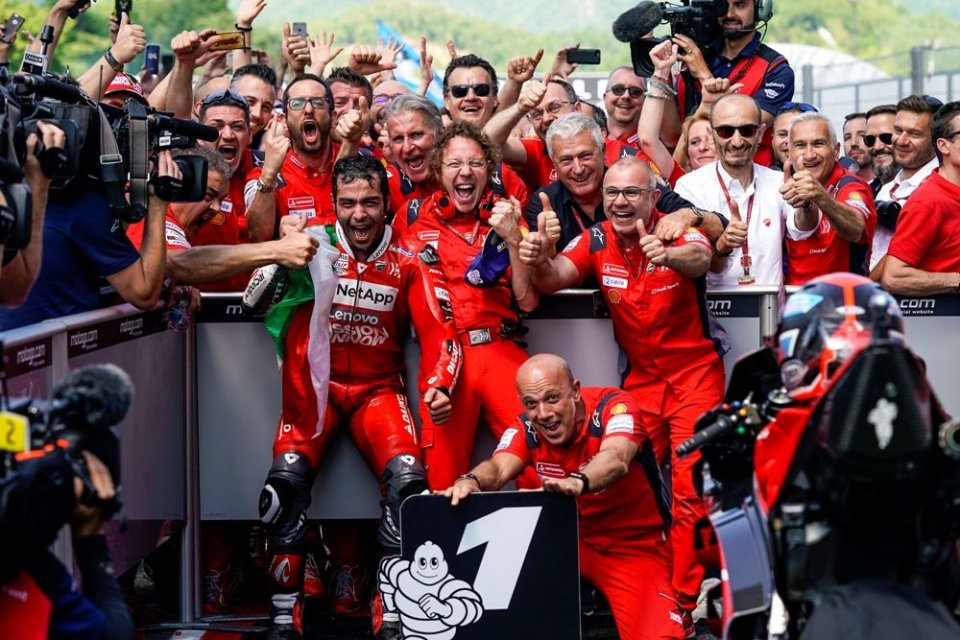 One thing is certain: it’s going to be a long hot summer on the rider transfer market front. For a start, Ducati has yet to sort things out in view of 2021 and in amongst all this there are some riders who risk remaining on the sidelines. The ‘hot’ name is undoubtedly that of Danilo Petrucci, who as we know has had to deal with the promotion of Jack Miller in the official team.

The news of the choice of the Australian was communicated some time ago to his manager, Alberto Vergani, who, as we all know, closely follows the Terni driver. Vergani is now trying to figure out which path to take in a completely new market, since to date there hasn't been a race in the premier class.

"This year the market is very particular - said Vergani - I say this because not one race has been held and we rely on the results of the second part of last season. It is a very particular and strange situation, but these are the dynamics".

Alberto, one of the ‘hot’ names in this market is Petrucci. What is the situation at the moment?

“Danilo is currently out of the Ducati project in MotoGP. Ducati has decided to focus on a rider like Miller, who has long been a pet project for Dall’Igna and for Danilo there is no place in the factory team. It is very strange, given that he won at Mugello last year in front of Dovizioso and Marquez; he also always worked hard putting his head down to get certain results ".

But if Dovizioso were to accept the KTM offer, could there not be a seat for Danilo?

“Dovizioso will remain in Ducati, this is my opinion. 99% I think Andrea will not leave the Rossa, but he will stay where he is now ".

Going back to Petrucci, how hard was it to take in this decision?

"It wasn't easy when I told him, but this is the situation and there isn’t much that can be done about it. When Danilo joined the factory team, nobody asked him to win the World Championship. He has worked hard and in an honest way, at Mugello he achieved a victory that will go down in history. Unfortunately, the market was decided on the basis of the second part of last season. Of course, I'm disappointed, but I am of the opinion that any negative situation can turn into an opportunity. I always say: ‘worry when things are going well’”.

You mentioned the word opportunity. On the spot question: Aprilia or Ducati SBK?

“As I have read in your articles several times, Ducati could reposition him in Superbike with Aruba and consequently we are evaluating this. At the same time, I also started talking to Aprilia, but at the moment there is nothing concrete. A lot will depend on what Iannone will do in 2021 and how the situation related to his disqualification will evolve. "

Danilo in Superbike with Ducati could be a cure-all for the paddock. Don’t you think so?

"I would say yes, but we need to carefully evaluate things, since there is currently nothing concrete. At the moment Petrucci is 30 years old and in MotoGP he could race with another bike, in order to show his potential after the adventure with Ducati. Certainly, if he were to arrive in Superbike, it would not be as easy as maybe many observers think to win the title in the first year".

“As I said, we are evaluating all the available cards. Certainly, Aprilia is a manufacturer that has great ambitions in the world championship, and it could be an opportunity. At the moment, however, and I repeat, there is nothing concrete, also because Aprilia already has two riders.”

Staying on the topic of the market: is there a deadline to resolve the issue?

"There is currently no deadline. I say this because Dovizioso is the pivot of the market and everything revolves around him. When Dovi decides what to do then all the other pieces will fall into place. "

What if Dovizioso were to leave Ducati for KTM? Then what would Ducati do?

“I honestly don't know, I read about Iannone, but I don't know anything else. At this moment it is not easy to understand how the market will evolve and with Danilo we find ourselves in a particular situation, as has happened many times in the past. I always say one thing to him: "work hard, be committed, time is a gentleman".

The World Championship will probably start again in July. What sort of Petrucci can we expect with Ducati’s future virtually sorted?

“Danilo will have to tackle these races in a serene and carefree way. He will have to try to give his all, aware of what his qualities are. This market is a sort of sliding doors, but I am convinced that in the end negative opportunities always arise. This is what I say to Danilo every day."