The diatribe between Jorge Lorenzo and Giacomo Agostini is still on going. A few days ago, in the Gazzetta dello Sport, Ago criticized the rider from Mallorca for his poor results on the Ducati. Jorge wasn't happy with that commen,t and a long-distance repartee started between the two.

Today, Lorenzo decided to respond again to the fifteen-time world champion through a long post on his Instagram page, next to a photo of Giacomo at his debut with Moto Morini.

"I hope that, one day, I won't have to deal with the new generations, fossilizing myself in the memories of my victories, comparing the future with my past and saying: 'Back in the day... . 'I  believe that Mr. Giacomo Agostini has to understand that every era in motorcycling has its own history, each champion has its own importance in the context in which he lived, both in terms of rivals and technology.

For example, even if in the 1960s they raced on circuits with a very low safety level, many times, the difference between the fastest and the slowest bike was about ten seconds. Some runners took advantage of this, so much so that they were able to race (and win) in different categories in the same year.

Although technology was already advancing, it was still light years away from the current one. (We're talking about motorcycles with spoked wheels and drum brakes.) Over the past few decades, both circuits and technology have made enormous progress. With a single control unit and mono-tires, things balanced out among all the bikes. Constructors look for every little advantage that makes them beat their rivals, and many victories are obtained by a few thousandths of a second...

When, after 45 minutes of competition, a second separates the first from the fifth, this means that every little detail is needed to reach an advantage and be able to win. In this context, things such as an aerodynamic detail, an adjustment to the electronic map, or some edges of the tank, become crucial for this purpose.

On the contrary, when the difference is measured in tens of seconds, minutes, or even laps, small details become insignificant. And, yes, you can also settle for imperfect ergonomics.

And this, dear Giacomo, is an irrefutable truth.

So, when someone (who knows the circumstances and the facts) claims that I have not achieved results in Ducati, I can't help but be surprised.

With all due respect, I think that resorting to a 'Back in the days...' or pure 'results' to assess the ability of a champion in modern times, seems like an inappropriate platitude for a legend like you." 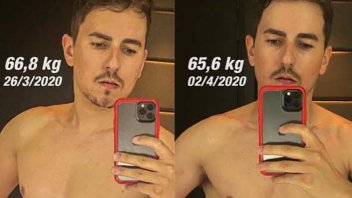 The Californian Yamaha rider took the flag alone ahead of teammate Gagne and Herrin, who beat the Ducati rider in a photo finish. Elias crashed out...
3 days 14 hours ago

Defending champion wins ahead of Scholtz and Gagne. 5th and 7th, Wyman's and Jacobsen's two best Ducatis. Elias stopped by a problem.
4 days 6 hours ago

The reigning champion started has started 2020 in the best possible way, heading his teammate Jake Gagne. Race 1 at 22:00 on Eurosport
5 days 3 hours ago