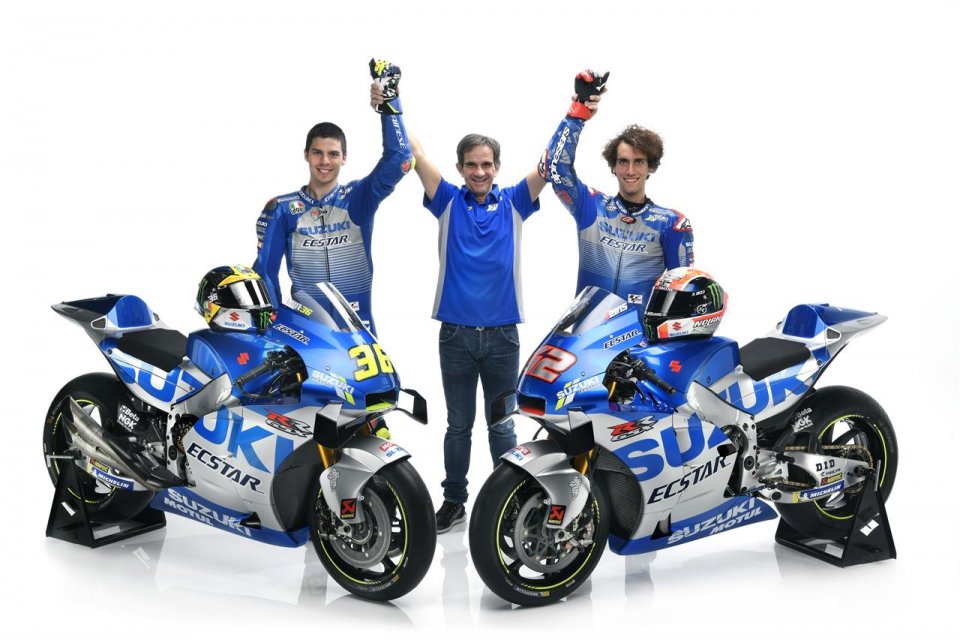 The start of the MotoGP championship, the renewal of contracts with Rins and Mir, the birth of a satellite team: Davide Brivio, Suzuki's team manager, touched on many topics during a virtual press conference.

What he first spoke about was having confirmed the two riders.

"Rins' and Mir's renewals were easy. I didn't even have a Plan B"

"I have to admit that the negotiation was pretty easy," Brivio said. "I'll tell you about some ins and outs: in April of last year, I went to Japan to meet with the company's top management, and we had expressed the will to continue with Rins and Mir for 2021/2022. Shortly after ,Alex told me that he'd be willing to sign immediately. We had to wait for the moment to do it, but it was already decided. In a certain sense, it was even simpler with Mir because we had an option in our favor, but we were already in agreement with him since the middle of last year."

Suzuki was so confident that it didn't even test the waters.

“We didn't have an actual Plan B ," the team manager confessed. "I talked to managers of other riders, but it's normal, there was never a negotiation. With Rins and Mir, we have a duo that could start a cycle with which we'll be able to fight for important goals. I don't underestimate our opponents, but I know we can face them openly."

Brivio's hope is that the two can urge each other on.

"I think they started to feel this competitiveness during the tests, in a positive way," he said. "I hope they'll continue this so that they'll urge each other on and raise their levels, like what happened in 2018 with Alex and Iannone."

The goal is to aim high.

“Logically, I hope this will be the best team in recent years, because we always want to improve ," the manager continued. "I'd like them both to fight constantly and for the first five or six positions. There's not one number one in Suzuki but actually two, and it'll be the track to decide who's the best."

"Ducati has to keep Dovizioso, He's their collateral"

Brivio also briefly talked about the situation on the riders market and how Ducati's still at the dock.

“I don't think they need my advice, but I also think Dovizioso has really showed that he's been the rider closest to Marquez in recent years," was his opinion. "What would I do? From a sporting aspect, I wouldn't give up on Dovizioso. He's an assurance for Ducati. Then I'd identify the rider who could replace him in the future and put him at his side to make him grow."

With the market closed, the manager faced a freeze on development.

“I think it was a good idea " he made that clear. "First of all, it's a question of fairness, since they were able to continue working in Japan while they weren't in Europe. Then it's a question of containing costs. Everyone's budgets will be lower, and we're considering several options, including shorter race weekends. We've had several meetings with manufacturers, and they've been productive. There's a great atmosphere of cooperation. There are a couple of ideas that will soon be discussed by the Grand Prix Commission."

Racing this year will also be useful in preparing for the future.

“2020 will be a special season, but 2021 won't be normal either. This year will be a dress rehearsal for next year," he explained. "I think this situation will also affect the riders' salaries, although perhaps the ones who'll be making the most sacrifices are those who'll be earning less."

"The championship will be shorter, but the players will be the same"

As for the championship, which should be starting in Jerez in July, Brivio doesn't think that things will change much.

"I think the riders in the first three positions will be the same," he said, "and, logically, Suzuki will be the surprise of the championship. Maybe the stop will be have an influence on this. We'll have to understand who'll be most disadvantaged but, I repeat, I don't think it'll change much. Surely they'll have to be fit and concentrated for three or four months at the most. It'll will be a good workout. Starting off well will be essential because recuperating could be more complicated."

Even the track they're going to race on can have a lot of influence.

“Logically, we would prefer not to have two races at the Red Bull Ring and instead have them in Assen and Silverstone, but it seems like the opposite will happen," the team manager said smiling. "Like it or not, that's how things are, and we have to accept it. But we won't start off defeated. If Yamaha got on the podium in Austria, why shouldn't we? However, no manufacturer has thought about their interests on this issue, but only those of the championship."

The next step will be to understand the emergency health protocol.

“We're waiting," Brivio explained."I think that we'll consider the team as if it were a family, as far as distance is concerned. Logically, the risks cannot be decreased one hundred percent. A vaccine is needed. Life in the paddock will change a lot, but we have two months to prepare for it."