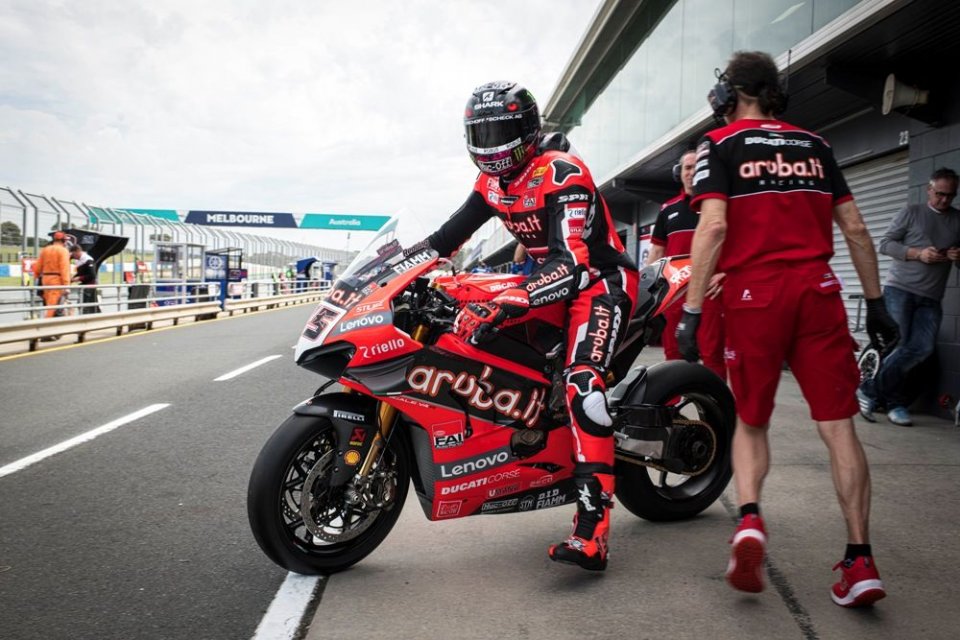 The only image we have of this SBK World Championship is that of the inaugural round of Phillip Island. A race surrounding which there was no lack of expectation at Ducati, especially for the debut of Scott Redding. For the occasion, the Briton put in a consistent performance, finishing on the lowest step of the podium in every race.

While Scott showed that he had got to grips with the Panigale V4, Chaz Davies on the other hand was forced to play catch-up. So, for Ducati the results of Phillip Island showed two sides of the coin. However, it is too early to draw conclusions, as was explained by Marco Zambenedetti, the engineer in charge of the Superbike project.

Although track activity is stopped, in Borgo Panigale they are studying how to take remedial action should the situation arise again in the future. Now the only thing to do is wait, as question marks still surround a resumption of track activity.

"We are experiencing a particular situation, where the health of all of us has priority,” declared Zambenedetti. “In this regard Ducati has equipped itself to create an internal task force going across all departments, with the aim of putting protection measures in place. Since last week there are in fact all the required measures. Among other things, a shift system has been adopted for workers in order to maintain the lowest number of people present inside the company".

This particular situation has also had an impact on development…

"Sure. However, it must be underlined that in Superbike there is more of a freeze on development since we are talking about production bikes. The development of production-based bikes is much more stagnant than the MotoGP bikes that we have been hearing about in recent months. "

Marco let's go back to Phillip Island, which is the only race to date. We saw two sides of the Ducati…

“In my opinion, the bike-team and riders package proved to be competitive. In fact, I think we are more solid than last season, given the knowledge of the V4 and the behaviour found on all the tracks. I would therefore say that in this 2020 we are better off in our starting condition ".

One thing that stood out in Australia was the fact that Scott was not able to pass on the straight. Why? Does it depend on his weight?

“To answer this question, I want to make a brief introduction first. Phillip Island was the first race for Redding, and he didn't want to dare too much. In fact, he did not exploit the potential of the bike at 100%, also because he had never raced with Pirellis before. Among other things, we should remember that Australia has always been a particular track. Having said that, Scott carries more weight than Bautista, but this is not the decisive problem”.

So, what was the problem?

“In Australia there was no lack of speed when exiting the curve, but rather acceleration and power from fourth gear onwards. Among other things, we had to deal with new bikes such as the Honda and the Yamaha that have raised the bar, while we carry forward regulations from 2019 that oblige our engine to remain frozen. In fact, I hoped that they would revise the regulation regarding engine revs and concession parts ".

How much do these 250 rpm less than Assen last year have an influence?

“The 250 revs less affect the extent to which you reduce the power and the range of use of the engine, as a result they limit you in other parts of the track. For this reason, you have to arrive at a compromise between gear ratios and rideability, having to keep fundamental components at a standstill, such as work on the airbox, mapping and the exhaust ".

At this point what can be done? Because the risk is that Ducati will no longer overtake as happened with Alvaro.

“First of all, I regret not being able to have a second verdict of this on other tracks. The fact is that at Ducati we have some good ideas about which way to move. One of these concerns the improvement related to rider ergonomics and weight distribution, in order to get the bike to behave more effectively in the areas where we are most lacking ".

In addition to Scott there is also Davies, who was forced to play catch-up...

“Chaz finds it more difficult to be effective with the V4 than someone like Redding, who has a style closer to that of Alvaro. With regards to Davies' performance, I believe that a large part of Phillip Island's results was due to the qualifying session where we were unable to make the most of the qualifying tyre. We certainly have great faith in him, since after the victory of Laguna Seca we managed to make a massive leap forward. I would also add that I don't expect a year like 2019, in fact I am convinced that he will do much better. We worked mainly with him on the rear suspension, trying to get the power down on the ground".

When do you think we will get back on track?

"Good question. That's what everyone is asking. At the moment when we come back, I would like a group test to be held with all the riders, as happens for example in Phillip Island, in order for each rider to find the sensations he is missing on the bike again".