“I check the phone every day but, for now, I haven't seen anything. I hope Valentino sends me at least one WhatsApp or something like that," Razlan Razali stated. Razali is team principal for Petronas, the team in which Rossi should be racing next year.

Recently, the Doctor made it clear that he is almost convinced that he'll also be racing in 2021. Yamaha, on the other hand, has already promised him a bike that is completely identical to the ones that the official team duo, Vinales and Quartararo, will ride, but with other colors.

All they have to do is reach an agreement with the Malaysian team but, for now, there have been no contacts between the parties yet, which is what Razali told Crash.net.

“So far, nothing, so let's keep the door open." the manager continued. "If it happens, we'll certainly consider it. We'll not ignore him. He's a nine-time world champion and is really important in terms of marketing and exposure."

Even if the Petronas team should be developing young riders, they'd be happy to make an exception for Valentino. "We have to understand what he wants," concluded Razali. And we feel like we should add how Yamaha will intervene in this operation.

Everything is at a standstill for the moment, but Razlan's phone could ring soon. 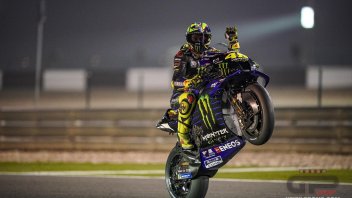 Rossi: "I won't go to Petronas just to say ‘ciao’ to the fans"

Until May 29th, you'll be able to buy some of the best shots taken during the World Championship. All proceeds from sales will then be donated to the...
20 hours 1 min ago

The two first events of the season have now been authorised. The first race week will take place at the Circuito do Estoril, followed by the...
1 day 26 min ago

The Californian Yamaha rider took the flag alone ahead of teammate Gagne and Herrin, who beat the Ducati rider in a photo finish. Elias crashed out...
5 days 1 hour ago

Defending champion wins ahead of Scholtz and Gagne. 5th and 7th, Wyman's and Jacobsen's two best Ducatis. Elias stopped by a problem.
5 days 17 hours ago

The reigning champion started has started 2020 in the best possible way, heading his teammate Jake Gagne. Race 1 at 22:00 on Eurosport
6 days 15 hours ago