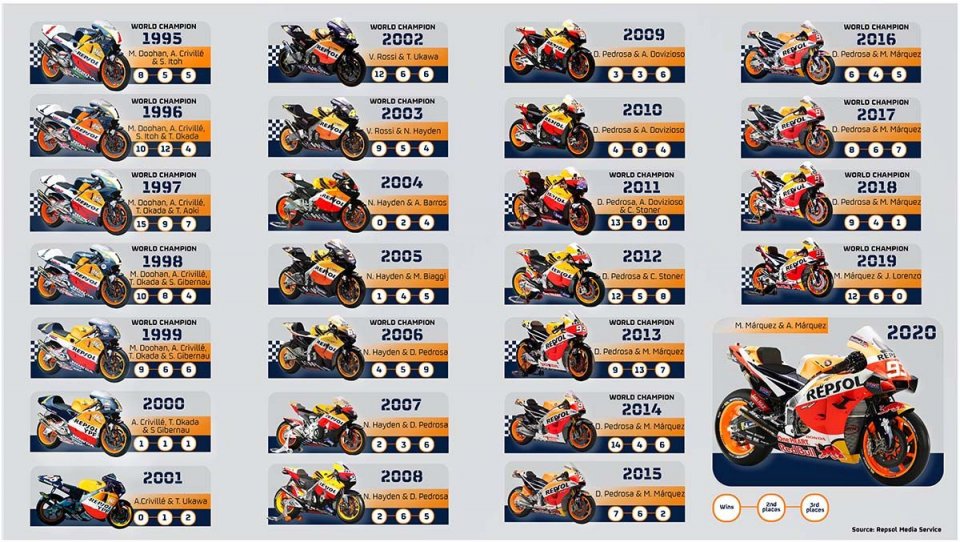 Whether it be the NSR, RC211V, RC212V or the RC213V, the capital letters have written pages in the history books of the Motorcycle World Championship. Since Repsol and Honda joined forces in 1995, the most powerful team in Grand Prix racing have always fought for victory in the premier class. The alliance has allowed them to become the outfit to beat for the past 26 years, and their motorcycles -always recognisable for their characteristic orange rims, form some of the images most associated with top level racing.

The collaboration between the two great companies started with the unforgettable 500cc, two-stroke NSR. These machines defined an era, achieving 5 consecutive titles between 1995 and 1999 with Mick Doohan and Álex Crivillé, before four-stroke motorcycles appeared on the scene.

With a 990cc engine and around 220hp, the RC211V debuted in style in MotoGP. Valentino Rossi was responsible for achieving the first two titles in 2002 and 2003, and Nicky Hayden the last, in 2006. A regulation change to the 800cc meant the debut of the RC212V, with which Casey Stoner managed to win the crown in 2011.

The current 1000cc bikes, the RC213V, are ridden by Marc and Álex Márquez, who will try to continue at the top of the class. Marc, the current MotoGP World Champion, has accumulated 6 of the last 7 titles in MotoGP, in a career that has already become legendary.