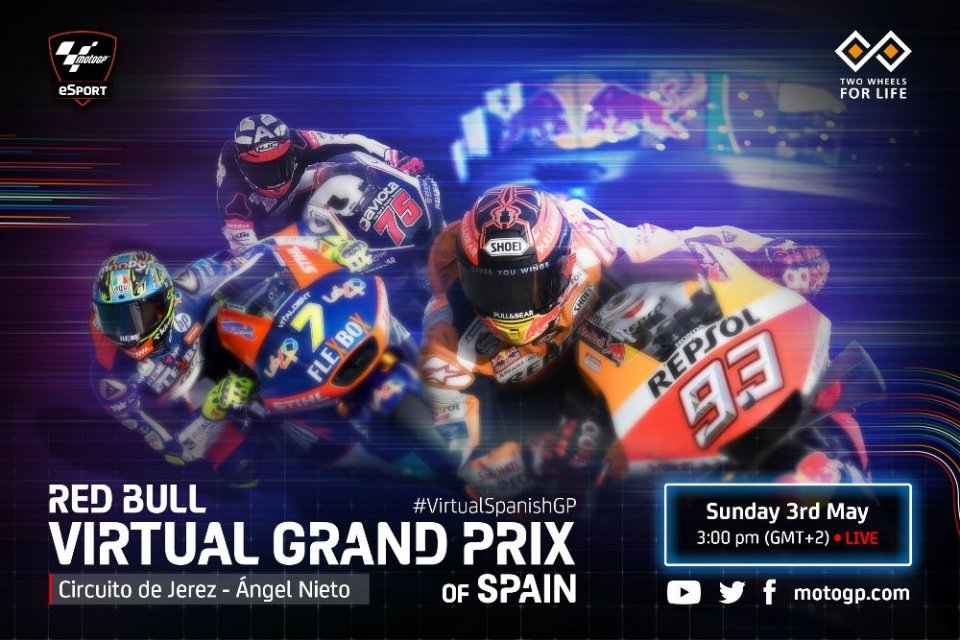 The news was already official, but now we also have names. The third virtual race in the history of the MotoGP will take place on Sunday May 3rd at 3 pm, and it'll be an actual Grand Prix, with all three championship classes racing. A significant step forward, which will undoubtedly raise the show and entertainment level, also thanks to the use (for the first time) of the MotoGP20, the latest version of the Milestone series, already available to the public since April 23rd.

The premier class will have 11 riders compete in 13 laps, half the number compared to a real championship race, while 10 riders from the two minor classes will be doing 8 laps (35% of a "real" race) to show their skills with their joy pads in their hands. For a more realistic effect, there will be a real post-race press conference for each category, which will be broadcasted on the MotoGP's Instagram profile starting at 5pm.

Speaking of the line-ups, each team in the MotoGP will be represented by a single rider, with the exception of the Repsol Honda team (which will have both Marquez brothers) and the Tech3 team, which will be able to count on both Iker Lecuona and Miguel Oliveira. Obviously, the winner of the last virtual race at the Red Bull Ring, Pecco Bagnaia, will also be present, as well as Maverick Vinales who, unlike during the Austrian stage, will not be joined by Valentino Rossi.

As for the Moto2, there's no shortage of prominent names in the category. There will, in fact, be two Azzurri who got on the podium in Losail, namely Lorenzo Baldassarri and Enea Bastianini, with Luca Marini completing the team. The winner, Tetsuta Nagashima, will not be present, so Jorge Martin will replace him on team Ajo.

The Qatar winner will instead be present in the Moto3, since Albert Arenas confirmed that he'll be racing. As for the other Azzurri: Dennis Foggia, Niccolò Antonelli, Riccardo Rossi, and Tony Arbolino, they will all be present.

Below is the complete list of participants, class by class: