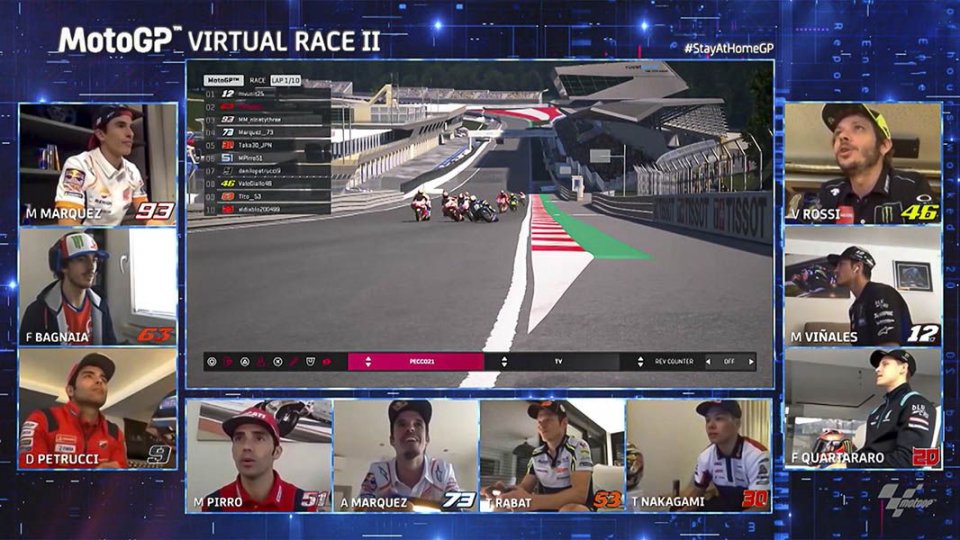 The virtual Grand Prix has become a pleasant diversion for the competitions during this lockdown, but the MotoGP riders hfaven't given up. From Valentino Rossi onwards, many have accepted to challenge each other with the official World Championship video game, first on the Mugello track, then on the Red Bull Ring track.

The fans loved it, making this initiative a success. Today, the third virtual GP has been announced, which will take place on Sunday, May 3rd. During this weekend, the championship would have been racing in Spain, so Jerez was chosen as the stage for this challenge.

What's new for the virtual GP? We won't only be seeing the MotoGP on the track, but also the Moto2 and Moto3. So all classes will be represented in the simulation of a tried and true race weekend.

As for the MotoGP, each team will be able to field one rider, while Honda, with its the world champion, will have two. Instead, the Moto2 and Moto3 will have ten riders, with priority to the Top Ten of the actual classification.

The event will support the Two Wheels for Life association in the fight against the Coronavirus.

The riders who will take part in the Jerez Grand Prix, which will start at 3 pm on Sunday, May 3rd, will soon be announced.

The 2020 Champion bade farewell to the Honos Superbike Championship by taking wins #15 and 16 of the season. For Lorenzo Zanetti a second and third...
1 day 18 hours ago

“I wasted too much time with Zarco, but Johann wasn’t smart because he let Mir break away and slowed me down.”
2 days 12 hours ago

PHOTOS - The KTM rider will have to serve a Long Lap Penalty in the next race, same penalty for Daniel in Moto2
2 days 15 hours ago

Increased penalties, but only in the cadet class, for those who slow down on the track: ranging from a Long Lap Penalty to being excluded from the...
3 days 1 hour ago

"The second tyre had no grip in qualifying. I didn't help Dovizioso, there was nothing planned, he was just behind me”
3 days 17 hours ago

“If he keeps the same pace of the FP1, he’ll win with eleven seconds of an advantage, but nobody asked me anything, and I wouldn’t do it either way....
3 days 19 hours ago

On the day of the announcement of his move to Moto2, the 2020 Champion obtained yet another pole of the season, distancing his rivals by more than a...
3 days 22 hours ago