The desire to get back on the bike is huge, especially when you want to start a new chapter in your career. Dennis Foggia is fully aware of this, the man who after leaving the VR46 Riders Academy and the Sky team joined up with the Leopard team, but who only had a taste of his future in the first race at Qatar. "I made a small mistake two laps from the end - he says - which partially compromised my race, so a bit of a bitter taste remained, but it was a transitional race for me, while now I'm ready to give my best ".

What sort of squad did you find in the Leopard team? Have you noticed any differences compared to your previous structure?

"I immediately found myself at home, the value of my men cannot be denied despite the familiar environment, there is everything you need to get results. The main difference I noticed is the fact that in Leopard they treat me like a real rider; when I enter the garage, I am a professional rider. I also liked the Honda right away; it has a lot to give me. "

How was your approach leading up to the first race? You had to face up to lots of changes

"It was positive, I arrived at the first race in the right way. Obviously, I have yet to draw all the potential from the bike and from the team as it is all new, we have to get to know each other as it is normal. "

Taking a step back, what did not work for you within the Academy and the Sky team?

"The second season I did not feel good inside the team, I had goals but for some problems I was not able to go fast, and the track confirmed it. With the Academy we did not reach a compromise, just like some others I decided to leave. There was both a technical problem within the team and a human one within the Academy, and these factors led me to take this decision: the Leopard team had contacted me already in 2018 but I still wanted to believe in the project I was in, but things did not go as I hoped so I decided to change. "

Have you remained particularly attached to any Academy rider?

“No, unfortunately not. Obviously, we say hello, and relations have certainly remained positive".

Let us go back to the present, how are you spending these days?

“I am continuing to train to stay on the ball, otherwise we will fall asleep (laughs). I am trying to maintain a routine: in the morning I train, especially in terms of running and cardio to lose a few pounds, in the afternoon I relax, and in the evening, I dedicate myself to video games. Virtual race? I wouldn't say no if they asked me to participate, I'm ready. "

You have also started a noble fundraising activity for your town, Palestrina…

"Exactly, I wanted to try to help my town, taking advantage of my fan club and my visibility: I have gladly put up for a raffle my memorabilia, and I hope we can raise as much funds as possible. If the paddock passes cannot be used, I will host the winners for a day at my house (laughs). "

When do you think we can start again? How do you see a mini championship?

"It's hard to say because the news is different every day, I'm a bit pessimistic about starting again but I hope with all my heart that it can be done. A reduced championship would not be a problem for me, certainly I ought to be more cynical as we have fewer races available to do well ".

Remaining with the future, if you could steal one skill from three MotoGP riders tomorrow, who would they be? And what qualities would you choose?

"From Vale I would steal his mental strength, since he is very strong in this aspect, from Marquez I would steal his riding style and in general what he manages to do on the bike, while from Lorenzo I would steal the ability to be perfect in the one lap and that of being able to power away in the race by setting your own pace ”. 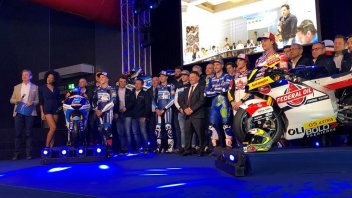 The Californian Yamaha rider took the flag alone ahead of teammate Gagne and Herrin, who beat the Ducati rider in a photo finish. Elias crashed out...
3 days 22 hours ago

Defending champion wins ahead of Scholtz and Gagne. 5th and 7th, Wyman's and Jacobsen's two best Ducatis. Elias stopped by a problem.
4 days 14 hours ago