The perfect guest for today's GPOne Live could only be one man. We’re talking about Loris Capirossi, who blows out 47 candles today (Saturday – Ed.): Capirex spoke frankly to Paolo Scalera, Matteo Aglio and Carlo Pernat with the lightness and sympathy that have always distinguished him, and first of all he showed his most precious heirloom, namely the Desmosedici GP3 which takes pride of place in the living room of his home. "This bike cooked me alive - Loris says admiring it - so much so that once at Mugello I had a third degree burn in my leg".

What do you remember of that first historic Ducati victory in 2003 at Barcelona?

“I have a beautiful memory of that day. Ducati was back in the world championship after many years and in the tests I was the fastest: in the first part of the race we had all preserved the tyres because it was so hot, then Vale went long to avoid me and it was a truly incredible victory ".

That bike was a real laboratory and some tests were not exactly positive, such as the one with the "lowering device".

“Filippo Preziosi always had unusual ideas. I tried that system at Mugello: when you closed the throttle and touched the brake the rear shock closed, the bike lowered and you made incredible braking, but it was really risky because you practically nailed it. Another experiment took place in Jerez in 2005, when I tried an engine that stopped when I closed the throttle, and then started again when I got back on the accelerator. A sort of start and stop that on a MotoGP didn't really work. "

What difference is there between the bike you won with in Barcelona in 2003 and the current MotoGP bikes?

“The main difference is the horsepower, there is about 50 hp more in the current ones. With the bike I have at home I did 350 km/h, but it was difficult to manage, it was much better than a two-stroke but more similar to that bike than a current MotoGP bike".

Which is the bike you liked the most out of all those you have ridden?

“It’s difficult to make comparisons. However, I can say that the current MotoGP bikes really offer incredible adrenaline, overall, they are easy to ride, obviously going slowly. I remember that when I tried the Ducati at Mugello Dovizioso said to me "I bet you that you won't do the bump on the straight at full gas in your first laps", and because I wanted to win the bet, I didn't close the gas even on the first lap. I reached the end of the straight at 360 per hour, and I even managed to stop (laughs). Amongst other things, at the end of last year I bought a new MotoGP bike, and as soon as all this is over, I will go and do some laps with it. "

On a sentimental level, what has remained in your heart?

"The 500 two-stroke I would say, it was difficult to ride but when you found the right set-up it gave you enormous satisfaction".

You rode that bike in the middle of the MotoGP bikes, what was it like?

"It was a bit frustrating, but I had fun: I managed to score two podiums despite being 30 km/h down on the straight to just about everyone."

Many say that current riders wouldn’t be able to race the 500s of the time. What do you think about that?

"It is a myth that we have to dispel because a current champion would be fast even with a 500, maybe it would take a little longer to adapt. Maybe with the current MotoGP bikes all the riders are closer, but the strongest always make the difference. "

About the riders of the present, what can you say about the current MotoGP riders?

“The current level of MotoGP is really high, they are awesome. There is a good human rapport in general, they are all good guys who think through and understand problems. The fact that among them there is an expert rider like Valentino is good for the championship: currently the age limit for racing in MotoGP is 50 years, but for him we could raise it because I don't think he wants to stop (laughs) " .

Past and present - "What great duels with Romboni and Biaggi! Dorna will help all the teams that will need helping"

“I have lived three different eras, let's say, and I have encountered many champions. Above all, I remember Vale, Romboni and Biaggi from my time, then I also had the opportunity to race against Stoner, who was able to win the world championship with the same bike as me. With Romboni and Max I really fought a lot: with the latter the relationship has improved a lot over the years, now we send each other many photos of the past races that he or I won. I would say Fausto Gresini was my best teammate, I learned a lot from him, and he really helped me. It was difficult to be faster than him and when I was, I was almost sorry, he was a really important teammate for me. "

Two other important riders in your history were undoubtedly Lucchi and Harada.

"Absolutely. Due to a contact with Lucchi at Mugello I was unfairly disqualified, and when I got home, I was taken almost by force by a friend to a party where I met my future wife. As far as Harada is concerned, you have been breaking my balls for 22 years with that overtaking move (laughs) but in any case, it means that somehow I have left my mark in history ".

As for the teams, the Pileri team probably deserves a mention (Francesco Pileri intervened by telephone during the Live - Ed).

“The Pileri team was fundamental in my growth, Paolo and Francesco Pileri helped me so much to grow and become a rider. Paolo practically designed the bike with which I won my first title, he was a wizard from this point of view ".

Once you finished experiencing all these adventures you stopped. Did you ever think about SBK?

“When I decided to quit, I was sure to do it, while a few years earlier my manager (Carlo Pernat - Ed.) signed a contract with Ducati for SBK on my behalf without telling me (laughs - Ed). Among other things, this happened on another occasion: in 2002 I broke my wrist in Assen, and while I was recovering, Carlo and I went to Japan to speak to Kawasaki. In the racing department there was a MotoGP bike and they offered us a really high amount of money, but we were also talking to Ducati that I thought was more competitive, while Carlo signed the contract with Kawasaki for me (laughs). "

“He and I are men of other times, for whom a handshake is worth more than a contract. Carlo and I worked together for a long time and he never worked on a percentage; a dinner was enough to agree on everything ".

Anyway, now you have the role of Dorna Safety Advisor. Can you tell us the latest news about a possible championship start?

“It is currently impossible to establish a date, and at this moment the sport is taking a back seat. If we could start in July or August I would be satisfied: if we started in July, we could do more than ten races, otherwise it will be tough. For our part, ware ready to go but we have to wait, obviously we will keep the "hottest" tracks for the colder months ".

Will there be any financial aid also for the Moto2 and Moto3 teams?

“We care about all the teams, so there will also be help for the smaller teams. Many teams are not paying their mechanics right now, so we have to help them in the best possible way. Obviously Dorna is also not cashing in either and the funds are not infinite, so it will help depending on its possibilities. " 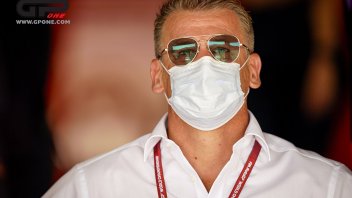