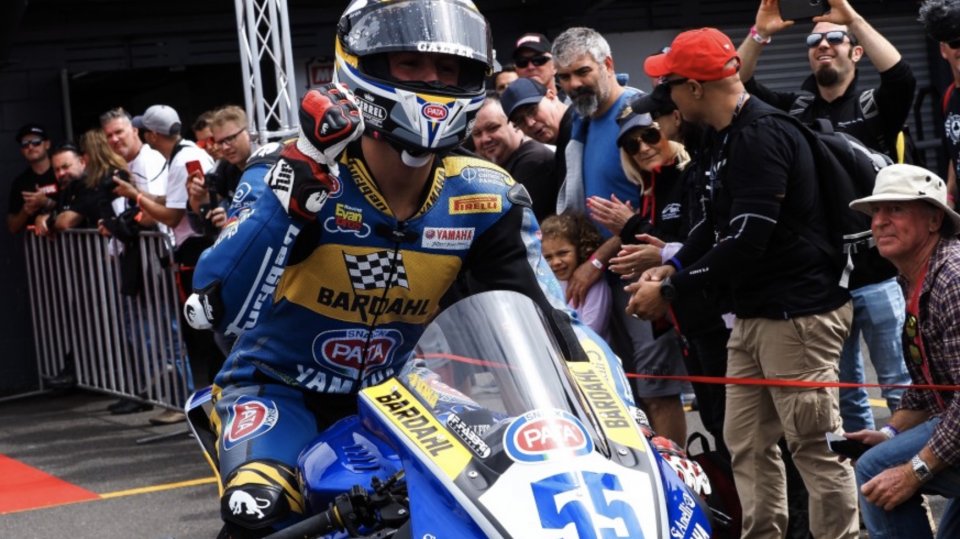 The only World Superbike championship round held so far at Phillip Island certainly provided much food for thought. From the victories of Razgatlioglu, Rea and Lowes to the triple third place of Scott Redding. Another interesting issue, and source of discussion, was the competitiveness of the Honda with Bautista and Haslam riding the new CBR1000 RR-R, which had been under a lot of scrutiny ever since the winter tests.

Supersport, however, was just as interesting and on the Australian track it produced an intense race that saw rookie Andrea Locatelli triumph with the Evan Bros team. In this period of forced break, we caught up with Andrea by phone to gather his overall sensations.

"I am in Selvino with my parents - Locatelli told us immediately - it is a rather bad period made up of long days. Bergamo is very affected by the coronavirus but from home you can see very little, you have to rely on the news. Of course, it makes a certain impression knowing that it all started from here and I feel really sorry for the people of Bergamo”.

When do you think you can start racing again? There are those observers who talk about a rapid-fire championship and those who on the other hand would move SBK to the winter, what do you think?

"I haven’t come to any conclusions yet because I'm not a doctor; of course I think as long as there is this emergency it doesn't make much sense to race because the hospitals are full and we know that ours is a risky sport and unpleasant things can happen."

What is worrying you?

“For example, I could go on track, crash and break my shoulder. I would have to go to hospital, and I wouldn’t know when and if there will be a doctor to fix me up or operate on me, since they are rightly involved in something else. Another important thing is the fact that the motocross tracks and ski slopes are closed because in those situations there is always someone who gets hurt and overloading the hospitals doesn’t seem like a good idea. "

Before returning to the track, however, it seems that there will still be a long time to wait. Dorna has organized the Virtual Race for MotoGP, the first one last week and the second one will be on April 12th (HERE all the information). Did you see it?

“Yes, I saw the virtual race and I loved it. In a moment of difficulty like this it is nice that there are initiatives, but we all prefer real bikes, I think. The eSports have grown a lot and are really cool. "

“I'm not a very technological guy to be honest, I prefer things that are more rustic and traditional. If I have a free afternoon, I go to the garage to do some work or go for a motorcycle ride. I've never had so much time to play the PlayStation because I put it to one side almost immediately when I was a child. "

Going back to real bikes, how was your impact with the SBK paddock? After 7 years of MotoGP it must have been a big change.

"All the non-European races are a bit different, both in the World Championship and in SBK. I really enjoyed the relationship with the fans of the Superbike championship and the communication initiatives such as the Paddock Show and the awards for qualifying and fast lap. I think Superbike has always been the ‘craziest’ world of motorcycling and there is still a real passion for motorcycles ".

What surprised you most about this "crazy" world?

“The private teams really amazed me, really, they make every possible effort and are driven by people with real passion. Evan Bros, my team this year, is an official team but in any case, everything is done at home with a lot of dedication. This winter I saw things I never thought were possible. There were regulation changes and the team worked really well and supported me as I came from a totally different bike. "

And what did the change of motorbike and championship entail?

“The two bikes are completely different. The R6 you can buy at the dealership, then do some tweaks here and there, add something and you can go to the track, the Moto2 bike instead is a prototype where you can change many more variables. The weight, the power delivery, the electronics and the seating also change a lot. It must be said, however, that they are always motorcycles, there is a brake and a throttle, and the speeds are very similar. "

After the victory in Phillip Island where you absolutely dominated the weekend, do you feel you are the favourite for the championship?

“It is difficult to say who is the championship favourite; for sure, I am one of the candidates and I will be able to win some races. Phillip Island helped me a lot because it's a track that I like. But we will also go to some tracks that I don't know, like Donington. I know I'm fast, but I still have to improve in my feeling with the R6. Then for sure there are other candidates, in Australia during the qualifying session I was surprised by the level of some riders, it won’t be easy to stay ahead ".