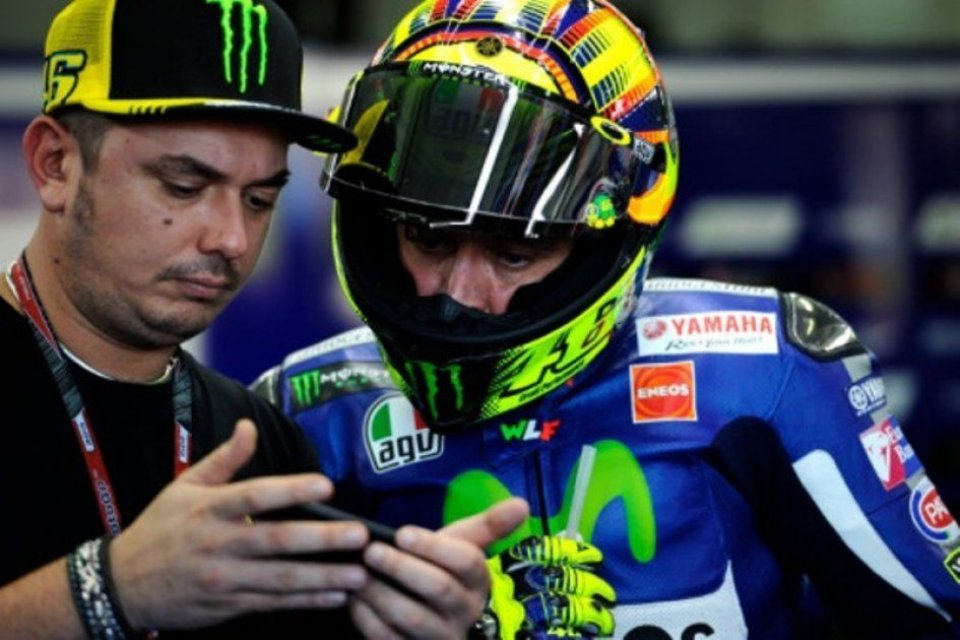 Valentino Rossi, the VR46 Academy, the past and the future. There are many topics that can be explored with Alessio ‘Uccio’ Salucci, who has always been Rossi's right-hand man and guest of today's GPOne Facebook Live broadcast (HERE the video), so there was no lack of food for thought and conversation. “Personally, the current situation worries me - Salucci began - and first of all I would like it to end. I'd like to start the life I had before as soon as possible, but I don't deny that at the moment I’ve pushed it into the background ".

Did you keep in touch with the guys from the VR46 Riders Academy?

"We talk to the guys every day to keep them ‘alive’: they were very excited while now they are a little worried, like everyone else and they are all like caged lions, let's say. The most agitated is Migno, who has been disappointed since the first race and has a great desire to make amends for it”.

“I hear from Vale a couple of times a day. He is lucky to have a gym at home, so he trains regularly; in this respect he feels less of the difference than before. "

It’s impossible for me not to ask. What are Rossi's plans for 2021 at the moment?

“It’s hard to say now because the situation is particular. The idea was to do a few races and see what the situation is, and the same is true now: if Valentino feels competitive he will continue, otherwise he will do something else; he is not someone who loves to lounge around, so he will surely be busy in another activity if he stops. He is a 40-year-old with the desire and the spirit of a 28-year-old, while with this quarantine I now feel like a 50-year-old ".

If it continues, might he change brands? Maybe trying an adventure in Suzuki or Aprilia

"Changing bikes at the moment would be difficult, so Valentino's future is in Yamaha."

So that means the Petronas team. Who would currently have what it takes to be his teammate?

“You should ask Jarvis (laughs). I would like to see him alongside Morbidelli, but it is only a personal opinion ".

Back in the old days - "Welkom the best race, Stoner the strongest opponent"

Let's take a small leap back into the past. What is Vale's victory that you remember most fondly?

"I have Welkom 2004 in my heart, not only for the victory but for everything that was behind it. His arrival in Yamaha, Honda's ban on testing until December 31, 2003 and the many doubts about the switch, all while Biaggi was lapping well and going fast. The first test went well, a great group of people was created immediately, and we achieved that historic victory ".

Which opponents were the most impressive?

"Biaggi was the most fun as opponent, there was respect despite some disagreements on the track. I remember the years from '99 to 2004 with pleasure: there were many fast Italians and with the Academy we take a bit of inspiration from that period. His strongest opponent? I would say Stoner: he was a crystalline talent difficult to decipher, capable of getting his time down by a second from Saturday to Sunday. It was not easy to beat him; in fact, he too beat us several times”.

The hardest period was certainly the one in Ducati. What went wrong?

“Something went wrong, and I can't say exactly what. The bike was difficult, it had a unique character and the spark never ignited. Every time Valentino tried to push a little harder, he crashed, and in the long run the situation was no longer sustainable. When Jeremy (Burgess – Ed.) saw the bike for the first time he was sceptical, and after a few races he had lost hope. We all tried our best, but it was not possible to do more ".

Let's come back to the present. Are there ever any disagreements between you and Valentino?

"There are some small clashes at times, but on the other hand, my role is also to tell him what I don't think is good. They are normal things; however, there have been heated discussions but after ten minutes things have always settled down, especially on his part because I am more of a resentful type".

However, a lot of people say that in some way you invented a job for yourself…

"Not really because before Valentino also others like Biaggi had a figure like me alongside them, but the image that I was the first to do such a thing has remained in time. Now all the riders have a friend at their side who supports and helps them, and hearing these guys called ‘so-and-so’s Uccio’ makes me smile ".

Riders Academy - "For now no team in MotoGP, Marini could be ready to make the jump"

In addition to this role, you must look after the Academy, which at the moment has Morbidelli and Bagnaia as its crown jewels. How do you see their future?

“I hope Franco remains with his current team, which is very happy with him because he is a strong rider and is a nice guy. I hope Bagnaia can deserve a place in the factory team on the track: last year he encountered all the difficulties of a championship like MotoGP, but he learned a lot and changed his attitude, proving to be very fast ".

Will we ever see an Academy team in MotoGP?

“Our mission is to prepare the kids for MotoGP, so we'll stop at Moto2 for now, but never say never in the future. Maybe the fact that Valentino will have more time when he stops could change things. "

Could Marini be one rider who is ready to make the jump into the premier class?

"We would like that to happen, Luca is probably the best prepared rider for MotoGP at the moment. In Qatar he missed out on a podium just because of one problem ".

In Moto3 instead how do you see Vietti and Migno?

“Celestino is very fast, unfortunately the first race went badly but it wasn’t his fault. The bike was fast, and he was ready for the fight; I think he would have been on the podium: in general, there are many riders with more experience than him, so it won't be easy, the important thing is to be protagonists. We believe a lot in Migno and in fact we wanted him again with us. I am convinced that if he used his head a bit more, he could aim for the top, maybe even to Moto2 ".

How do you view the fact that Baldassarri and Bulega left instead?

Do you have any new entries in mind? Is there any plan to open the doors also to foreign riders?

“We have realized how difficult it is to manage eleven riders, so for now we are staying with what we have. Fortunately, we receive many requests, even from foreign riders, but for the moment the goal is to help Italian riders, which is what we are doing ".

Let's move on to four wheels, and the victory you achieved in Dubai.

"It was a fantastic emotion to race with Luca and Valentino, I did my homework and it went very well. I have always been a car enthusiast and have had some satisfaction with it in the past: I like to race on the track more than in rallies, I would like to do a few races a year. "

Many fans ask if a Rossi museum will ever be created and if they will ever see the ranch. What’s your answer?

"We would have already liked to open the Ranch to the public but there have been bureaucratic problems, given that the roads leading to the ranch are not very good yet: we are working to improve this aspect and to be able to bring the fans to the ranch, since showing them the riders  training there is really nice. The same goes for the museum, we have found a couple of locations and we are working step by step ".