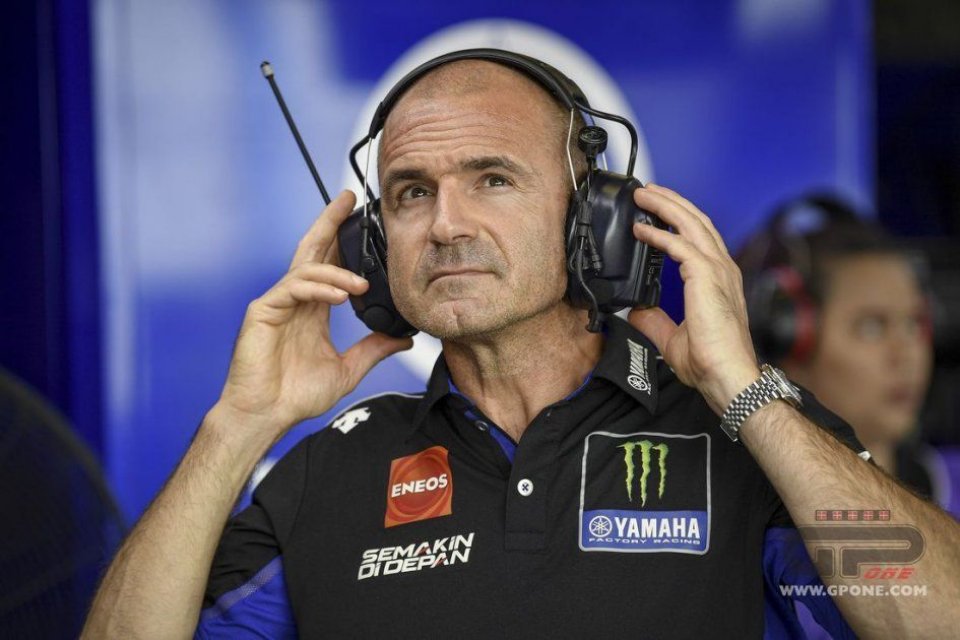 It was the revelation of the winter tests. We are obviously talking about the Yamaha, which has shown that it has switched into a higher gear, to the point of obscuring the competition. An aspect that has certainly not escaped Massimo Meregalli, who like many of his colleagues has to console himself with the Losail test as the last image of a season that has not yet got underway, and it is still not sure when it will start.

The Yamaha team manager is taking stock of what was done during the winter, but at the same time he is also looking to the future, despite a big question mark over 2020. In addition to the calendar there is no lack of curiosity about who will go well ​​on track, with Rossi who is faced with a tough decision.

"For sure, this is not a simple situation - Meregalli began - obviously priority goes to everyone’s health and to all those people working in hospitals and who are struggling for their lives. We are at home, in close contact with all team members and also with our riders. In these days I’ve spoken to Maverick, who said he had almost completely recovered from the injury and was satisfied. "

Maio, many people are now wondering when the season will start. What’s your take on this?

“At the moment I think it is impossible to plan or decide a date, given that the situation is constantly changing. Dorna, as you already know, is doing everything to safeguard the world championship and at the same time to find a solution to hold the races. I personally think that before July it is virtually impossible to start”.

Dorna's plan is to hold 19 races. Do you think it's possible?

“In my opinion it won’t be easy, also because we don't even know when we will start. I am of the opinion that holding 12-13 races can be a fair number, perhaps trying to do a few more. But I see holding 19 races as complicated."

"If we had raced in Qatar, Vinales would have won"

The fact that the world championship hasn’t started for Yamaha is a bit of a bummer after what was seen in the tests.

“We are obviously sorry, as are all the fans. In the tests we managed to do a great job, both in Sepang and in Losail. Maverick was very fast, he found a lot of confidence in race pace with the bike and the tyres, as well as over one lap. He was very confident and the same was true for Quartararo. "

Who would have won in they had raced at Losail?

"From what we saw in the tests I would say Vinales".

“Vale did not show what his true potential was, he preferred to keep some margin. His indications were certainly positive and at the end of the test he was satisfied. Unfortunately, he again suffered deterioration of the rear tyre, but this was an aspect that only emerged in Qatar, given that in Malaysia and Spain the sensations were different. Obviously, we have to understand where the problem comes from, despite the fact that his style is different from that of Maverick and Fabio and consequently he stresses the tyre more. "

We have repeatedly said that 2020 will be a crossroads for Rossi. How long will Valentino need to decide what to do next year?

"For a rider of his calibre, I think that two or three races are sufficient. Vale is a very intelligent person who immediately understands his level. "

“Certainly, both will have to take a step to meet half-way from this point of view. I am convinced that Yamaha will work to put Vale in the best situation and he will do the same, perhaps partly distorting his riding style, which he has already done in the past, showing that it is not a problem ".

Maio, a blunt question for you: how much has Yamaha changed in the past year?

"I think a great deal of work has been done, especially at the reorganization level, in particular regarding interfacing with the company and the respective development programs. For three years, for example, we had to deal with a certain particular situation, while last year there was a great change of gear. The new bike arrived in Brno, following some of the updates in the tests until we had the final version of the bike between Spain and Malaysia. I believe that the plan carried out in the company has paid off and now the results are clear, also because we have a solid base to work on. This I consider a key aspect, since on all circuits we have never turned the bike upside down and this also applies to the M1 satellite bikes".

One of the biggest changes is the return of Jorge Lorenzo…

"Exactly, I think Yamaha's problem was not having an internal test rider of the calibre of Lorenzo, who is a fast rider. In the past, perhaps the riders used to rely on some indications and consequently they discarded some things straight away, while Lorenzo has the ability to take the bike to the limit and ride it naturally. I remember the Sepang test, I went to watch him alongside the track, and at the end of the test he told me that he had found what used to be his bike ".

How much will he be able to help Valentino?

"Since Jorge has returned to Yamaha, I have seen him changed a lot as a person and I am convinced that he will make available all the experience he accumulated in recent years with Honda and Ducati, indicating any strengths of the other bikes. I believe that between Lorenzo and Vale there has always been a great respect, despite the rivalry between teammates that pushed both to give their best. With Lorenzo, we only just managed to get him to try the bike at Sepang and on that occasion some positive and useful opinions emerged for the team, given that the M1 is Jorge's bike".

Speaking to Michele Pirro during the week, he said that the improvement of the Yamaha depends exclusively on the tyres. Is this so?

"I believe that the Michelins enhance the characteristics of the M1, but at the same time I am of the opinion that the bike has a solid base. I think it's the whole package that helps to produce certain performances on the track. Certainly, with these Michelins the bike is competitive, but it must be said that this tyre design has been approved by the majority of the teams. "