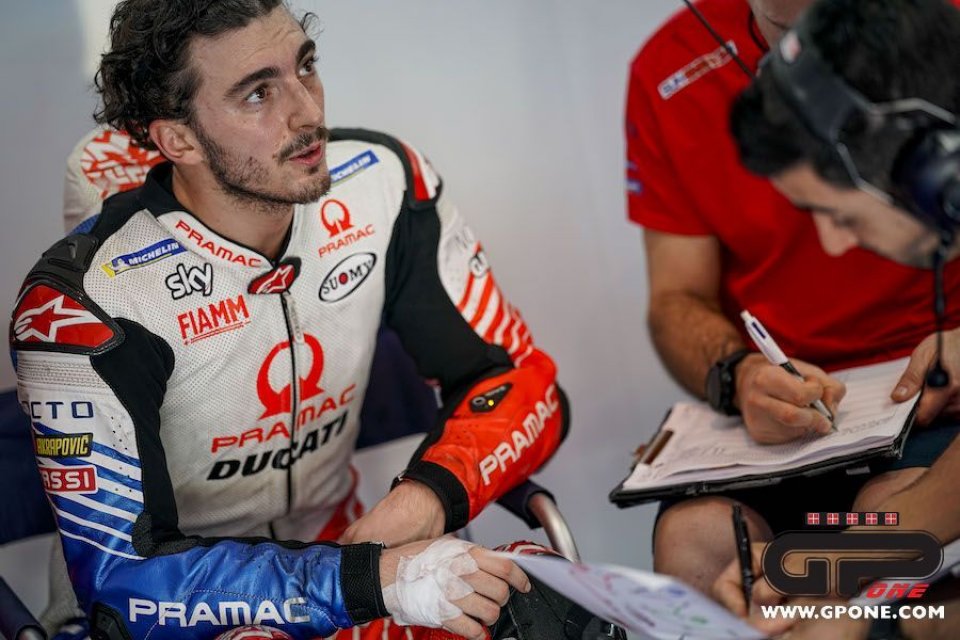 Like all MotoGP riders, Pecco Bagnaia is also in the pit-box because of the stop imposed by the Coronavirus emergency. The Ducati Pramac rider was interviewed by Sky (here is the full interview) and said he was very focused on what could be a decisive year for his future in the top-class.

"I started out a bit more cautious during the tests, so I could find a feeling with the bike and, now, with the Ducati 2020 and the team around me, I can have everything I need to achieve the results that we're looking for. My goal is to get to the official Ducati in 2021. To do so, I have to deserve it."

A clear message to everyone and to the upper echelons at Ducati who, through Paolo Ciabatti, have strongly re-launched Pecco as candidate for the official 2021 team.

"I hope so," Bagnaia said, referring to Ciabatti. "In my opinion, they have all the reason to. Last year was tough, with too many falls that are not like me. Just think that, in the previous two years, I fell 4 and 6 times."

However, Bagnaia's 2019 was not objectively that bad. Perhaps Quartararo the phenomenon overshadowed him with his incredible results.

"Fabio has had a season beyond all expectations, including Yamaha's. There will always be negative comments, but they're the least important thing. It's useless to waste time on negative comments, especially if they come from those who are not even in the sector. You'd just go crazy. If the comments come from Ciabatti, Tardozzi, or someone from my team or my family, then you have to grow and learn but, for example, social networks are full of keyboard warriors."

Meanwhile, the market has already moved with Yamaha, which has secured Vinales and Quartararo, and Honda which has confirmed Marquez. Pecco might instead receive offers besides Ducati, like from Iwata.

"It would be interesting to ride a Yamaha, but that's not what I want. The offers from other teams are nice, but I immediately married the Ducati project. I wanted Ducati, and it wouldn't seem right for anyone to give up this challenge. They really invested in me. I believed in them, and it's something that we must continue together."

On the market front, there's also the issue of Valentino Rossi - with whom Bagnaia has a relationship even off the track - and his withdrawal. In fact, a virtual Playstation tournament will be taking place with Pecco and Valentino as rivals.

"We're almost all in the tournament: Sanchini, Valentino, Migno, Fuligni, Pasini, Roberto Brivio, and the competition is great. I won the last three challenges, and I'm going to get Pasini. I think a paddock without Vale will be strange. I've never seen one, because he's always been there, especially from the second to the third year. We've become friends a bit more. When I talk to him now he seems psyched. He was also very competitive in the Qatar tests. I saw he was fit. Last year went worse. This year he was ahead, but we'll see what will happen when we start."

Bagnaia's season has been repeatedly compared to Lorenzo's first with Ducati, both with regard to results and to the very similar riding styles both riders have. So an important improvement is expected in this 2020.

"I've always raced with a certain riding style, preferring to follow corners, and this way of riding doesn't pay with Ducati. We're trying to reconcile my strengths with those of Ducati, which are distance when braking and traction exiting corners. When Lorenzo managed to understand this, he took huge steps forward and won two races. Now I have to try to be more constant with the tires. I think he's succeeding also in the simulation, race by race. I only hope that when we start again, I'll start from here. Actually, I'm sure of it, because I hardly forget the things I learn. Last year I saw Lorenzo's data in Ducati especially in braking, how he evolved since, in the beginning, he was braking in a Yamaha style, stopping less, to then reach a Ducati style when braking. Lately, I've been looking at Dovizioso's, Petrucci's, and Miller's data."