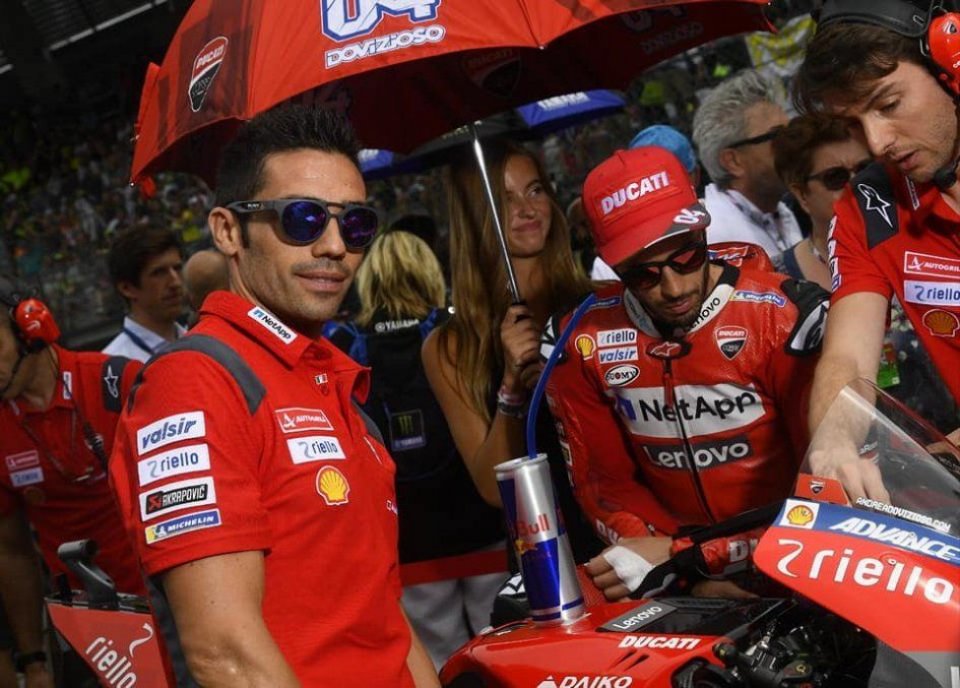 He might have been one of the first to be warned about the situation, probably because he spent a lot of his time talking to Paola, his girlfriend, who works in the hospital. Michele Pirro, like many of us, had not realized what was happening and in the end his life has also changed in the last few weeks. Bikes are now a distant mirage, since his days are busy between working out in the gym and at the same time being a bit of a ‘househusband’.

It’s unusual for someone like Pirro, who is used to speeding at over 300 km/h on the track and being responsible for the development of the Ducati. Yet, like everyone else, the test rider from the province of Apulia also hopes for a return to action soon, despite the fact that there is a big question mark on the horizon.

“I think that at this moment the most important thing is to survive – declared Michele – for all of us it is a strange and unusual situation. You find yourself shut up at home with your habits turned upside down, spending time in a completely different way, but what matters is your health. That always comes first and foremost, and I talk about all this with my fiancée Paola".

She works in the hospital, right?

"Right. She was one of the first people to warn me about what was going on. At first, I had underestimated it, but then we all realized the danger. Sometimes she tells me about some complicated situations in the hospital, which we have no idea about, and it’s not easy. It’s much better to talk about bikes, even if we don't have much to say."

Michele, how much has your life changed in these weeks?

“You can't go on a motorbike, let alone on a bicycle, and so you pass your time training at home. For example, I have a small gym and I try to keep fit. Then I do some housework, clean, put things in order. Just think that this afternoon I spoke to Dovi and he was also being a housewife (smiles)”.

“Us riders are wondering the same thing as well, but right now thinking about racing and when it will resume just wears out your mind. My dream is at the end of May, it would be great to meet up at Mugello, but nobody has an answer, because everything is changing all the time”.

Michele Pirro: "The riders would be ready to race all 20 Grands Prix"

Dorna is determined to hold all the rounds, at the cost of racing also in December. What are your thoughts on this? Is this OK or is a 13-race World Championship better?

“In my opinion, I am convinced that the riders would be willing to do all twenty races, even at the cost of ending at Christmas and having a reduced world championship. I think that holding three races in one month is not a problem, because we would be ready anyway. It will be tough, given that you might have to go quickly from one time zone to another, but the riders take the view that they are determined to face this tour de force."

Michele Pirro: "Dovizioso would have won at Losail, with Petrucci on the podium"

The last image we have of MotoGP is that of Losail, in the tests. I’ll put you on the spot: if they had held the race, who would have won?

"Dovizioso. And Petrucci would also have got on the podium”.

Yet the Ducati didn’t seem that competitive…

“Every year we never seem competitive in the tests, but in the last two seasons, however, Dovi has always finished ahead of everyone else at Losail. In the last few years, we always saw Vinales very strong in qualifying, then in the race he found himself struggling. I am convinced that if the race had gone ahead, the Ducati would have won".

Michele Pirro: "The Yamaha has improved ... helped by the tyres"

Right now, it seems that the Yamaha is the bike that has improved the most. Is that really the case?

“Has the bike improved or is it the tyres? Now I'll be the journalist. Answer the question".

Michele Pirro: "The only thing that makes you gain half a second is the tyres"

“Then I'll try and explain it. There is no chassis, aerodynamics or any device, technically, that can help you gain half a second on the track. The only thing that can change the situation, giving you that half-a-second or seven-tenths is the tyres. Period. I say this because we have reached a level where you can improve one tenth and sometimes the need to improve leads you to take the wrong direction. Just look at Honda with Marquez in the last test. "

Michele Pirro: "Marquez and Honda have struggled, but they will be there fighting for the win"

“These are things that can happen, because in the development of the bike there are a lot of different aspects that have to fit together, and it is not as obvious as it seems. Certainly, Marc and Honda struggled, but I am sure they will be there fighting for the win. In addition, in amidst all the bad luck of this moment, Marquez will be able to recover his fitness. That’s all he needed… (jokes)"

Michele Pirro: "The holeshot device? It’s always the same: first they criticize us and then they copy us"

Michele, in the tests you surprised us with the holeshot device.

"Yeah, everyone was starting to get bored, so we rekindled a bit of interest (smiles). For sure everyone will copy it now, that’s how it usually works. First, everyone has a go at us, then they take inspiration from us. I believe that Italian brilliance has hit the bullseye once again and in the end I'm happy, because Ducati has always worked to make the bike competitive for every rider, not just for one".

Michele Pirro: "Don’t throw Petrucci under a bus: the season hasn't started yet"

A couple more things to ask you. What do you think of Petrucci's contract renewal? Many observers are convinced that his fate is already sealed.

"I don't understand one thing: the season has not yet started, and you guys have already thrown Danilo under a bus. Let's wait and see how he goes, shall we? Last year he was one of the few riders to beat Marquez. He started in difficulty but then managed to win at Mugello".

One last comment: was it a surprise for you that Lorenzo returned to Yamaha?

“I see Jorge is having a lot of fun and I'm happy for him. He’s relaxed, carefree. We have heard that he will be racing in Barcelona and perhaps at that moment he will find himself in the same situation as me. I can imagine he’ll be fast, but the hardest thing will be to keep the pace for the duration of the race. That will be a fundamental aspect, seeing as it’s one thing to be fast for one lap, another for twenty. "