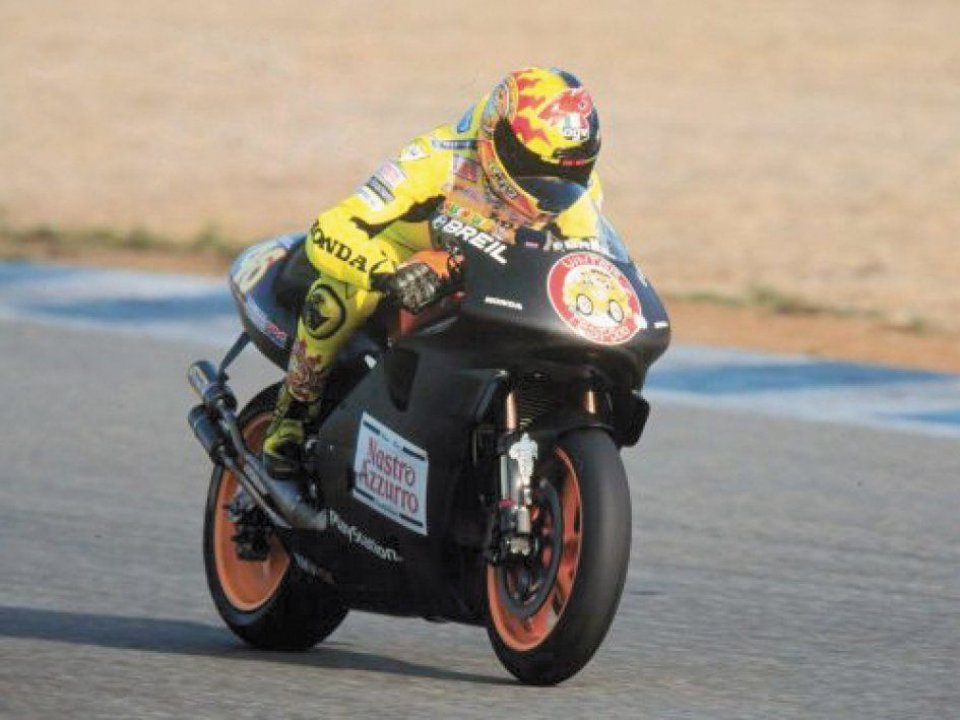 A good 20 years have gone by since Valentino Rossi took his first steps in the premier class of the world championship, which at the time featured two-stroke engines and was represented by the legendary 500 GP. In a video posted on motogp.com, Valentino recalled many details of that debut, which took place after he had been crowned 250cc world champion and had reached an agreement with Honda to make his 500cc debut.

It was a special debut, which came about without him being able to wear the leathers prepared for the occasion together with his helmet, replaced at the last second as he said here.

"It was a special moment of my career - Rossi recalled in the video – because I arrived from 250 and in 2000, I had the chance to ride the 500 two-stroke, which was a sort of mythologic bike for all the riders. I wanted to be sure to win the championship before jumping in 500 and I had the offer of Honda, which was a great offer for me because at that moment it was the best bike. But I wanted to be really sure to be world champion in 250 and after that moment we moved to the 500".

Rossi inherited a team of technicians of the highest level, thanks also to the bad luck that hit Mick Doohan during 1999.

"I take all the team from Mick Doohan, some guys are still with me now. In 1999 Mick had an accident in Jerez so he finished his career. This was very good for me because with Jeremy and the other guys I found myself in a team that had a lot of experience. The first time I tried the Honda 500 was in Jerez, it seems to me November. It was a great emotion, because the bike was really strong. We tried the bike, we had a very good lap time, faster than the race, a very good test."

The memory of his race debut, which took place in Welkom in South Africa, is also very clear, but it was marred by a crash when he was going well.

"I started quite bad and after I had a group of like five or six bikes in front. I recovered, I did the fastest lap and when I arrived at this group, I crashed. It was a shame because in the first three races I lose the championship with Kenny Roberts Jr, because he did a lot of points and I did nothing because I crashed also in the second race.".

It was an early part of the year that unfortunately eliminated Rossi from the title fight in his debut season.

"It was a shame because at the end of the season I was not so far to win at my debut. But it was OK like this, I enjoy a lot and in my first season I was able to win my first race in the 500 and also the second race in Rio on the dry. It was a great emotion."