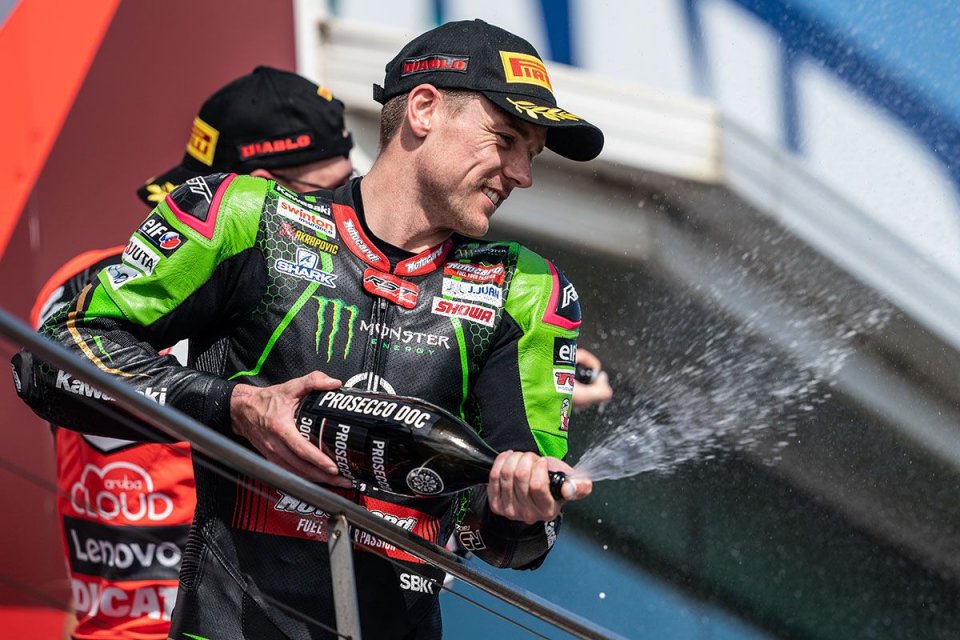 Alex Lowes could never have imagined leaving Phillip Island as championship leader, on his debut on the Kawasaki. Rea's teammate managed to put together an almost perfect and absolutely concrete race weekend, which allowed him to score two podiums and the win in Race 2. His total of 51 points powered him to the top of the points table in first place ahead of Scott Redding.

A truly impressive result for a rider who had not really impressed on the Kawasaki during the long winter testing season, often giving the impression of having too many difficulties in adapting to the change he took on by moving from the Yamaha R1 to the championship-winning Ninja machine. Phillip Island has produced a different verdict though and now it's natural for Alex to start to think big.

"I feel great, it was a great race weekend with this new team for me - said Lowes - the race was complex because the temperature went up a lot and the grip was not the best. But I had a lot of fun, I duelled with everyone and at the beginning it was difficult to find a rhythm. I made contact with Toprak, then Michael. But it was a great fight, because I managed to stay focused and find my pace, continuing it until the end of the race. I am very happy to have won my first race with Kawasaki here and now I can't wait to celebrate and then get on the plane, go home and get ready for the next race in Qatar ".

Do you feel ready to challenge your teammate in the battle for the world championship?

"I have to stay calm. I’ve only won my second race in SBK, while Jonathan has won five titles. My plan remains to race and learn from him. I want to understand what my pace will be on more ordinary tracks, but the team are fantastic, and they are helping me a lot. I enjoy riding this bike and when a rider has fun, he is usually also very fast in the race. I simply try to always give my best and today I did it, despite the difficult conditions. I simply tried to bring home the best possible race for me"

During the tests you seemed to be in difficulty. What has changed here?

"I don't know how I managed to have these excellent sensations on the Kawasaki in such a short time, because in tests I didn't really have that much confidence on the bike. Maybe during the race weekend things go differently. Jonathan is used to going out on the track and fighting for the win in every single race weekend and this also leads the team to work very hard because everyone knows that this bike is able to win. I think it is only my duty to adapt to the bike, because it is obvious that the motorcycle works well."

How different is this Kawasaki compared to the Yamaha you had before?

"I would say that our bike is easy and fun to use in the race if compared to the one I had in the past. It is much more fun to use when you have to risk overtaking in the race compared to what the Yamaha was, which was really the opposite. That needed a lot more confidence."

Do you think that what you saw here in Phillip Island will be a bit of a trend of the championship?

"In my opinion, when we race in Qatar and also in the European rounds, the races will be a little different. Here the tyres go off a lot with the temperature, there are fast corners and you have to manage everything in a particular way, using your head a lot. I’ve still got a lot to learn, but in my opinion the races will be different".