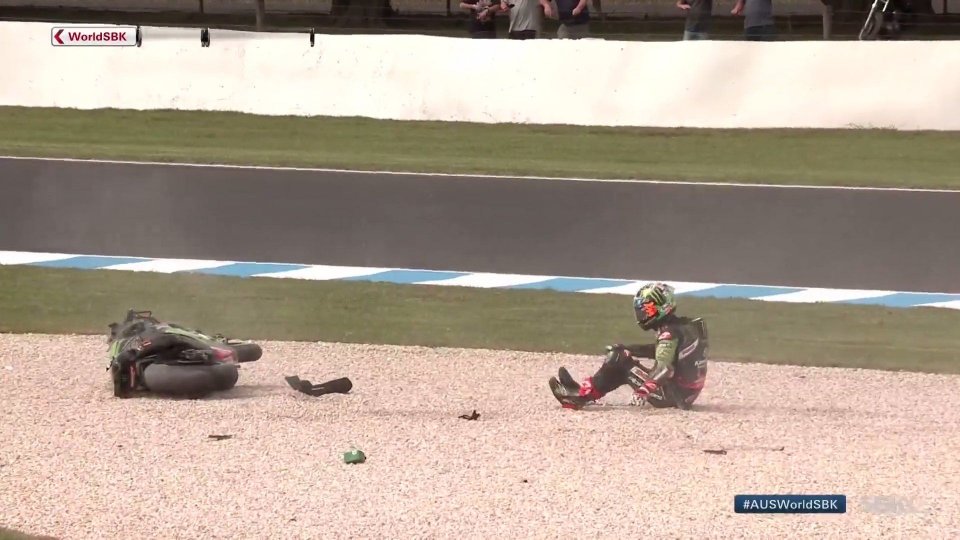 His race lasted less than five minutes. A disappointing start to the season for Johnny Rea, who at Phillip Island had to retire from Race 1. First there was the contact with Sykes, then a fall in an attempt to overtake Rinaldi and attempt a comeback. The Northern Irishman’s race ended there, with his second crash due to his own fault in the last six years.

The contact with Tom and the subsequent incident were the hot topics of Phillip Island on Saturday.

“I have no idea what happened. I was hit by him on the rear, I was in front. Maybe I didn't do my best to stay on the bike and avoid what happened. What can I say, too bad! Despite that mistake, I tried to bring home as many points as possible, but I couldn't. "

What happened when you passed Rinaldi?

“When I was trying to pass Michael, I started losing the front on the bumps I lost front and ended up on the ground. Too bad, because I felt really good with the bike and I could have brought home some points. The most important thing is that I wasn’t injured. At this point it is better to think about tomorrow's race, even if I have no data to rely on. "

What do you think of the contact with Tom?

Johnny, it's a bit weird for you to start with DNF.

"I’m obviously disappointed for the retirement, but this is a long season and we are only at the beginning. I am sure that it will still be an interesting 2020, in which we will have to think race by race, without thinking too much forward ".

When you rejoined the race, however, you showed that you had a great pace. You were about three seconds faster than the other riders.

“Obviously I didn't think about doing a conservative race. The only thing that interested me was to make up the gap to the riders ahead of me. I tried, but I ended up on the ground. Without that inconvenience I would have been able to get into the group where Davies was, around eighth place, but there is no point in talking about that. "

Did you see the race?

“I was at the medical centre to have some checks. What I noticed was that in the race I was able to be four seconds faster than in 2019, but in the end, it doesn't count for anything. What counts is not getting hurt and being ready for Sunday”.