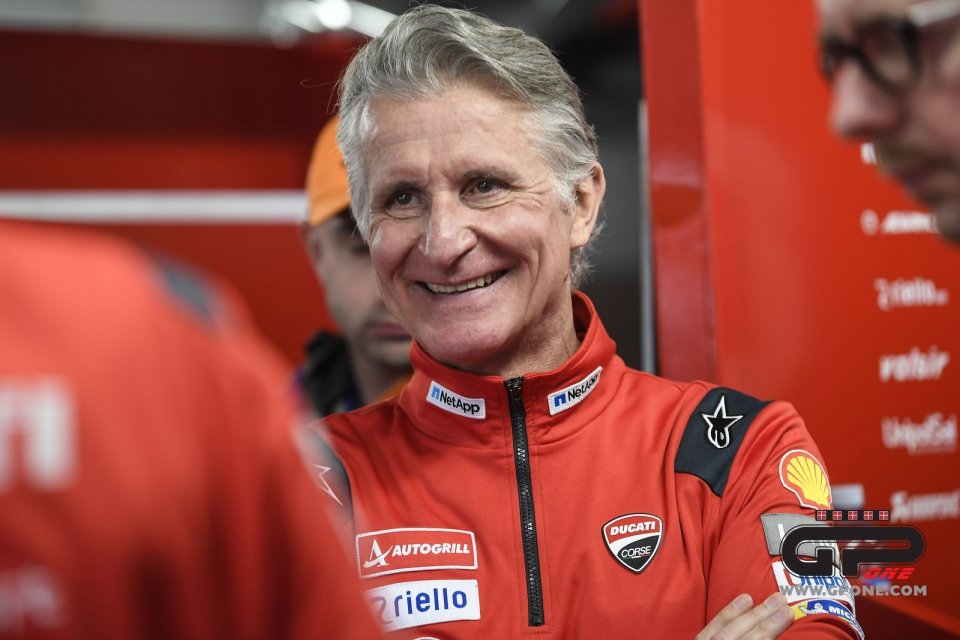 It’s too early to speak, of course, but it seems that Ducati at Phillip Island have started off on the right foot. Something that cannot fail to please Borgo Panigale after the disappointment of 2019.

Confirmation, if ever it was needed, of the importance of having the right riders, as well as the right bike. Scott Redding was a major signing after Alvaro Bautista's decision to switch to Honda. A topic that inevitably leads us to talk about the Superbike market, because while it is true that in MotoGP it is virtually over, with Ducati left a bit with the short end of the stick, it is just as true that in the production-based championship the Panigale V4 is certainly the most coveted bike of all.

Ciabatti: "Rea costs one million Euros, a budget that is off the market in Superbike"

“Starting off on the right foot, as Scott Redding did in the first tests is always important, but for the moment we are a bit stuck on the market - Paolo Ciabatti confirmed to us - There has however been a lot of fake news. It’s difficult to understand given the age of the riders involved. Rea is the Marquez of Superbike, and in the past, we also spoke to each other, it is our job, but today the operation wouldn’t make any sense, even if we were to think about putting him in place of Chaz Davies to make up the squad in 2021. Age no longer acts in his favour and then there is one small detail: he is delighted to be a Kawasaki rider and to earn more than one million Euros a year. A budget that only Kawasaki has because they only do Superbike. This is figure that is totally off-market, because in Superbike the best retainers are between 400 and 500,000 Euros. He makes the difference, of course, but would Kawasaki win without him? Probably not, but the fact remains that nobody has that kind of budget. "

Ciabatti: "A Kawasaki wildcard in MotoGP? Who would benefit? If you want to play the game, then do it with the same rules and for five years"

Still on the subject of Kawasaki: were you surprised by their request to have Rea do some wildcards in MotoGP?

“Honestly yes, it surprised me. Irrespective of the speed that some Superbikes have on circuits they share with MotoGP, there is the variable of tyres and race pace, but who would benefit? Dorna gave the answer I expected. If you want to play the game in MotoGP, you play with everyone's rules, because just appearing with the aim of demonstrating who knows what is not good for anyone. Ezpeleta was intelligent. Why allow Kawasaki something that, if it goes well and beyond expectations, would demonstrate that with a production bike they perform just as well as a MotoGP bike? If you want to race in MotoGP, sign a five-year contract with all the constraints and advantages. "

Ciabatti: "Honda's return to SBK means that the world’s largest manufacturer is interested in the championship: it’s positive "

In this sense, therefore, what do you think of Honda's entrance, or rather return, to Superbike?

“As you know, Superbike is very important to us for many reasons and having seen Honda develop a new super sports bike, returning with an official team and an internal structure, with a lot of Japanese technicians, we are pleased. It means that the championship, irrespective of the problems it has gone through, interests the largest manufacturer in the world, which abandoned the championship in 2002 when it shut down the Castrol Honda operation. It’s true they were there with ten Kate, but as everyone knows, that was a Honda Europe project. "

"It is an extremely competitive bike and will initially be with Leon Haslam. Alvaro Bautista will take a bit longer to understand it because both in MotoGP and in SBK he has always raced different bikes. However, the championship looks as if it will be very close”.

Ciabatti: "Honda in MotoGP are in difficulty but they have incredible firepower: they will be competitive"

And in the ‘first division’, how will things go instead?

"Let's say in the 'Premier League', then. I saw that Yamaha and Suzuki were in good shape after the Sepang and Losail tests. They made great bikes and their riders benefited from the new Michelin casing construction that suits them best. Ducati are also in good shape, though. In Losail we had an excellent pace, we’re only a couple of tenths down on Viñales who seems to be the rider most on the ball. Honda, however, are apparently in difficulty: if you take a 2019 bike - Nakagami’s - and paint it black to give it to Marquez to test, it means that there is some difficulty. And then Marc Marquez is obviously not in shape yet. However, Honda's firepower is exceptional, and they will be protagonists, as always. Even in Qatar, albeit not 100% ".

“The Formula 1 is a bigger organization. Everything happens faster, but the riders have the same attitude. Alonso returned here because he’s hungry...
20 hours 12 min ago