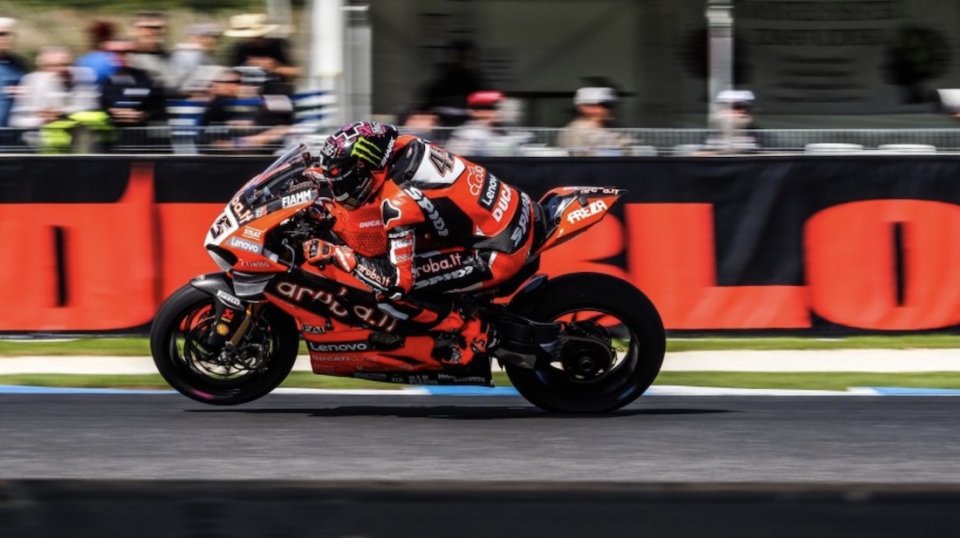 Excellent Superbike debut for Scott Redding who, on the first day of the free practice sessions of the Australian round, had a great double-win, bringing home two first places for Ducati. The Borgo Panigale team must defend Alvaro Bautista's victories from last year and, at the moment, Scott Redding seems to be the number one man to succeed in the undertaking. The British rider was a bit in the shadows during the tests, starting from Jerez, where he had always been among the first, but without shining.

“The important thing was to arrive prepared today. I took everything I could during the tests, as if they were real shakedowns, trying to understand the bike and the tires, and doing race simulations. I worked on that even today, but then I mounted a softer tire to find the time."

What's the forecast for tomorrow? Does this V4 still have a margin?

"I think I'll be able to improve further tomorrow. During both fast laps, I was always alone. I didn't have anyone to follow, and we know that it can help a lot on this track. However, it was crazy today to see how the front tires work.”

In an interview with our Paolo Scalera (which you can find HERE), Dorna's CEO, Carmelo Ezpeleta, said that the Superbike is like the second division of motorcycles. You raced in the World Championship for many years, and you're now in the SBK. What do you think?

“I can't blame him. The MotoGP is the top, while the Superbike is the next best thing after the MotoGP. The bikes and the quality of the riders are different, but sometimes the SBK is just as fast as the MotoGP, and it would be interesting to see these bikes with carbon brakes. Maybe in the future we'll see collaborations between the two classes."

Going back to the facts on the track, taking a look at the ranking, and focusing on your advantage on the second classified, Razgatlioglu, his time is +0.418. Not bad for a rookie. Do you feel ready for a win with your debut in the Superbike?

“I have to work more, one step at a time. I still have to understand how this category works, which is a bit strange frankly. It would be nice to get on the podium or win one of the races this weekend . I'm sure I can do it, and I'm sure that the best thing I can do is continue to prepare the bike as best as I can. I have no experience, so I don't know if I'll be able to express myself better in three races."

Today you brought the work done in the tests with the Panigale V4 to the track, what's missing?

“All we have to do is confirm that everything we tried in the tests works well. I did a long run that satisfied me even if I lost a bit too much time in the first sector compared to the Yamaha. I have to understand if I can improve or if it depends on the characteristics of the bike. At the moment, I don't want the team to change much on the bike."

And the tires, instead? We know that Phillip Island is a very challenging track for tires. Have you already chosen which compounds to use during the race?

“Tomorrow I'll decide which tires to use for the race. Today I worked on the front, while tomorrow I'll reach a decision for the rear. I tested the qualifying tires in the tests. I did two or three rounds, and I did very well. It'll be interesting to see how the qualifications work in this category."

Chaz Davies: "Better today than in the tests."

Instead, on the other side of the garage, Chaz Davies wasn't smiling. He finished in 13th position in the FP2 after having chosen not to get on the track in the morning because of the adverse weather conditions.

“Today was better than the tests," Chaz said. "So I'm quite happy. I would have obviously liked to have finished higher in the standings, but we know that Phillip Island is a race done on tires, so I found it more important to work on those."

The gap between you and your partner is quite important. What are you missing to get closer to Scott and the best?

“I need to move forward with the bike tomorrow. I did it today, compared to the tests, but that's not enough. This is not the best track for me, and all the balance of the bike changes. I'll have to work again tomorrow morning and see how the Superpole will go to clear my thoughts."

It must be said that, besides Scott, who created a small void behind him, you're all close enough. You're the first of the riders above the second gap. What can this mean in view of the races?

“Yes, we're all very close, and it'll be this way all season because many fast riders have a good package. For the championship, and for the fans, this 2020 will certainly be a good show."

You and Redding are more or less the same height, but you interpret riding the V4 differently. What's the difference?

“Scott and I have a different riding style, and we both have strengths and weaknesses. This is a favorable circuit for Scott, while it's not for me."