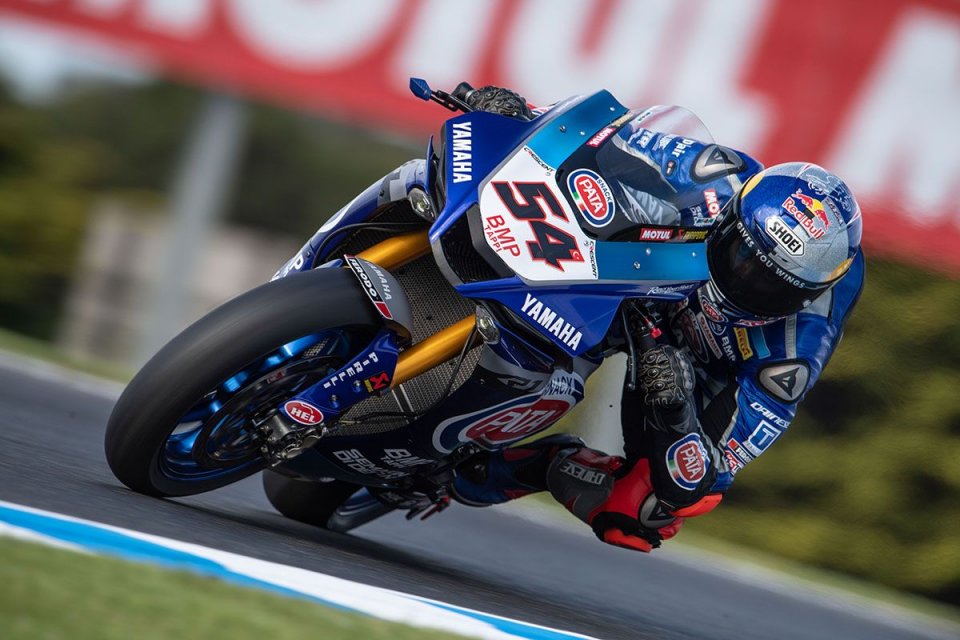 Yamaha confirmed after the first day of free practice at Phillip Island that they are ready to challenge Ducati and Kawasaki on equal terms in 2020. Toprak Razgatlıoglu and Michael Van Der Mark ended Friday in Australia in second and third place overall, both beaten only by Scott Redding.

The R1 has undoubtedly benefited from the evolution received thanks to the homologation of the 2020 model and the step forward in terms of performance seems evident. In particular, it is the Turkish rider Razgatlıoglu who impresses every time he goes out on the track, because with his aggressive style he is really spectacular and, on the stopwatch, this doesn’t seem to penalize him in any way.

"I pushed hard in my lap and it went well - commented Razgatlıoglu - but I think there are still some problems because the bike slides a lot and aggressively. My big problem is that at the moment I don't feel the bike handles very well, but tomorrow we will try and make a big change. Now we are ok, but I know we can make the bike turn much better. Today we tried a completely different set-up and also different tyres from the ones I am comfortable with, but the standard solutions work much better and tomorrow we will go back to those. For the rest everything is ok, I have excellent sensations on the bike. As I said, I would just like the bike to handle a little bit better".

The R1 has improved, but at the end of the straight you are never among the fastest, is that a problem in view of the race?

"The Ducatis are very fast on the straight, but it's not too big a problem. You win with other things. Just look at what happened last year between Rea and Bautista."

If we look at the way you ride, we can see that you make the bike drift a lot. Does that depend on how you open the gas? Maybe you are too violent?

"It doesn't depend on how I use the gas. In the afternoon we simply did some experiments with the tyres for the fuel consumption. The grip is not bad when the tyres have several laps on them, but we will see how things are only in the race. I think that it could be important not to push hard immediately in the race and then increase the pace after a few laps. I think the standard tyre is the best, but I want to see how things are on the track tomorrow morning".

You are very fast in the first two sectors, while you have to work harder in the third. Does that depend on the setup of the bike or are you not comfortable in that part of ​​the track?

"Yes, the reason why I am not as fast in the third sector as I am in the first two is precisely due to this small lack of rideability that I mentioned earlier. I have difficulty in turns 8 and 9, and also in the last corner I have some problems with the set-up used today. Sometimes today I also felt a lot of vibrations with the front end and this slowed me down. Tomorrow we will try something very different and I know that my feelings will improve ".

In 2019 you had some problems with qualifying tyres, do you think you have taken a step forward with this bike?

"I don't know if it will be easier to get the best out of the qualifying tyres with this Yamaha than it was with the Kawasaki. I tried in the Portimao tests and it seems that things with the R1 are easier for me with those tyres. The sensations are definitely better, and after two years it would be nice to be able to do some really good laps on qualifying tyres. Let's see how it goes tomorrow. This track is different from Portimao, so I want to try before I say anything"

Behind Toprak Razgatlıoglu was his teammate Michael van der Mark, who knows the R1 much better. With the arrival of a new and very fast teammate, the Dutchman will perhaps have an even more difficult benchmark to compare himself against than Alex Lowes, the rider with whom he shared the garage until last season in Yamaha.

"I am bored, I want to race - said Van der Mark laughing - I think everyone wants to race. Of course, I too would like to improve my pace a bit more, but I think we can do it. Let's say that improving a fraction would be the best, but if we were to race now, I think we would be ready to do it."

Like your teammate Razgatlıoglu, you also looked to be rather slow at the end of the straight. Does this R1 have less power?

"It is always difficult to comment on the top speeds at the bottom of the straight, because it all depends on how you take the last corner and also on how you enter the first one, braking soon or late. Maybe my top speed is not the highest, but this is the type of track you can win on even if you have a slower bike."

It seems obvious that the 2020 R1 is a major step forward. Is it going to be a good year?

"It seems that we have improved a lot since last year in fact. In 2019 only in race 2 did I manage to make a step forward here, while before I was in clear difficulty. This year we are much stronger, and it might be a completely different story. At least it should be. Let's say it has to be."

Why are you very strong in the first sector while you struggle a lot in the second?

"I don't like to brake too aggressively, that's why I'm strong in the first sector. Loris instead brakes hard and is very fast in the second sector. Scott maybe has the same problems that I have, I don't know! If you only look at the results on paper, my last sector seems not to be the best, but when I made my fastest lap I also lost a bit in the last corner, so I'm not really worried that that sector of the track could be a real problem or a weak point for me. Everyone here has their own favourite spot here on Phillip Island and for me it's the first sector."