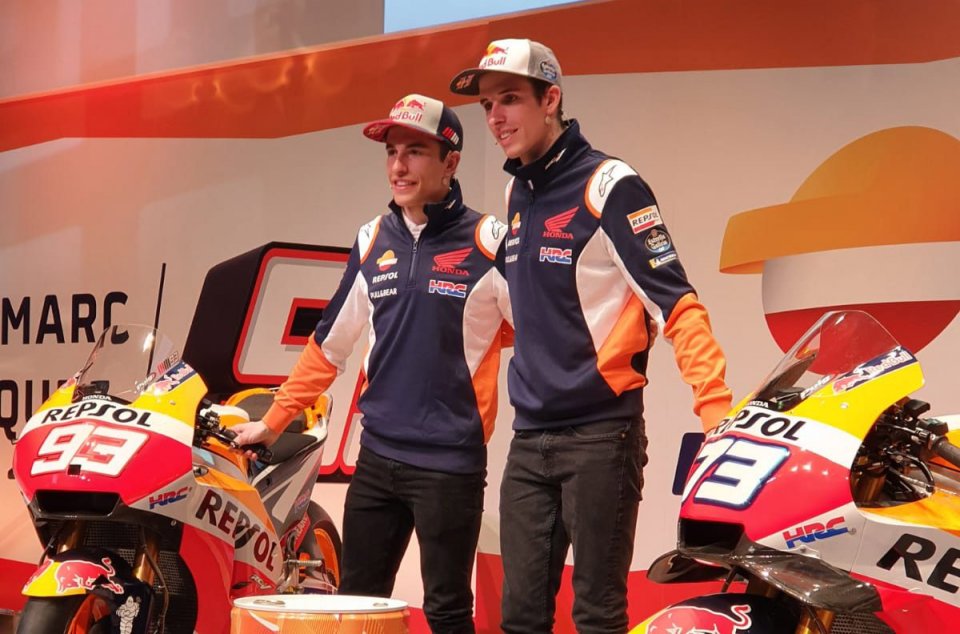 After the official presentation in Jakarta earlier this month, the two Marquez brothers presented themselves together for the first time with the European press at the Repsol Campus in Madrid, home of the main sponsor of the Honda team. Before leaving for Qatar where the championship gets underway next week, Alex and Marc answered many questions about the new bike, their relationship, the future and also about the Coronavirus.

Here's what they had to say:

Marc Marquez: "We will race with the 2020 bike, that will be the base"

First, the world champion took stock of the technical difficulties encountered in the winter tests.

“I am a perfectionist, I would always like everything to be 100%, instead we had a difficult winter, also because of my physical condition - he explained - In Sepang it had not gone bad but the bike had shown some weak points and in Qatar they all came out. The tests are used for this, you have to find the right way if you get lost. On the second day in Losail I crashed because I was looking for the bike’s limit and on the next day, we found out what the problem was. I am happy, because I once again got back to having fun on a bike. On the last day I was not that far behind."

Going back to testing the 2019 bike was the key…

"The base of the bike with which we will race will be the 2020 bike - Marc clarified - but there have been many changes in the winter and riding the 2019 bike was useful to reset and start again, the third day of testing in Qatar was like the first day in Valencia. We gradually introduced the new developments on that bike, and this allowed us to see our mistakes. Having said that, the base and the engine with which we will race will be 2020 ".

Marc Marquez: "In testing the most complete bike was the Yamaha"

It still remains to be seen what the level of the new RC213V is compared to its opponents.

"I know the Honda well, it always has the same character, it is a bike for which you must always be at 100% and it’s very demanding - he continued - From what I could see in the tests, the most complete bike was the Yamaha, but it might not necessarily be the case in the championship, races are always another thing. The M1 didn’t lose its cornering speed and it has improved its top speed. The Ducati has gained a lot of top speed and this will be an advantage on certain circuits. In Suzuki the rivalry between two teammates is an advantage, they will push each other hard, and the bike is now faster without losing its agility".

"Us? I can't say too much, we got a bit confused in the winter, we all did because we are a team. But on the last day of testing we understood the mistake we made. Time and the races will tell what our level is, but I don't think our situation is as bad as it seemed on day 2 of testing in Qatar. Now there is optimism in the team, I'm not yet 100% physically, but we are ready to start the season."

During the winter there was also a lot of talk about the new Michelin tyre, which seemed to benefit the bikes with the 4-cylinder in-line engine.

“We had doubts about those tyres - admitted Marquez - We wanted to understand what was happening, if that tyre changed the bike’s behaviour much and I can say that that’s not the case. You simply have to understand the tyre, which has more grip and allows you to stay more inclined, characteristics that have made it easier for the Yamaha and the Suzuki to get the best from them immediately. But I think they will be an advantage for everyone when you can interpret them, I expect everyone in the race to be faster and more consistent".

Marc Marquez: “My shoulder? In the beginning, the recovery was frustrating"

For a second consecutive winter, Marc’s physical condition was a limitation.

"Physically I’m fine, but the right shoulder is a little worse than normal - he said – The inflammation of the nerve has made it longer to recover. It was a harder winter than a year ago, the work schedule and times were similar, but while last year I improved day by day, this time in the first month I got worse. We didn’t know that there was a damaged nerve, it was frustrating, because the muscle became smaller and my arm was increasingly difficult to move. Once we had understood the problem, we changed our plans and the situation improved. In Sepang I didn’t do many laps, I did more in Qatar, it was my body that set the limit and you have to listen to it"

Alex and Marc Marquez: "We are brothers, teammates but also rivals"

Of course, it cannot be ignored that the two riders in Repsol colours are also brothers, even if they both prefer to make it clear that this will not change things on the track.

“It’s true that your first rival is your teammate, but in this case he is a rookie - specified Marc - He is also the Moto2 world champion and I am sure he will be fast, but our goals are different at the start of the championship. The day may come when we will fight for a race or for the title, but in the circuit, everyone only thinks of himself".

“Having Marc as a teammate means having the best example beside you to get to know the secrets of the Honda, learn and become fast - he said - If in the future we are rivals, he will be a rival like any other. For now, my teammate is the world champion and it's an advantage."

For the moment, Alex doesn't want to set too big goals.

"When you come to a team like this, you know that with hard work and sacrifice you can achieve all your goals - he continued - The team is giving me peace of mind and I want to continue like this, things will come with time and of course I want to win . The minimum target for this year? They told me that the important thing is that we see progression, realistically I would like to be rookie of the year and finishing the championship in the top 10 would be a good result. In the end I am happy with my tests and I really want to start. I haven't tried the changes to the bike that Marc and Crutchlow used on the last day in Qatar and I'm curious to do it."

Marc Marquez: “I signed for 4 years with Honda to have a technical peace of mind. Alex's renewal? He has to deserve it"

Marc, after his recent renewal, has another 5 years with Honda ahead of him.

"The main motivation was to choose a winning project and both Honda and I wanted it in the long term, also I always said that staying was my priority also for the heart, in the team I feel at home. I am happy , it was the best option for me, now I have peace of mind and technical guarantees. Both Honda and I want to win and not have any distractions."

“We have never talked about who will be my teammate, since I have been in Honda I have never been involved in certain choices. If Alex continues on this team it will be on his own merit, in the same way he got here. He has enough talent to make his own racing career"

"Coronavirus? We must put precaution in front of everything "

The last question was about the Coronavirus epidemic, which is also having an effect on sport, with many events being cancelled or postponed. For MotoGP, some doubts surround the Thai GP, scheduled for the end of the month.

“The Coronavirus worries the whole world, it will depend on Dorna if we go or not, but we must put precaution before everything. Some Japanese technicians stayed in Qatar after testing because of this problem," said Marc.

Alex agrees: "It’s better to avoid any type of risk".