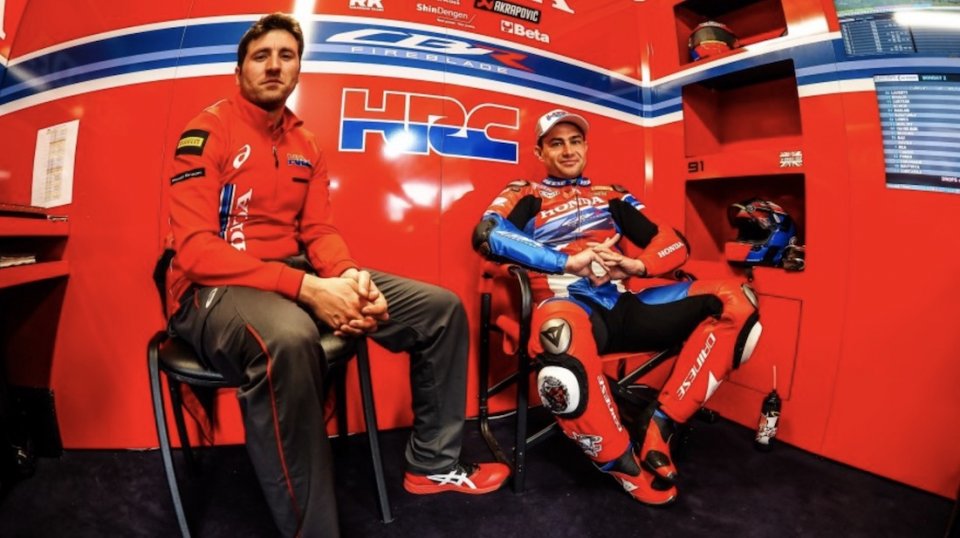 For a Honda in extreme difficulty with Alvaro Bautista in 17th place in the standings, there is one rider who is smiling, and that’s his teammate Leon Haslam who today ended Superbike winter tests in 3rd place behind the favourite Johnny Rea and Loris Baz on the Yamaha.

"Today was a good day - said Leon Haslam as soon as the test session ended - We probably made a few steps forward; in the afternoon the wind bothered us a bit, but it was the same for everyone else. I had a lot of things to try and I only tried 50% of them but it was not a bad day, I am third in the standings and not too far from the best times."

However, the most interesting question mark surrounds his teammate, Alvaro Bautista, down at the bottom of the timesheets and in clear difficulty. Alvaro said he was struggling to manage the massive power of the new Fireblade calling it a "too reactive" bike. What are the causes of his difficulty?

“For me, Alvaro's difficulties come from the fact that he rode a very different bike from this one in 2019 and that he comes from MotoGP which has different tyres and requires a different riding style. He is a very fast rider and is trying to find the right sensations on the bike but he will certainly arrive in the race".

Could it also be the conformation of the engine? Last year he was on Ducati's 4-cylinder V engine while this season he’s riding the Honda inline four...

"Yes, that's exactly what I meant. With the 4-cylinder inline, you need to adopt a more aggressive style and for a MotoGP rider, who is used to sliding the bike, it can be difficult to adapt to. Alvaro with the Ducati V4 was competitive last year and won a lot of races precisely because that type of engine requires a style that is more similar to that of a MotoGP bike. I have a more aggressive style and I find the inline four more natural".

This is also a bit of the situation in which Chaz Davies finds himself with the Ducati, but on the contrary, he is a very aggressive rider who is riding a V engine.

Another big unknown factor, as always when you are at Phillip Island, is the tyres. What do you think?

"In the past every time we came here we had to try different tyres but since last year I would say that there haven’t been any big problems, everyone is using the same tyre we raced with in 2019, which is also quite simple and consistent. Now we have to change our riding style or the set-up of the bike a little bit to allow the tyre to work better over 22 laps".

What is the balance of this two-day test? Will you be competitive in the race?

“We aren’t far away, even making comparisons with various types of rubber. I know we can be competitive with race tyres but so is the Kawasaki which is the benchmark. We have certainly made some big steps forward, but we have to see in the race if my feelings are confirmed or not. I am focused on race pace and I think I am doing better in that area than over one lap."

Who is the favourite for the first round of the season?

“Johnny is certainly the fastest, but Ducati and Yamaha are also in good shape. Ducati always make a difference in the race while I think Yamaha are stronger over one lap, we'll see."