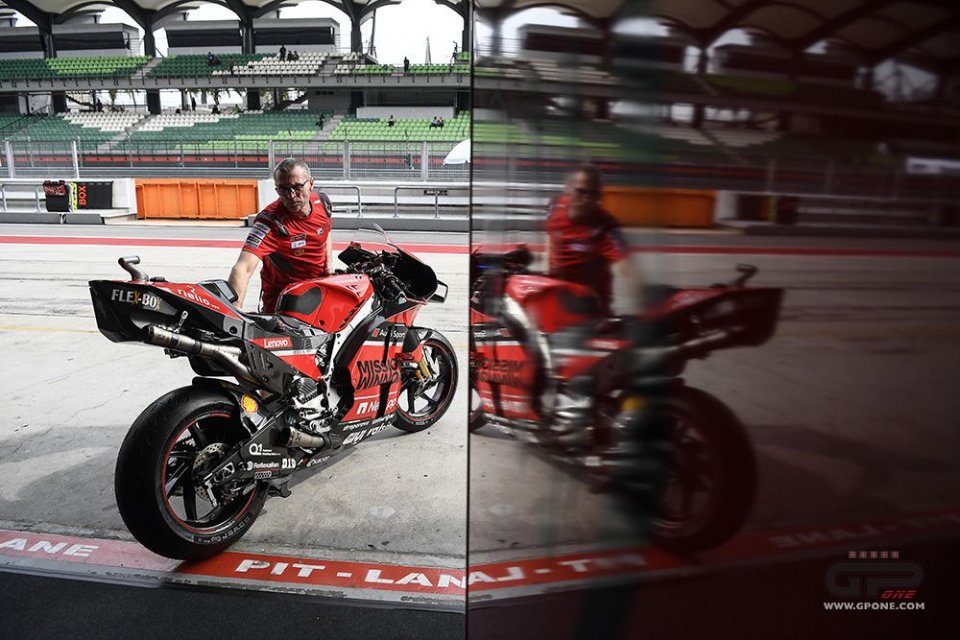 These three test days in Qatar will literally be the last opportunity for the various manufacturers to try and put into practice all the indications received by their riders in 2019 end-of-season testing at Valencia and Jerez, and the first pre-season session at Sepang. We will on the ground LIVE to follow them and bring you all the details of everything that happens on the track. The tests will take place starting tomorrow from 11 to 18 CET and we will be there with all the info and latest news.

It is still possible that there will be some important news in these last days at Losail, just a few days before the date set for the homologation of the bikes and the freezing of the engines. In fact, no one wants to show their cards to their rivals, and everyone is patiently waiting for the tests to pass before showing the aces they (possibly) have up their sleeves. Ducati have always been the best at playing this game, and they still have to present the aerodynamic innovations promised by Gigi Dall’Igna.

Ducati are ready to surprise with aerodynamics, but they must adapt to the 2020 Michelins

At Borgo Panigale they have kept their cards close to their chest all winter, not offering their rivals the chance to copy some solutions before the start of the season. So they are waiting for the very last moment to send the most ‘extreme’ aerodynamic solutions to the track, in the hope that they will be able to solve at least in part the problems that emerged at Sepang, especially as regards the relationship between the GP20 and the new Michelin tyres. Dovizioso did not hide his concerns, but he also specified that in Malaysia there was no time to do the fine-tuning work on the set-up in view of the tyres, which will instead be a fundamental aspect of the tests in Losail.

Yamaha went away from Sepang with a big smile on their face. Vinales was the fastest in race pace, Quartararo over one lap and the general feeling is that the M1 was particularly comfortable in Malaysia. The new Michelins enhance the smooth qualities of the M1 by hiding some flaws on corner exit which in recent years were the problem with this bike.

Losail will be an important test, to try and understand how accurate the data accumulated in Sepang were in different situations of temperature and surface grip. The hope at Iwata is obviously to be able to replicate that excellent test.

It should be noted that these will be the last winter tests for Valentino Rossi as a 100% Yamaha Factory rider. From this point of view, the Doctor's time has passed…

Honda wanted to make a bike easier for everyone, but they don’t seem to have succeeded

One of the biggest unknown factors involves Honda on the eve of these tests. Marc Marquez's physical condition was not absolutely perfect in Sepang and the Spaniard also suffered a crash at the end of the test due to excessive fatigue.

His brother Alex is a rookie, so his indications do not yet contribute to the development of the bike and Crutchlow is - as always - a question mark, because he alternates sensational form with moments of great difficulty. The Michelins, perfect for the inline fours, seem to be a problem for the bikes equipped with the most powerful V4s, Honda and Ducati above all. Losail will be essential to understand both Marquez's current form, in view of the start of the championship, and to see how competitive the 2020 HRC package can be regardless of the level of physical fitness of their champion. They wanted to make a bike easier for everyone, now it is up to them to see if they have succeeded or if Honda are still hostage to Marc, who after signing the contract until 2024 has become HRC’s true beacon in MotoGP.

Suzuki were once again very fast in the tests at Sepang, exactly as they were in 2019 with Alex Rins. Mir has improved and is no longer a rookie but instead a mature and fast rider ready to attack especially in the race. The GSX-RR suits the 2020 specification tyres perfectly, the engine has gained horsepower and the holeshot system for starts should debut in Qatar. Rins did a good race in 2019, but the power gap against Ducati and Honda left him out of the fight for the podium. The goal is to stem this gap and exploit a potential that seems to have increased.

Have KTM and Aprilia made enough progress to fight at the top? We’ll find out in Qatar

KTM and Aprilia are two semi-unknown factors. The RC16 has made some big steps forward and Mattighofen's commitment is more than evident, with a new chassis and an engine close to that of Ducati. Pol Espargarò maintained a respectable pace in Sepang, although not yet at the level of the top men. Yet the general feeling is that 2020 may be the year for a definitive step forward for the men in orange. Some aerodynamic developments should arrive at Losail and it is clear that the hiring of Dani Pedrosa as a tester has made a big difference.

At Noale curiosity has reached fever pitch. The 2020 RS GP has had a superb start to its life, it was fast right out of the box and had only a few normal teething problems. The bike was literally assembled before leaving for Sepang, so the hope is that the speed that seems to already be part of its DNA will also be accompanied by reliability in the race. Aleix Espargarò was more than happy in Malaysia, if he were to start pounding away the laps without problems in Qatar, he will be even happier.

It is a pity that Andrea Iannone is missing, the Italian still immobilized by the sword of Damocles hanging over his career as a racer. Even if the doping matter were to be resolved before the start of the season in Qatar, a possibility that unfortunately still today appears remote, missing the tests both in Sepang and in Losail means that he will not have ridden for almost four months…

Quartararo in a magical moment: “Only in 2014, when I was with CEV”

Espargarò: “We went from a moment of silence to pulling down our visors.”