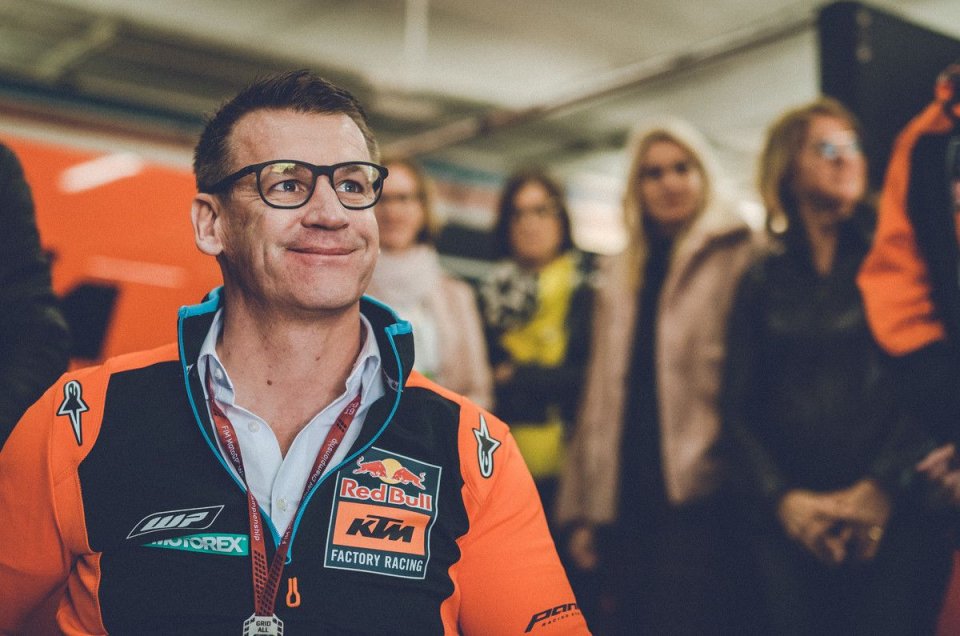 KTM is aiming decidedly high in 2020 and does so starting from the basis of the great growth shown throughout 2019 and confirmed in winter testing, when for the first time the 2020 version of the RC16 was put on track, the bike that despite being hated by Johann Zarco, has found in Pol Espargarò the man who can best interpret it.

Pit Beirer, KTM's Sports Manager, commented today on the start of the season for the orange team, who showed in the first tests at Sepang that they have in their hands a bike that is finally mature and ready to challenge the veteran MotoGP manufacturers on equal terms. The sensation is that the level in MotoGP is really high at the beginning of this season and that KTM, together with Aprilia, is really ready to challenge everyone for the top five, also contributing to make even more spectacular a championship that has in Marquez its own slaughterer among the riders, but which is actually much more balanced as far as the technical scenario is concerned.

“2020 is about to begin and I would say we are exactly where we expected to be. We’ve had everything on a road map and have followed it with the full support of the company and the board. Last year we worked with a satellite team and four riders that provided valuable feedback and the groups spurred each other on, but, at the same time, it pushed us to the limit for resources and raised us to the peak where we are now".

2019 was the first season in which KTM could count on a satellite team, specifically Hervè Poncharal's Tech3.

"I would not say we have a ‘satellite team’ now but instead we are a KTM ‘pack’ with friendship and trust, and I include our test team in that whole organisation. It’s fascinating to be able to develop insanely powerful, high-quality motorcycles – the pinnacle of motorcycling engineering - and we push the materials to the limit".

KTM can count on a well-assorted group of riders, including Rookie and category experts.

"Then there are the riders; Pol brings so much to this project and we know Brad very well and it is a great story for us to have our own Moto3 world champion now racing in MotoGP. Miguel will definitely put the factory guys under pressure this year and we have huge faith in Iker who has impressed us already".

It all started in 2012, with the Moto3 project that provided the basis for building the necessary know-how before arriving at MotoGP.

"Working on the Moto3 project in 2012 was the foundation of our current MotoGP programme and one of the most important steps for our racing department because it allowed us to start, learn fast and build with largely the same group of people. We’re happy to be able to play such a big role in that category. We will continue to give it everything we’ve got to make improvements in MotoGP.

2020 will be a crucial year for this project and Beirer is fully aware of this.

"This is an important season for us. I’m convinced we have done an excellent job in the background to be lining up with a very good motorcycle on the starting grid but we will be measured by our lap-times!”