Marc Marquez and Johnny Rea are the two riders who are dominating the current MotoGP and Superbike scenes. Every year, when the season is about to begin, one wonders if they will still be on top at the end and in the last four years the script has always remained the same. Indeed, for Rea, this rule even stretches back one more season, as the Northern Irishman has not left any crumbs for his opponents since 2015.

Ever since Johnny set foot on the Kawasaki, he has ripped the record books to shreds, with his run of five consecutive world titles. Over those years, he has won one more than Marc Marquez, whose six-title victory march was interrupted in 2015, when his compatriot Jorge Lorenzo triumphed with Yamaha.

Aside from that, Marquez and Rea have gone hand in hand in the past four years and as a result the question continues to hold centre stage: how to beat them? In SBK, the only one who has attempted to make things difficult for Rea was Alvaro Bautista, even though once the mid-season races arrived, he faded away like melting snow. Andrea Dovizioso on the other hand has been able to do something more, arriving at the final race of 2017 in with a chance of fighting for the world title with #93, even though we know how it ended.

At the end of the day the substance always remains the same, because Marquez and Rea are head and shoulders above the rest. We are clearly talking about two champions, who make consistency their strong point. Two champions who almost never miss a beat and for more information just go and look back over their last four years. At this point it becomes interesting to see who - between Johnny and Marc- is more difficult to beat.

If we take into consideration the number of retirements, Rea has been forced to raise the white flag only on five occasions, namely Laguna Seca and Lausitzring in 2016, Donington and Magny-Cours in 2017 and Brno in 2018. Always due to technical problems and not to be attributed to the rider himself. In fact, in America it was his motorbike that abandoned him, while in the UK it was due to a faulty Pirelli tire, and then it was the turn of the skirmish with Sykes in the Czech Republic.

In this respect, Magic Marc can count on one more retirement, which makes it six times in the past four years that he hasn’t seen the chequered flag. It started with Phillip Island in 2016, after winning the world title, continued with a triple zero in the following season picked up in Argentina, France and the United Kingdom, to which Australia was added again in 2018 and Austin last year. Out of all these retirements, the only ones Marc was not to blame for were Silverstone and Austin, when his Honda abandoned him. The first time for engine failure, then an electronic problem in Texas.

In addition to the DNFs, there have also been those occasions when both Marc and Johnny ended up on the ground, but they still managed to get up and get to the finish line. To the Kawasaki rider it only occurred once in the last four years, in the Superpole Race at Misano, where he finished fifth. To Marquez instead four times: twice in 2016 at Le Mans and Sepang, just like in 2018 in Argentina and at Mugello. What happened at Misano could be considered as the only real mistake made by Rea in the last four years of Superbike. You got it right! In four years Rea has made a mistake only once, but despite this he still managed to reach the finish line, bringing home useful points in view of the championship.

Numbers in hand, between the two the one who makes the fewest mistakes is therefore Rea and consequently this is a headache for all of his opponents. The reason is that if they want to aim for the title, they cannot afford not to see the chequered flag more than once throughout the whole season. This is one aspect that must not be overlooked by his rivals in view of the 2020 season that gets underway shortly.

Lest we forget… there is also the simple matter of race wins: 59 for Rea against Marquez's 32 from 2016 to today, but from this point of view a true comparison can’t be made because of the different race format in MotoGP and SBK. 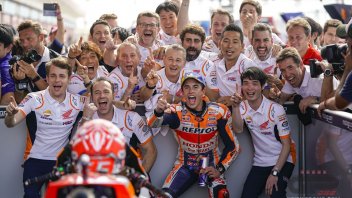 "I was slow last year, but now I have everything I need to stand out. I wanted to win in Qatar, but a fourth place means a lot to me."
1 day 17 hours ago

As the situation remains in a state of constant evolution, new dates for the French GP and the recently-postponed Gran Premio de España cannot be...
3 days 56 min ago