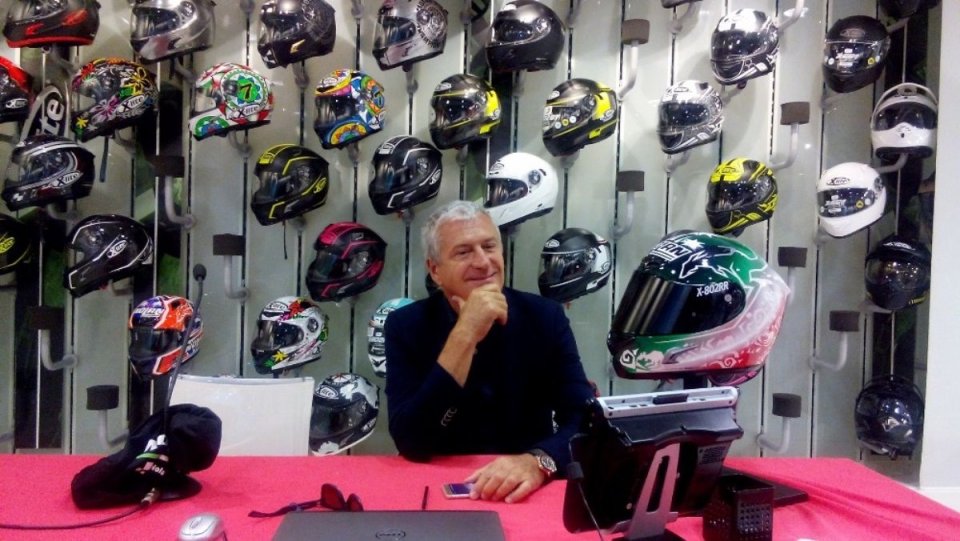 The MotoGP rider market has started up quickly, Yamaha has got in well before all its rivals with the confirmation of Vinales and the promotion of Quartararo to the factory team. A cracking start to 2020 if you think that no one, apart from the two riders mentioned above, has yet to seal their contract. The work to be done will be frenetic especially for managers such as Alberto Vergani who looks after Danilo Petrucci and whom we met yesterday during the Nolan Group press conference.

"Yamaha's moves were natural - said Alberto, a man who knows the paddock and the background of the motorbike scene well - They have two young riders who go very fast on a bike that seems to be easy, as Lorenzo defined it. It is a logical choice and also quite predictable”.

Valentino, however, seems to have been somewhat left to one side by Yamaha ...

“As far as Valentino is concerned, it must be recognized that this too was a reasoned choice. He is a monument for Yamaha and motorcycling, but he is at a difficult age especially because Quartararo was going faster. Rossi could be in Petronas next year which is a team that is worth as much as the official one and with a factory-spec bike, I think it was a win-win situation for everyone”.

Over the years, however, it has always seemed that Yamaha was dependent on Rossi given his incredible importance in the paddock and also for the technical aspect of the rider. Now has the situation been reversed.

“I don't think Yamaha were dependent on Rossi before and I don't think it's the other way around now. There was a strong relationship, Valentino is not only a rider, he is a fundamental character for the whole movement as tracks around the world are full of his fans. Now Valentino is reaching an age where it is difficult, the regulations say that at 50 years of age you can no longer do the world championship. Now he will have the chance to race another two years and maybe go back to winning and for Yamaha he will still be a brand name”.

In the light of these movements, we can say once again that Ducati has waited too long to move, missing out on two of the market's best riders.

"Well, I don't know how much they were moving; apparently they were, but they have remained with their five riders to decide how to continue in the future, then in their strategies there could be Morbidelli or some young guys".

Yamaha also caught everyone napping on Jorge Lorenzo by immediately realizing that his was not a complete retirement but only a goodbye. How do you view Jorge arriving in Yamaha as a tester?

“Jorge was being a bit of a wise guy in Valencia when I asked him if he would really retire; he replied that he would have done it 99% so then I realized that he could return. Then seeing Yamaha not confirming Folger and letting go of Zarco I put two plus two together. I don't know when they agreed, I don't think it was in the summer."

So…we will see him on the grid next year?

“I am sure that if he manages to detox himself from the stress in this test year, even if he only does some wild cards, then yes. After all, they have stated Barcelona and they will definitely race there, I think there could really be a Rossi-Lorenzo team in Petronas. Once again, we have to congratulate Yamaha for holding more aces up their sleeve."

All these movements, however, could favour your client, Danilo Petrucci, who after last year's confirmation struggled to find good results on the track and already seemed to be on the way out of Borgo Panigale. Now what will happen?

"Danilo must try to do well in the first part of the year and then see a little bit about how the market is doing. He has never had an easy time in confirmations, there has always been someone else in the middle. This year we would have other opponents but without Rins, who will probably remain in Suzuki, Quartararo, Vinales and Marquez who has yet to sign with Honda, the circle narrows and I don't see many other riders around. The first part of last season created expectations that then created a disappointment at the end of the season, it is wrong to say that there was someone who already wanted him out of Ducati, now he is calm and starts from scratch. He understood where he went wrong during 2019, thanks to the mid-season tyre change that brought Yamaha back to the forefront. This year we start with an uphill battle, the conditions do not seem to favour us even though Malaysia was only the first test. We will have to work hard as usual".

From a planning point of view, however, if Petrucci doesn’t go well with Ducati what are the possibilities?

“We will see, we are not in a position to be able to decide yet, we have to wait for events and if they are positive or negative. By confirming their riders, Yamaha created an opportunity."

Last comment about Melandri, who retired from racing but was close to Yamaha SBK as a tester.

“It didn't come to the table as an opportunity, but what I can say is that Barni had been trying to get him to race. I must say that he is really well now, he has liberated his head after 22 years in the business."