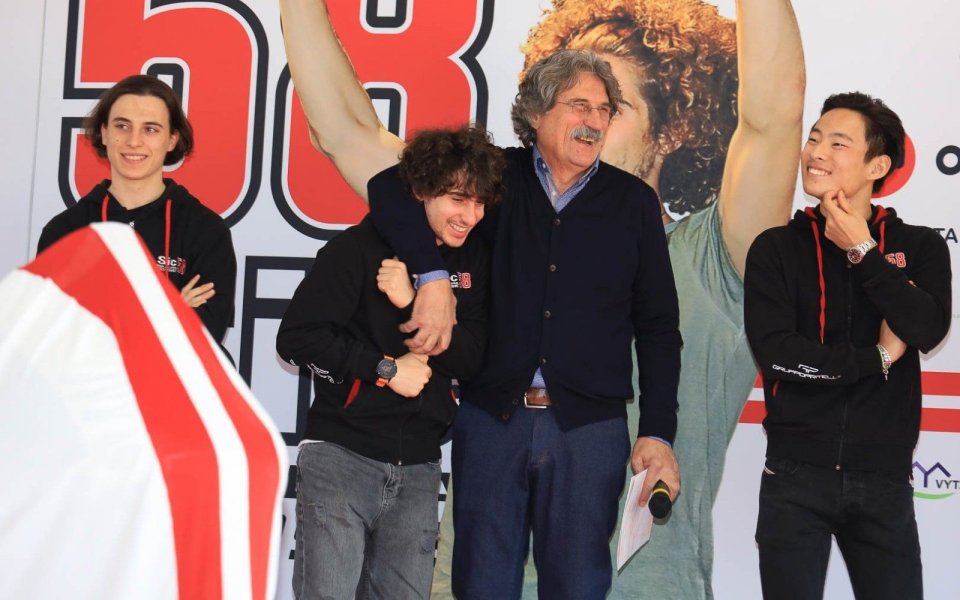 When Paolo Simoncelli speaks, he's always interesting to listen, for many reasons. Primarily because he speaks with his heart on his sleeve, for better or for worse, and this can only influence you in one way or another. As is often the case, he's the one who leads the presentation of the SIC58 team, proving how at ease he is on the track as well as on stage. The coming season is undoubtedly important, and the goal to achieve the title (even if we can't mention it) is more alive than ever.

“We can't settle," he confessed. "We have to do well because both the riders and the team have the experience and the skill to do it. We were a bit unlucky last year, which happens in this category, but we might be able to recover this year. There have always been ten riders in the Moto3 who could win and everyone really wants to be seen, leading some to exaggerate."

During the presentations, you talked about the firm will to remain that the riders have, which confirms how much they respect you and the whole team.

“That's something that moved me. Suzuki has been with us for four years and wants to close the circle by giving us something back. Antonelli for three, and he has settled in within the team in the best way possible. The teams that requested them had put important figures on the plate, but they wanted to stay."

You also mentioned that you'll be losing them in 2021. Is their move to the Moto2 a sure thing for both?

"I think it's normal that both want to make the jump. Nicco is 24 years old and Tatsu 22. They're doing well and, therefore, it's normal that their dream is to get into MotoGP. It would be nice if I could give them a bike."

Is there willingness to create a team in the Moto2?

“There is, but it doesn't depend on us. It depends on Dorna and its regulations, since it wants only 28 bikes on the grid. I want to go up in category, I want to get to the MotoGP."

Is there still something your riders can be taught?

"I don't think so because they're already a certain age, but races are races, and they respond to some dynamics that are difficult to control and manage."

The two riders will have a single chief technician this year, Marco Grana. How did this idea come up?

"The motivation was primarily financial. I reasoned a bit like an entrepreneur, then finding the right people helps and, in my case, I was lucky enough to meet a person like Marco."