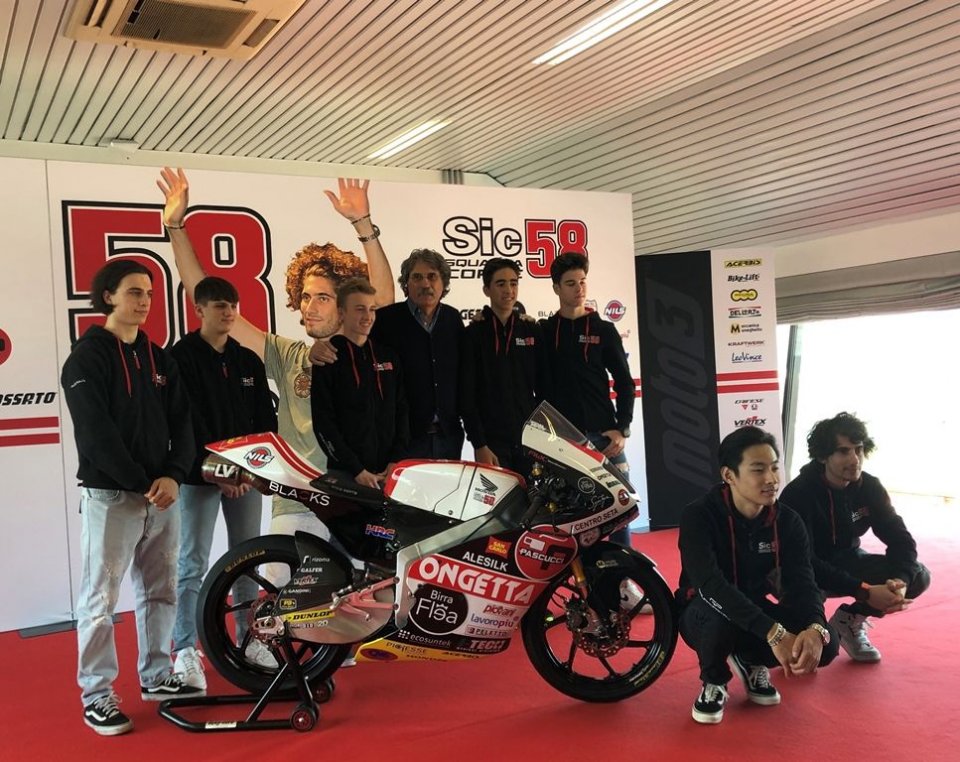 A new year of emotion and wins, in the name of Sic. The 2020 season of SIC58 Squadra Corse, which as per tradition chose the Misano World Circuit "Marco Simoncelli" to present its riders and team, officially got underway today. The team, now in its fourth year in the world championship, is still looking for definitive consecration, after achieving its first historic victory (and first 1-2) in Jerez last year, then repeated at Misano. The buzzword for the new year remains continuity, with the confirmation of both Tatsuki Suzuki and Niccolò Antonelli, as well as Mattia Casadei as regards the MotoE.

Paolo Simoncelli obviously remains at the helm, and as always is the showman also on the microphone. "The past year has been intense, both for the MotoE debut and for the great start in Moto3. MotoE took my sleep away, also because Casadei's first crash cost 65,000 euro (laughs). The Jerez 1-2 made me think of a great day for Marco, these are incredible coincidences. The goal is to do better than last year."

Paolo spares no words for his riders, who have almost become his children. "Tatsu and Nicco hated each other at the beginning, but now they collaborate and are friends: I don't think there is a team in Moto3 capable of keeping two riders for more than two years. Many teams have made offers to both for 2020 but they wanted to stay, I'm very happy about this. We'll probably lose them in 2021, but it’s not the right time to think about that."

As mentioned the riders have both been confirmed, a sign that a real family is being created in the garage. Tatsuki Suzuki is well aware of this, in his fourth year under Simoncelli's wing. “Nico and I understand that collaboration works and we are applying it. The goal is to close the circle with Paolo, I grew up thanks to him and I would like to repay him."

Niccolò Antonelli for his part seems to have found the right serenity in SIC58, and is ready to begin what will be his ninth season in Moto3, which makes him a true veteran of the category. “A great team has been created, I feel good and I hope Tatsu does as well (laughs). I am convinced that I can do well, I don't want to settle for anything less”.

Technical management of the two riders will again be Marco Grana, in the role of crew chief. “I put the human aspect in front of everything and I feel comfortable with our two guys. The best engine? It goes to the one who wins (laughs). There is a lot of work behind us to get to this point, in the team there is an excellent atmosphere."

Obviously Mattia Casadei, pupil of Paolo Simoncelli for several years and ready to go after the title in MotoE, was also present on stage. “I thought the bike would have been worse, but then I liked it. It is a bike with great grip, with which you can have fun: I have to improve in qualifying, and in general I want to improve my results."

However, it is not only Moto3 and MotoE that give shape to the SIC58 project, given that the commitment in the national championships continues, in CEV in particular. In 2020, in fact, the red and white livery structure will be involved in Moto3 with Josè Garcia and Senna Angius, and in the Talent Cup with Harrison Vioght and Mattia Volpi.