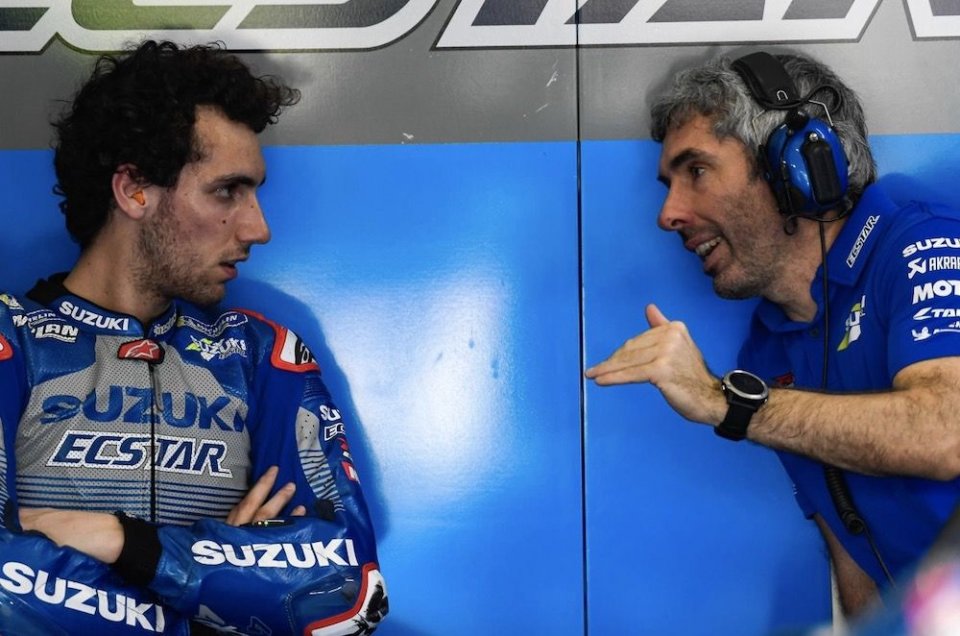 At the Nolan Group presentation in Milan there was also Alex Rins, a testimonial for the Bergamo helmet company, and just back from the Sepang tests where Suzuki presented the new bike that took to the track for the first time. Rins is one of the candidates for the wins this year judging by last year’s results; the Spaniard was in fact the most successful rider in the 2019 season after Marquez and together with Dovizioso and Vinales.

Alex, how did the Sepang tests go and what improvements were there on your Suzuki?

“I would say the tests went quite well and we are very satisfied with the bike. Suzuki has made a step forward with the engine, we were lacking speed on the straight but now we are a bit better. Making a powerful engine is not easy because you have to manage the horsepower. We also improved the chassis; I felt a little better when braking and everything seems to be going in the right direction."

The matter of tyres held centre stage during the Malaysian week. Michelin brought a new tyre that seems to favour bikes that were more suitable for carrying speed, such as Suzuki and Yamaha, and instead penalize the more stop & go ones like the Honda and the Ducati. Is that the case?

“For sure, the bikes you named are ridden in a different way, last year when I tried the new tyres, I liked them and also in these tests at Sepang we went well. They last longer even though they slide more. We will see, the tests are always strange."

Going back to last year, you had a first half of the season at a top level, then you sort of disappeared a bit. What changed in those months?

“I always aim to stay at the front in every race. At the beginning of the year I did it but in the middle of the season Yamaha made a step forward. Vinales and Quartararo were in front of us and also Morbidelli, especially in qualifying".

With the new bike, have you managed to bridge the gap from the Iwata manufacturer's bikes?

“We are working to have a competitive bike and the response that the Sepang test gave us was very good. We are still lacking a bit of engine, but we'll see in Qatar. In MotoGP it's easy to make mistakes. It may be that something makes you go faster over one lap but instead penalizes you in the race".

You and Mir make up a young pairing in today's MotoGP. What can this bring to the track against teams with more experienced riders?

"Well, I have been racing the Suzuki for four years and so I am quite experienced with this bike. For Joan this will be his second season and, of course, I would like to have a partner with more experience; he is very strong, and he did some good races last year, but I would like someone who can push me more”.

Nolan is your helmet partner. How much is safety improving in the premier class?

“You can see that Nolan is working hard on helmets and safety, a lot of technology is being developed and I am happy about this. As for the tracks, I have to say that they listen to the riders a lot in the Safety Commission; one example is a curb in Brno that this year we had to make longer overnight".

A last comment about Marc Marquez: it seems that he is still the man to beat, is there any rider out there with the consistency to take the world title away from him?

"Marc has experience with the Honda, he knows where the limit is and how far he can go over it. Now he is not fit but in Qatar he will be up at the front for sure. If any of us can beat him? I don't know; I beat him at Silverstone, but I don't know if anyone has the consistency to do it. Quartararo went very well during the last part of the season and could be up there as well."