Right now, Marc Marquez is like a heavyweight boxing champion who, despite the blows received, remains on his feet to defend his title, trying to regain strength for the next round. The Spaniard continues to suffer physically after his shoulder operation, and even today the positives deriving from his times (12th today) are contrasted by the negatives deriving from his condition.

"I ended the day with a good feeling - Marc declared - since my pace was very interesting this morning, but the downside is that I tried to use more strength and ended up by being already very tired in the middle of the day. Despite this, I returned to the track in the afternoon, and at the end of the day I had a little crash at turn 14, mainly due to the lack of strength: it was a situation that I could normally have saved with my elbows, but not today. My exits were slightly longer than yesterday, and the pace was better."

His physical condition is obviously crucial, and Marc explained the situation.

“In general, I am happy with the way my body has responded, but I must admit that both yesterday and today I struggled to get back on the bike in the afternoon, since it is not easy to reactivate the muscles. It is difficult to say at what point I am with my recovery: as far as the deltoid is concerned, I would say 60%, which I hoped would not particularly affect my riding. But this is the situation, I have to suffer today to be ready for the championship".

What if the race was tomorrow? Marc admits that, at the moment, a victory would be very difficult to achieve…

“It is difficult to say who would win; many riders have a good pace. I would say Rins and Vinales, who I’m not far away from over a distance of ten laps, but currently I am not ready to do the same thing over race distance. Last year in Qatar was a strange race and that is not my favourite circuit, but despite this I was very competitive. The first race is very particular because there are tests first, so the values ​​in the field change, and at the moment I am not setting myself a goal for that occasion."

Moving on to the technical aspect, Marc's perplexities increase, for several reasons.

“We have worked a lot in these days trying different things, and some of these I think can help us, but we cannot stop since the other manufacturers, primarily Suzuki and Yamaha, are also improving. I focussed on front end confidence, but soon I told the team that I could not give any precise comments because I was not riding the way I wanted. I hope to get better in Qatar, to really understand which way to go."

After all, the problems are clear, but difficult to solve…

“I can't say if the chassis is the right one or not, even though the comments from the three riders are pretty much in line. We have to improve in traction out of corners mainly, and we have to understand if the usual problem of confidence at the front comes from the engine or the chassis." 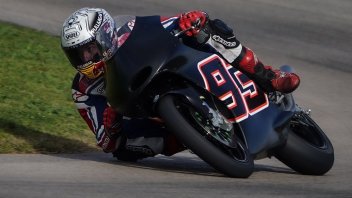 After a request from broadcasters, riders will have more time on the grid to allow for better coverage of all the teams.
3 hours 36 min ago