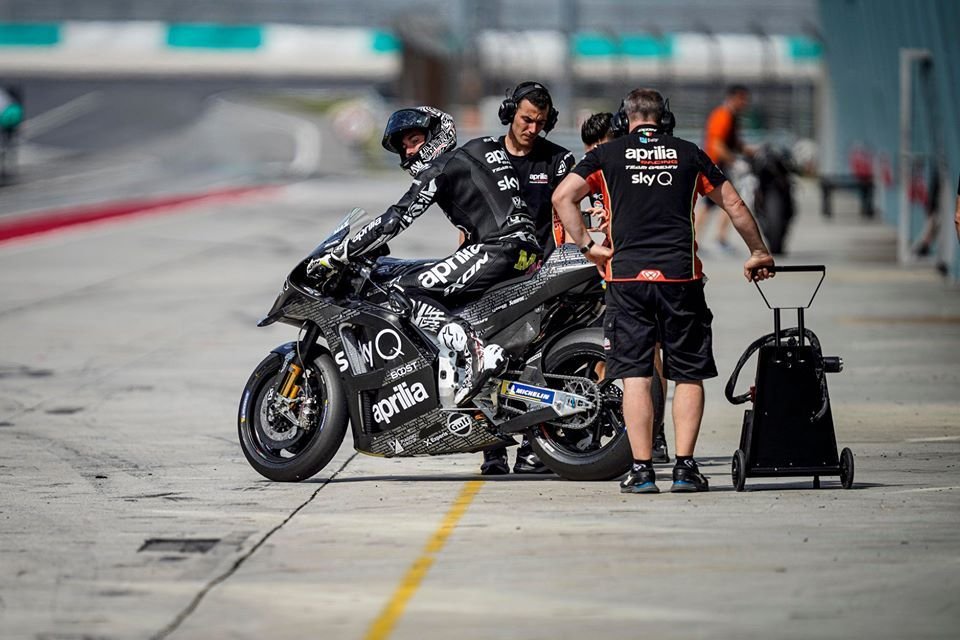 Aleix Espargarò continues to receive confirmation that the new Aprilia project has got off to a good start. The 2020 RS-GP is the surprise of Sepang, a clear step forward compared to the previous version and above all a bike capable of fighting on equal terms with the best bikes on the grid. The Spaniard had already shown he could set benchmark times with his new bike, but today he took a further step forward when during the first race simulation of this Aprilia he remained on the best pace of the leading group.

However, we are talking about a motorcycle that is only six days old and that before Sepang had never even put its wheels on the track, so some reliability problems naturally emerged. The race simulation was in fact interrupted on lap 13, while Espargarò was pounding away in the low 1'59s. Not even Fabio Quartararo, the fastest on the track at Sepang, managed to replicate a similar pace. All the signs are there for a season as protagonists for the Noale men, who may finally be seeing the results of their major efforts over the past few years.

"I am satisfied with the work we did today - explained Aleix - I was able to go a little bit better with the soft tyres, even though I actually expected to get closer to the low 1'58 mark. I wasn’t able to because in this phase I just wasn’t feeling it with the soft tyres, even though I have to be happy for these tests. The race simulation was impressive, I had a small problem on the 13th lap, when a tailpipe broke and I was forced to stop, but I felt really good on the medium, race tyres."

In short, the race simulation impressed you…

"I was very consistent on race pace, constantly on the 59.5 mark, often going even faster. Then when there were about seven laps left at the end of the simulation, I felt the power drop more and more. I realized I had a problem with the exhaust, and I stopped. It was a shame because I felt really very competitive and I think I could have stayed on the pace of 1'59 for all twenty laps, but the bike is very young, so it's normal."

At this rate, where do you think the Aprilia is compared to its rivals?

"If we look at the pace I kept and compare it with what the Suzuki riders did but also Quartararo, I was faster. I'm really happy for this. In general, I'm happy, I would have been pleased to be even closer to the top in terms of speed over the one lap, but we are talking about three-tenths away from the fastest rider, so I am happy".

Yesterday you weren't sure you were going to do a long run. How did you convince the technicians?

"The technicians weren't really convinced about letting me try the long run, but I told them it was really important also to understand how it would have gone from the point of view of the temperatures on the bike and my feelings after several laps. In these tests Bradley has been working on a lot of things, and Lorenzo also did some of the work on the new bike. Of course, having a fast rider like Andrea in the garage would have been different because it would have stressed the material even more and would have helped me more. But we know Andrea's problems at this moment, so I can only hope that everything will work out and he will be in Qatar."

Espargarò: "If we raced here tomorrow, I would get on the podium. I'm sure"

Are you close to the podium?

"If the race were here tomorrow, I think I could fight for the podium. I'm sure of it. But we won't be racing here for the next ten months. Now we have to go to a different track and find out how the bike works, we have to understand if it can finish the races. Right now, every time I push the bike for more than ten laps, something happens. It's not about being as fast as you can, but about finishing the races and right now that is our priority. I believe that with the times we set and with the pace we had in the long run, we have shown that the bike’s competitiveness is very high. I would be very happy if we had two more months before the start of the season, because the bike is very fast, but the technicians need time to study the data and understand everything well, maybe even to make some changes. We won't have this time, so we'll do it in the race."

Do you think that in Qatar you will be able to confirm this positive balance in terms of speed?

"I can't wait to try the bike on some other circuit, also because I can't stand it anymore to lap at Sepang! (Laughs) I want to find out how the bike behaves on a track with a different configuration and I usually feel good in Qatar: Aprilia has done a great job with the new bike but unfortunately these days we have had some small problems every now and then and I think this is the point they have to work on, because the first race is not far away".

Could you be the surprise in Losail?

"I would like to be the surprise in Qatar, I am very motivated. In acceleration here we were two or three tenths slower than the best bike, namely Ducati. But despite this I was able to keep a better pace than anyone. You never know what can happen in Qatar, but at the moment I'm more than satisfied."

Give me a summary of these tests and Aprilia's work over the last few months?

"I like everything about this bike, it is much better than the 2019 RS-GP and I can only be happy. We have to work on reliability because we have had some problems these days, but it is also normal because it is the first time that we have stressed the material, and everything is new. Then we are lacking a bit in acceleration from low speed, which we really miss because especially when coming out of the slow corners, we accelerate less than Ducati and Honda. It would have been nice to deal with these problems well in advance, but Aprilia changed everything in a short time but that's okay. If we look at Marquez and Honda, they tried the new bike between Brno and Misano in 2019, so they had plenty of time to fix things before pushing the 2020 bike hard here at Sepang. Aprilia did a fantastic job, I remember they were literally assembling the bike at the last minute in Noale to send everything on time to Sepang, so it's totally normal to have these small problems at this stage. I'm happy".