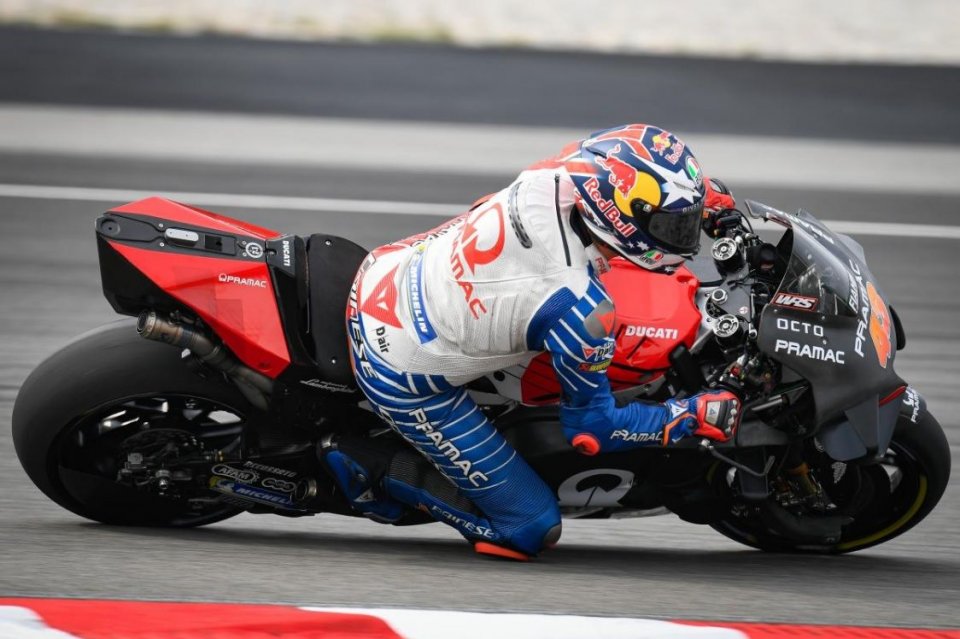 There's a Ducati chasing El Diablo Quartararo. We're talking about Jack Miller's who, by just 69 thousandths, had to surrender to the French rider's M1. Despite a second time, it is a test after all, the Australian rider showed a certain kind confidence and was busy molding the bike to his own needs.

“The bike performed well enough compared to yesterday," Jack began. "We have a particularly concentrated work plan here in Sepang. So I'm happy with the sensations we got on the track, and I can't wait to carry on the work plan tomorrow and continue it in Qatar. It's definitely nice to be up front."

Jack then took stock of what they did.

“We focused on several things. Yesterday, the guys on the team worked late. We're mainly working on the new rear tire Michelin brought and, consequently, the bike's balance. But also electronics, and the character of the bike."

Miller then talked about Sunday.

"I think we can get to 1'57" tomorrow, but we'll have to see the conditions. Today's time trial definitely surprised me. We started with the worn tires and then moved on to the new ones, and the time just followed suit. I have to say that the Ducati performs relatively well. There are a few things to focus on to improve, but the team is working hard."

Jack then went into what needs to be promoted.

“We have improved in acceleration, constancy, as well as many other aspects. So there are several different things, especially in entering and with speed in corners, and electronics. But we have to confirm them and improve those aspects where we struggle."

So that's what he's talking about.

“The most difficult thing is balancing the rear. I risked falling. These two tires Michelin brought are a great change, and you have to understand them. All in all, I felt good on the bike. The acceleration is great. Other than that, we have to keep working, since we have a particularly demanding schedule. Dovizioso? I don't know. I wasn't interested in him. I already many of my own things to think of."

Then there was Pecco Bagnaia, outside of the top ten, with a 14th time.

“It was a positive morning, and I was happy," he began. "The lap time with the medium tire was pretty good, and I managed to be constant. In the afternoon, we made some changes that I didn't like. So we'll take a step back tomorrow and concentrate on the race simulation. I spoke to the team. They told me that if I return to the garage after 15 laps, I'll  find it closed," he said jokingly.

Francesco then unveiled the work program.

“I'll have to try the super soft and ultra soft on the rear. Several riders already tried them today, and it'll be important to use them in order to understand. The thing that struck me is that I was faster today with the medium than with the soft. We'll also focus on a time attack on Sunday, and then do the simulation in the afternoon."

Lastly he spoke of whether he followed someone on the track or not.

“I followed Jack through two turns, but then they raised the red flag. As usual, when I'm on the track, I'm on one side and the other riders are on the other. Unfortunately, I can't ride with anyone but, in some way, not having references is better, in order to understand things and work on the set-up."