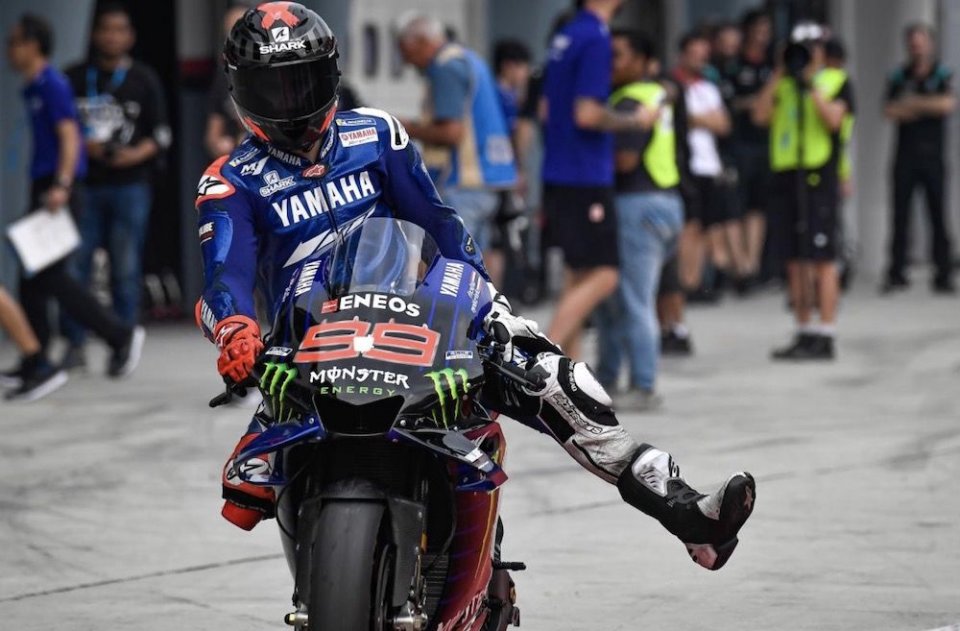 It is what it is. It might be the fascination of his return, it might be that seeing him with Yamaha colours brings to mind many great races and great memories, but when Jorge Lorenzo leaves the pit lane with the M1 everyone's eyes are on him. The Majorcan has completed his first tests as a Yamaha tester and a wild-card entry for the Barcelona GP already seems confirmed. Lorenzo, after three years in the background (leaving aside the exploit of three races won in Ducati) is slowly taking his place back in the paddock.

Jorge, how was it getting back on the bike you became champion with?

"Well, the bike I tried a few days ago was not much different from how I remembered the M1, which is either good luck or bad luck, depending on your point of view. However, the bike is still very competitive and easy especially for those riders who, like me, are looking to be smooth. In these days I have found a couple of points where we will have to work hard, which are those where Ducati and Honda go very fast. However, there are also many positive points”.

What bike did you try today and what are your feelings at the end of these tests?

“Yamaha decided not to give me the new bike this afternoon, they thought about it but in the end, this was their decision. There weren't enough pieces to prepare a new bike for me, but they would have been happy to have a fourth opinion on the new M1. However, today I found myself better than a few days ago because we made some progress on settings and electronics. I went a second faster without doing a time attack, I had planned it for the afternoon but then it started to rain."

Physically how do you feel? Did getting back on the bike have any consequences?

"I'm fine, my spine is perfectly fine, on a muscular level I did a lot of work in the gym, maybe I have to lose a couple of pounds that I put on during the holidays and do a little more cardio to reach a higher pulse rate. Now I’m going to stay a week in Dubai and then I will return to Lugano. I will do a lot of training to be ready for the Qatar tests."

What work did you do today?

“I didn't have the chance to do a time attack because in the morning we weren’t in shape with the set-up and tyres, and I couldn't have gone very fast. I could have done a time around 58.9-59.0. The pace with used rubber is similar to that of the others, I think it's good. In addition to this, I did some work with Quartararo and Vinales by comparing the new tyres with old and new bikes to give the technicians as much information as possible".

What is the difference between riding a motorbike without having the goal of winning the world title?

"In terms of stress, it's completely different. I don't feel nervous and under pressure to make the best time. I will no longer have the sensations of winning a race and I will miss it, but I have also removed all the negative things about being a rider: travel and pressure”.

Maybe now you can understand a little more why Stoner retired?

Getting back on the Yamaha didn't you think you made a mistake in leaving it three years ago?

“I am not someone who complains about decisions made in the past, a life without errors is impossible. We all make choices and 50% of them are right and 50% wrong. The experience in Ducati was intense and the one in Honda did not go well, but it still made me have some good moments. I'm a sportsman and a lucky person."

When did you realize that you could get back on track so early?

“Yamaha showed immediate interest in me when I announced my retirement in Valencia. Lin Jarvis contacted me quite early and at that point I had to decide if I wanted to ride again and make that decision. I wanted to study the contract and my options, then I decided".

New sponsor for Franky: the automotive industry is one of the main sectors in which Belotti solutions are applied and have always been appreciated,...
2 days 21 hours ago

Friday, February 27th, at 6 pm, live streaming on the team’s social media channels, but also on GPOne, Facebook, and YouTube: presentation of the...
6 days 21 hours ago