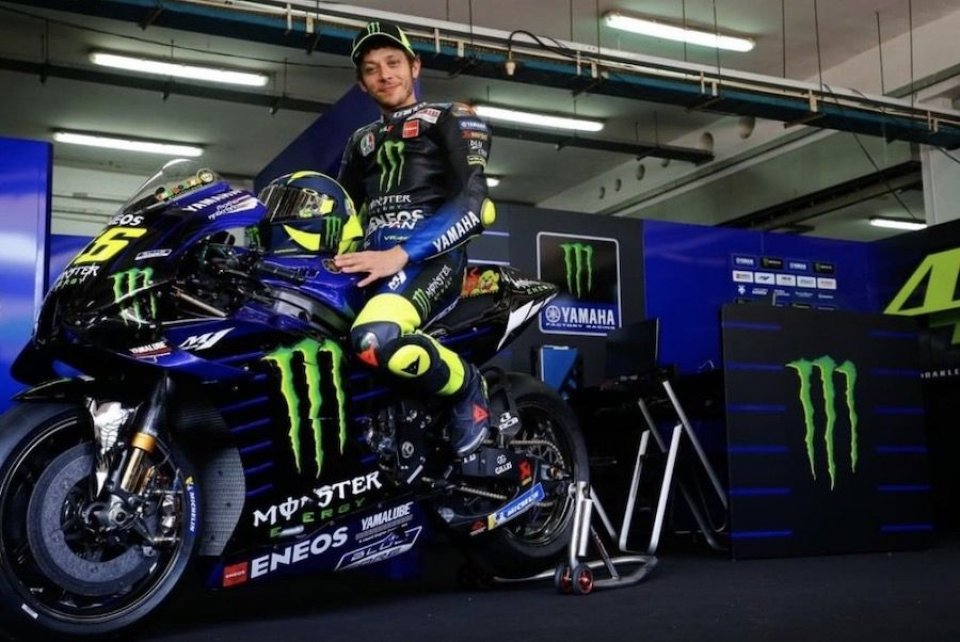 On the day of the Yamaha team launch, most of the spotlight remained on Valentino Rossi. His exclusion from the official team in 2021 and the unknowns related to his future were in fact the hot topic in Sepang.

"From a certain point of view, it was a difficult decision not to decide immediately on my future - Vale began, then continued - The consequence was in fact that Yamaha had to decide the team for next year. On the other hand, however, I had no other choice, because I need more time. When I am no longer competitive, it would be pointless to continue. This applies to MotoGP, but also to all other sports. To stay at the top, with the competitiveness there is, you are fully involved eleven months a year and for 85% of your time. When you are no longer young, it is tough. However, I asked Yamaha to support me should I decide to continue, and they confirmed they would. The first goal, however, is always to continue in 2021. The team would however be the Petronas one, which is of a high standard. It wouldn’t change a thing".

Except that the eventual agreement would not be on a two-year basis.

"I think one year at a time. And Yamaha agrees"

“By now I am thinking year by year. I think it's the best thing, amongst other things Yamaha agrees with me."

If you had to start again from Petronas would you do it with a completely new team?

“We haven't talked about it yet, as much will depend on Fabio's decision. He will have to evaluate what to do. The moment you change, you can also change everything. But at the moment there is nothing decided. The important thing is that Yamaha continue to believe in me, and should that happen, they will give me the maximum support".

A turning-point that Rossi expected.

"Yamaha’s decision was correct: Quartararo had an impressive season"

“Yamaha made the right choice, as Fabio was impressive in his first season. They might have imagined it, but not up to this point. He is young and strong, as a consequence Yamaha did the right thing."

You therefore confirm that it was the right decision…

“He finished several times in second place when up against a Honda of another level. I remember some of his performances like Valencia or in Thailand: he was really competitive, and it wasn't easy to be competitive against Marquez".

Lorenzo has joined Yamaha this year as test-rider…

“He was a perfect choice for Yamaha. I personally pushed a lot with the team and with Jarvis to talk to Jorge and focus on him. Maybe someone could have doubts about his performance, given the problems he had with Honda, but in the end, we know how competitive he can be. In today’s MotoGP it is important to have a fast test rider who gives the right information and helps the bike to improve".

Rossi will start the season after a particularly uphill 2019…

"Motivation depends on the results: if they don’t arrive, it would be difficult to continue"

“In the second half of last season I did some good races, but at the same time I suffered quite a lot. For a rider like me, no longer young, it is very demanding to stay on top. As I said, 85% of my life revolves around this world, between motorcycles, training, public relations, events and various things. To continue, motivation counts a lot, and this depends on results. Should these not arrive, it would become difficult to continue with a view to 2021. Precisely for this reason I decided that it was not right to sign the renewal contract, since I am not ready, and I do not have the certainties of two years ago".

There is a declared alternative however: the Petronas team.

“For me it's the best of all the options: they are a young team, serious and economically solid. Changing manufacturers is not easy, even more so when you are my age. It would be nice to build my own team, but it would take a lot of money. Better Petronas".

Valentino's future: retirement is like the event horizon of a black hole

The final decision has therefore not been made, but it is on the event horizon. Like a black hole to escape from or be attracted to.

“I don't have a precise moment in mind for the decision. Maybe it will be during the holidays, or mid-season. I'll have to think about it for a long time. I will only decide when I am ready. I'll have to feel it."

With Petronas you could carry on for some time, if you want.

“Being able to collaborate with Petronas would be fantastic. We have teams in Moto2 and Moto3 and we are aware of their size. The fact is that having a team in MotoGP requires a very different effort."

From the outside, Yamaha’s decision seemed to have caught the 9 times world champion off guard…

“I wasn’t surprised. I had been thinking about this moment ever since last October in Thailand, when Fabio confirmed that he is really strong on the M1. I couldn't decide before time, without considering my potential, because it would have been the worst thing. We met with Yamaha and talked about it."

The word 'Petronas' often peppers what Valentino has to say...

"The material with which Quartararo and Morbidelli worked in 2019 was not so different from ours. Other than that, I don't know if Fabio would have stayed in Petronas, seeing as he already had other offers."

"Lack of respect by Yamaha? No, everything was decided by the 2019 results"

The impression is that Yamaha have disrespected a rider with a glorious past...

"As I said earlier, it was a logical decision. The results make all the difference and those of Maverick, as well as those of Quartararo, led Yamaha to decide. Personally, I don’t see it as a lack of respect, also because if I have to continue there will still be a bike for me. If I had stayed without a ride, I would have thought otherwise (smiles)".

Rossi speaks as if he were already in 2021, so it is normal to ask him who he would like alongside: his brother Luca Marini or Lorenzo.

“I'd prefer Morbidelli (laughs). I have also heard rumours of Jorge Lorenzo ... it would be great to have him back after many years, but there is Franco in Petronas and he is going strong, even if he has been overshadowed by Quartararo's performance. Franco deserves that place more than anyone else”.

We also have to wonder what Yamaha would have done if Rossi had decided to continue.

"That is a good question - Valentino laughs heartily - but you have to ask them, I don't know what to answer".

The inevitable answer is because Rossi did not think about saying point blank: "Yes, I will also race in 2021".

"Racing when you are Valentino Rossi is a stress and a pain. But I still like to ride bikes"

“I never think of taking any risks, because coming to the races is a big stress and when you are Valentino Rossi, it's a pain from Thursday to Sunday, between commitments, fans and various things. You can't even go around the paddock. The only thing that gives me pleasure is riding the bike."

A response that implies that, even if he continues to be competitive, Valentino could still decide to quit.

"Sure! Why not? It would be nice to go fast and stop. I am aware right now that I will miss MotoGP. Being quick gives me pleasure, if I have to go after it, it would be complicated. Other than that, my opinion is that it is stupid to have such an early rider market. Unfortunately, it’s like this in MotoGP. These are the rules of the game."