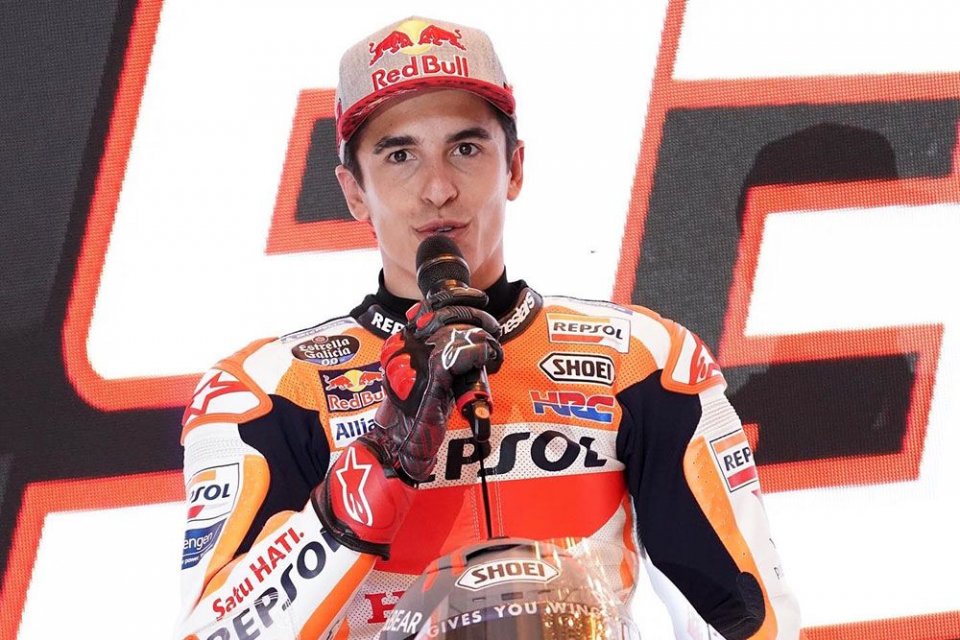 The two brothers are finally reunited. Marc and Alex Marquez side by side on the stage in the colors of the Honda Repsol Team. Those who were the first to lay eyes on them were their Indonesian fans, since business is worth more than communication, and the market that orbits around Jakarta counts more than dear and old Europe.

The two Marquez brothers seemed impeccable in the spotlight. Like real professionals, they kept their emotions in check, but the Cervera Cannibal still has a heart and something did transpire.

“If I said this wasn't special, I'd be lying," Marc smiled. "It's important to have my brother as a teammate, but when we'll be racing, he won't be [my brother]. I'll simply have the Moto2 world champion in front of me. I'll also be concentrated on my own stuff in the garage, and he'll do the same. We have different goals, but I won't be cutting him any slack."

You have to defend the title. Yamaha has already made its moves on the market to counter you.

“Those at Yamaha were in a hurry! I think if a rider signs a contract so early on it's because he knows that the bike is competitive, otherwise he'd look around."

Are you looking around?

"I've already started talking to Honda. As I've always said, this is my priority."

Surprised to see Rossi sidelined in favor of Vinales and Quartararo?

“I don't know how that went. Certainly, what they did was to plan for the future. They definitely spoke to Valentino about it, since Yamaha has always been respectful of him, and  they are so because what he's done is very important."

They also took on your former teammate Lorenzo as a test rider.

“It'll be interesting to see him after having struggled with the Honda. I think he'll go very fast with the Yamaha."

There's already talk of some wild cards for him.

"Why not? Like I said, he struggled with the Honda. If he'll be fast with the Yamaha, that means that the M1 is a slightly easier bike."

You'll be leading the development of the RC213V, but in what conditions is your right shoulder?

“Surgery seemed simpler than last year but, in the end, recovery was more complicated. I worked very hard to get to the tests in Malaysia in good shape, but I'm at 60% or 70%. I got the chance to ride a bike before coming here. It didn't go badly, but I only did a few laps."

How will this affect the tests?

"I'll have to find a compromise and manage to keep a good pace because I will definitely not be able to do many laps."

Are you also worried about the start of the season?

“I have a problem right now, but my shoulder is getting better day by day. My goal is to arrive in tip top shape at the first race in Qatar. I had a similar problem last year, and I was able to handle it in the best way. I'll try to do the same. I'm working well with my physiotherapist, Carlo. Now it's also time to do it with the team and try all the innovations that Honda has implemented to find a good foundation."

In 2019, you were almost perfect. Is there a chance for improvement?

"It was definitely my best season. I was fast in every condition and very consistent. I don't want to say that my goal is to do better, but at least to repeat myself. However, I don't like thinking too much about the past. I'll have time when I retire. I'm focused on the present, and we'll all start with zero points in Qatar. I think I'll have to work even harder because my rivals will want to make up for the difficult year they had."

In addition to Donington Park, the BSB riders will be in action in three further practice sessions at Silverstone, Snetterton and Oulton Park before...
4 hours 2 min ago

In Qatar, the first day of the Sky VR46 Avintia team rider in a selection of images on and off the track
4 hours 24 min ago

“The Formula 1 is a bigger organization. Everything happens faster, but the riders have the same attitude. Alonso returned here because he’s hungry...
1 day 3 hours ago