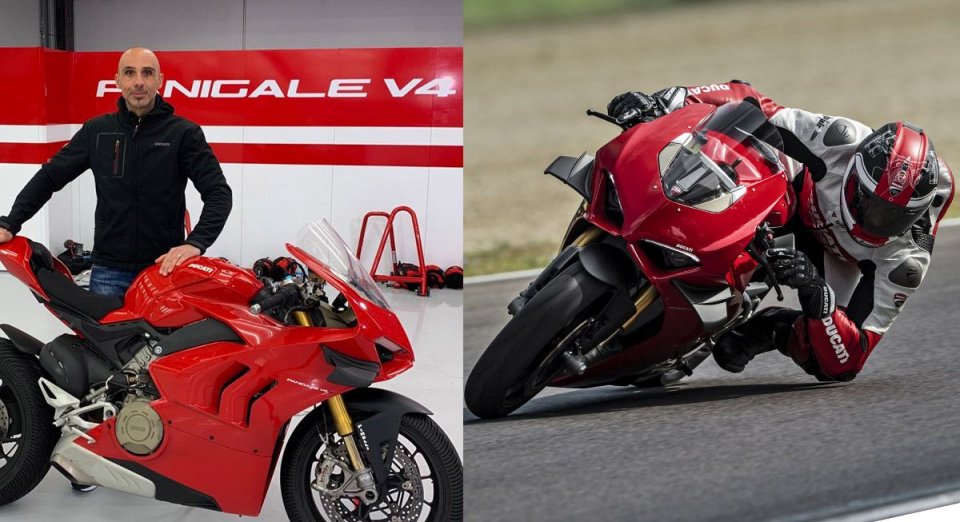 Alessandro Valia is one of the most important men behind the development of Ducati’s sport bikes. A rider with an enviable curriculum, in which the Italian Superstock title he won in 2002 on a Ducati 998S stands out. A bond with Ducati that therefore has its roots in Valia's true racer origins, who over the years has made available all his experience and sensitivity to Borgo Panigale technicians to provide fundamental feedback during the development of the new models.

Valia formed part of the development team of the first Panigale V2s and experienced the epochal passage for Ducati represented by the transition from the twin-cylinder to the V4 for its sporting flagship model. In fact, he was a true father for the Panigale V4 which was shown to fans for the first time in 2017, and he also defined the development path of the red Italian bike up to the 2020 version. The goal to be pursued – and in our opinion, achieved (look at the video test HERE) - for this version of the V4 was well defined from the outset, and Valia explained how he managed to make this bike easier to ride, while increasing its performance.

Where was the starting point for the development of the V4 2020 and what was your goal?

"The V4 2018 was already a very powerful bike, but more challenging to take to the limit. For the development of the 2020 model we set key points to improve different areas of the bike: performance, effort, repeatability, confidence. We moved the centre of gravity from performance to other areas that could improve and facilitate riding even for non-professional riders. The 2020 V4 is less demanding on a physical level and easier to take to the limit".

What was the biggest difficulty?

"Getting into the role of tester with the mentality of not searching just for performance, but rideability and ease of the V4. It is not so natural to improve the performance of a motorcycle without giving 100% on the track and steering development. It was a different approach, which paid off. I put myself in the shoes of an amateur client who needs to reach his limit more easily and repeat it, so as to prolong riding pleasure".

Why did you pour so many V4R solutions into the S?

"Because the R was an evolution of the S and some solutions brought important benefits, both to handling thanks to a less rigid front frame and to aerodynamics thanks to the Aero Package which stabilizes the bike and improves its performance, making the electronic controls less intrusive: DTC (Ducati Traction Control) and DWC (Ducati Wheeling Control). We wanted them to be enjoyable also for buyers of the V4S".

What was the biggest difficulty you encountered?

"It was very complicated to define the calibration of the new Ride by Wire map that regulates the engine's power delivery. Cutting peak torque was difficult for me to accept at first. For me, less torque was synonymous with less acceleration. And on the bike, you experience certain sensations first-hand. The engineers - Carlo Ricci Maccarini, who just arrived from Ducati Corse for the development of the SBK platform together with David Attisano, an expert in data analysis and electronic systems in Corse – instead evaluated that more linear but lower torque would have allowed the V4 2020 to improve acceleration. We spent whole days looking at the data and finding the best compromise, but I fought hard not to get the cuts that they would have used so as to not lose the character of a Ducati ... (laughs). It was a learning experience for me!"

How can you understand with how much torsional stiffness a new chassis should be developed?

"The new Front Frame chassis is the result of evaluations made from calculations based on the experience gained over the years in both MotoGP and SBK, which are subsequently re-assessed in a series of instrumental and rider feeling tests so as to be introduced on a production motorcycle".

How many kilometres did you do to fine-tune all the innovations on the V4 S 2020?

"It was a long task in which we did between 7,000 and 8,000km of track. Each area of ​​activity is isolated and exclusive checks are carried out in order not to contaminate the test and obtain certain and scientific results. An ABA method is always used, we do checks, and counterchecks and we go back to verify the quality of the result. I am never alone in this complex activity, but I can always count on all the guys, engineers and otherwise of the Vehicle Testing department".

Is it difficult to explain to the engineers the sensations that you feel on the bike?

"It’s the most difficult thing, but things are made easier by two factors, both regarding data acquisition that often translates certain feelings that once could not be “read" by computers and due to the fact that in our department most of the engineers are motorcyclists, so we often speak the same language. Engineer Luigi Mauro, head of the Testing department, is often the last one in the evening to take off his helmet after having personally verified the quality of certain modifications".

What point are we with the development of the V4? What are the areas where you can further improve the product?

"You only have to be patient until 2022! (laughs). Seriously, in such a complex project our Experience Department never stops. We have defined a different working method by intensifying relations both with the Racing Department and with some testers, who are not "pampered" by tests, including Michele Pirro. It was good and very interesting to be able to deal with one of the best MotoGP testers. The problem with trying and trying again the same change is that you adapt and "mask" some problems with your own riding style". 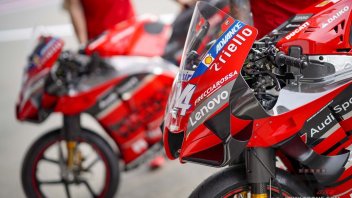 Ducati: "We've been the most affected by the stop in development"

Thanks to the retirement of the leader of the classification Glenn Irwin in Race 2, the championship now sees four riders enclosed in only 12 points...
1 hour 8 min ago

Our popular “Frankie” confessed to being a victim of the degenerative disease, but he hasn’t given up: “The human body is like a motorcycle, if it...
22 hours 1 min ago

At Oulton Park the Australian took his second career victory. Nothing doing for Iddon, after leading the race for a long time. 5th championship...
1 day 2 hours ago

Jack: "I set my time thanks to Rossi and Bagnaia. Everyone will have tyre management in a corner of their brains". Fabio: "I'll try not to make a...
1 day 12 hours ago

Dominique Aegerter took his second win of the season overtaking the man from Rimini on the last lap, Ferrari finished in third place for having gone...
1 day 17 hours ago

“I tried to get more grip on the rear and didn’t succeed. It’s useless to waste time. I’ll focus on the front to brake like Ducati, Honda, and Suzuki...
2 days 3 hours ago