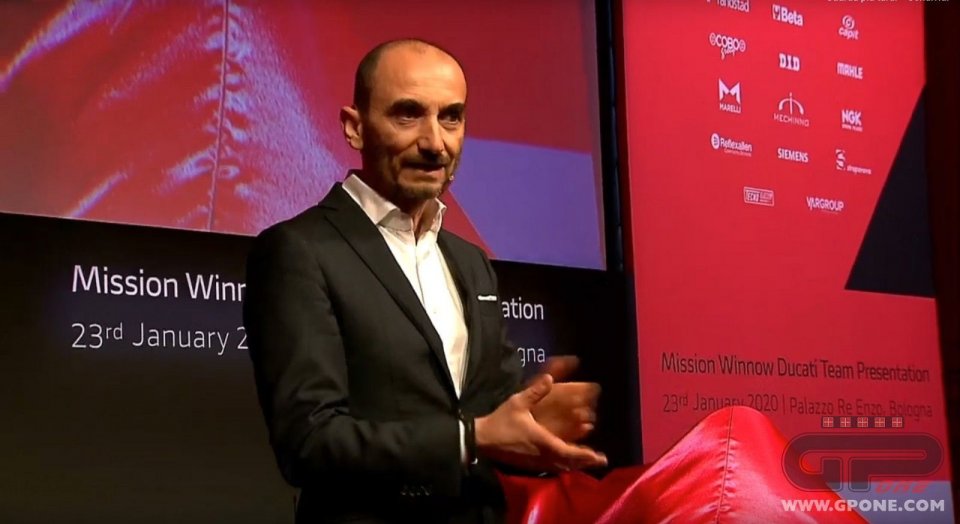 However, this result on the market, a reason of great satisfaction for the CEO Claudio Domenicali, was not matched by identical success in MotoGP.

Not that Dovizioso's overall second place for a third consecutive season behind Marc Marquez's Honda is to be considered a bad result, but obviously the Italian bike is on the track to win.

Ducati will try again this year, of course, with an identical team and a further improved GP20, but one could say that perhaps it would be appropriate to look more carefully at the rider market, which, in any case, will reopen completely at the end of this season.

The question is: does Ducati have a big enough budget to shop around?

"Ducati has a budget available for the extremely important sporting part - reveals Claudio Domenicali, who adds - In the past years we have made important investments in riders. It cannot be said that we have not achieved results because we have not made investments in the riders. It is true that there is always competition, but I also invite everyone to reflect on the value of participating in racing for each brand. It is important to win, of course, but I think that manufacturers that always and only win with the same rider, while their second rider, with the same bike, struggles to stay in the top ten, do not get as much benefit for the value of the brand as Ducati. For us this is the most important value. All motorcycle enthusiasts can judge that Ducati is technically capable of making available technology that can then be purchased. We were the only ones in 2019 to win with both riders. While the manufacturer that won the world championship had difficulties, not only with the factory team but also with the satellite ones. An attentive fan might have some doubts about how much merit for the competitiveness must go to the bike or to the rider".

But how much of the MotoGP technology then goes into production?

"It varies a lot according to the type of product - Domenicali continues - On the Panigale it is perhaps more than 50% of what we discovered from MotoGP, on different products, Multistrada, Diavel and Monster this transfer is instead significantly lower. Each of our products is the most sporting bike in its segment. Anyone who buys a Ducati knows that they are buying an exciting product, even if we are working to make this sportiness 'easy'. For this reason, for example, we have ABS cornering which gives the greatest safety in braking with the bike leaning over. And then of course there is always Traction Control. High technology while maintaining sportiness ".

Is the transfer of technology more important than absolute victory?

"I prefer to finish second demonstrating that all the riders on our bike can win, rather than winning repeatedly with only one rider while all the others don't even go close. That demonstrates in some way that performance is dramatically linked to that particular rider. It is an extraordinary sporting performance by the rider, but less important than the brand's technology".

Are we to deduce that Ducati will not look elsewhere for riders at the end of 2020 or before?

"Certainly not. As a team we must try to always have the best rider with us. But I am warning you because if the best rider ever makes it somehow extremely complicated for the others to produce their best performance, this is a situation that may not be the best for both the team and the brand ".

In that case, inevitably 2018 with Jorge Lorenzo comes to mind. Don’t you feel a little guilty about his retirement? Had he stayed in Ducati, maybe he would still be on the track.

"Lorenzo's retirement was down to him. It was the personal choice of the rider ... and then he got hurt ... I would prefer to talk about 2020, in 2018 we had some good races, but I like to think more about what there is to be done rather than what has been done".