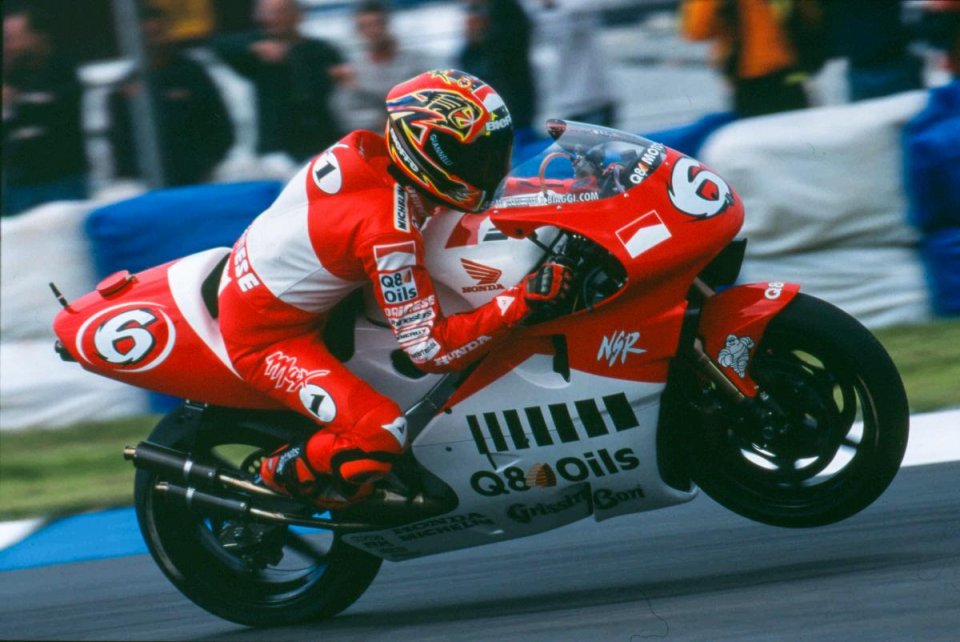 Max Biaggi has been awarded the title of MotoGP Legend, an honour that few can boast and which in a certain way contributes to enrich a simply extraordinary career. Six world titles, including four in 250cc and two in SBK, make Biaggi one of the most successful riders in the history of motorcycling, but obviously the years that will remain etched in the minds of the fans are those of his great races in the 500cc Grand Prix category.

In particular, there is that first step by Max Biaggi in the top class that is destined to remain legendary for ever. At Suzuka in 1998, Max made his debut in 500cc and wrote one of the most amazing pages in the history of motorcycling. Here is the story of that epic feat.

Let's turn the clock back and project ourselves into the mid-90s, in particular to 1996. Max Biaggi has already won two world titles with Aprilia in 250cc, has become a true symbol of motorcycling and is acclaimed in Italy. The black motorbike with the famous Chesterfield livery is on the front pages of all the daily newspapers, Max is the ‘Corsair’. For the first time a motorcycle rider manages to cross the boundaries of sport and becomes a celebrity on TV. Biaggi is a friend of TV presenter Fabrizio Frizzi, often goes on television, enters the Olympic stadium with his Aprilia 250 to celebrate the title. It is his moment, and he is the rider of the moment.

1996, THE PATHS WITH APRILIA SEPARATE

Except that the fairy-tale with Aprilia is now coming to an end and Max wants the 500cc class. The divorce comes about in the middle of a season he dominated, one which would have brought him a third title in 250cc conquered with the RS250. But Biaggi’s future is a long way from Noale and is precisely in the direction of Tokyo and Honda. Mick Doohan is in the middle of his period of total domination, he has been winning for three consecutive years, but one must already think about the future and Max is undoubtedly a talent to focus on.

An agreement is reached, Max will race in 250cc with Honda who want to win and beat Aprilia in 1997 and then, with the support of Phillip Morris, he would move into 500cc, in a satellite team managed by guru Erv Kanemoto and with an NSR500 very similar to those of the Honda Repsol Team, whose riders in 1998 were Doohan and Alex Criville. Max does his part, wins the 250cc title in 1997 and earns a place in the top class for the following season.

When the winter tests begin, not everyone is convinced that Max can be fast on his debut on the 500cc bike, because he is a perfect interpreter of 250cc where his clean riding style combined with excellent cornering speed and pin-point accuracy become his strong points. It’s a perfect technique for light bikes in the mid-engine category, but also a potential limit when you have almost double the horsepower to manage for a handful of extra kg on the bike. The 500s are different and are frightening.

Yet Max Biaggi flies in the first tests. He sets the best time in the IRTA tests at Jerez and in Barcelona he does it again. In these tests, Mick Doohan often doesn’t string together many laps, also because the 500 class has now reached its limit, there isn’t much development between one season and the next and basically Doohan knows he has the situation under control. Sure, that Roman guy is fast, but Mick doesn't seem worried…

The first round of the world championship is at Suzuka, the ‘temple’ of Honda. But also, the temple of the Japanese riders, who always go well here. The famous Japanese samurai, riders who every year have a fantastic opportunity to race on their home track, often with bikes at the same level as the factory machines. It is an opportunity that for some riders would change the course of their career. In the first free practice, Doohan sets the best time in front of Biaggi, but behind them there is a pack of four formidable Japanese riders who are putting up a fierce struggle. Okada, Haga, Nanba and Aoki make up a fearsome quartet, while Norick Abe is just behind, in ninth place with the Yamaha managed by Rainey.

The situation remains more or less the same in first qualifying, which at the time consisted of two sessions. One on Friday and the other on Saturday with the combined ranking between the two making up the starting grid. In the first qualifying session Doohan remains at the top, while John Kocinski also starts to appear, having returned to 500cc after taking Honda to the SBK title in 1997 with the RC45.

The times begin to drop considerably on Saturday morning, but it is in the second and decisive qualifying session that Biaggi puts in an amazing lap. He stops the clocks in 2’05.772 and enjoys the satisfaction of putting almost one second between him and Doohan. Mick, who has always been a true star in qualifying, takes stock of the situation and starts to look at the red and white NSR branded Marlboro in a different light. Biaggi might be damn fast on a dry lap, but the race, you know, is another matter…

In the warmup it is Haga who calls the shots, and when the lights go green, it’s the talented Japanese rider who everyone has to keep an eye on. At the start it’s Norick Abe who takes the lead, but Haga doesn’t need much time before he gets in front. Biaggi, who didn’t get away well from pole, is fourth in the early stages of the race, but in just a few laps he moves up into the slipstream of the two wild Japanese Yamaha riders.

It takes less than a lap for him to pass them both and start a race that no one would have imagined possible. In the meantime, Mick Doohan is in trouble. The Australian, who didn’t get a good start from third on the grid, was sixth at the end of the opening lap, but an error on lap 2 dropped him down to seventeenth position, almost at the back of the field. Doohan doesn’t lose heart however and starts to recover, but in the meantime Biaggi is pushing hard to create a gap from his rivals.

Lap after lap, Doohan makes up places and on lap 15 he is eleventh, sure of being able to take home the points for a top ten finish. But on the next lap, his Honda engine betrays him and by now Biaggi has already been out alone up front for a few laps, tracing perfect curves around a Suzuka circuit that is enthusiastically watching one of the most exciting debuts ever in the premier class of motorcycle racing.

BIAGGI ACHIEVES THE INCREDIBLE, WINS ON HIS 500cc DEBUT

Biaggi also takes the fastest lap of the race and the Honda party, ruined by the breakdown of Doohan, is compensated a bit by a second place for Okada, who passes the spectacular Haga at the finish line to grab the runner-up slot. With the chequered flag waving, Max Biaggi wins to crown a simply perfect weekend. His debut in 500cc goes far beyond the wildest expectations and even in the rest of the season the duel between Biaggi and Doohan will be the true leitmotif of 1998.

Today Biaggi is officially a MotoGP Legend. Much of that legend has also come about because of this memorable victory in Japan.

2023 marks the start of a new five-year, Kazakhstan will also become the 30th country to host a motorcycle Grand Prix since 1949
19 hours 45 min ago

The official announcement came today. The rider from Ascoli: "I have no expectations other than to return to a serene and clear climate inside the...
3 days 11 hours ago

This is the first MotoGP pole for Honda since Pol Espargaro at the British GP last year (21 races), ending the longest sequence of successive premier...
3 days 16 hours ago

“We want to thank the entire paddock and especially the Suzuki team that helped us rebuild the garage. We’re ready to start the Japanese GP.”
3 days 21 hours ago